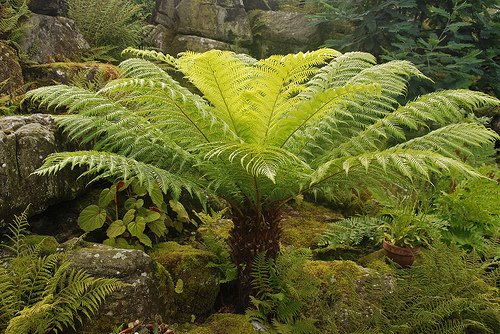 It may appear a nonsense to group approximately 12,000 species of plants under the one heading and call them ‘ferns’.  But there is great value in doing so.

Ferns are some of the oldest species of plants and have survived numerous climate changes as well as the coming and going of heavy metals, numerous possible predators,  meteorites, cosmic showers, toxins, bacteria, acrid air, acid rain, fungal attack and viral attack.  And they are still here. 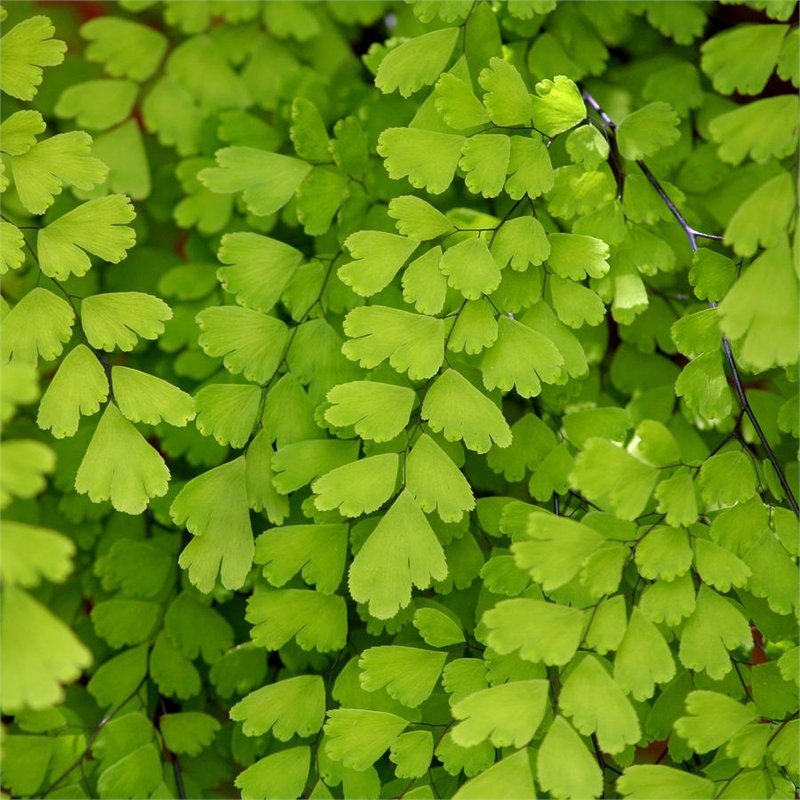 Ferns are “not of major economic importance” according to Wikipedia.  This may be something of a godsend from the ferns’ point of view, as they have not been bred or exploited into extinction.  But some are gathered for food, some are grown as ornamental plants, and they have been the subject of intense research recently, as they are extremely effective bioremediators of soils so contaminated, little else would grow. They have also been the subject of research for their ability to remove chemical pollutants from the air.

Ferns now have their own phylum or division in the plant kingdom, called Pteridophyta. The botanical names are almost unpronounceable – try saying Ophioglossaceae with a mouth full of pudding – but the common names conjure up a world of fairies and elves, dwarves and little spirits of the forest - adders-tongue, moonwort, grape-fern, whisk fern, horsetail, quillwort. 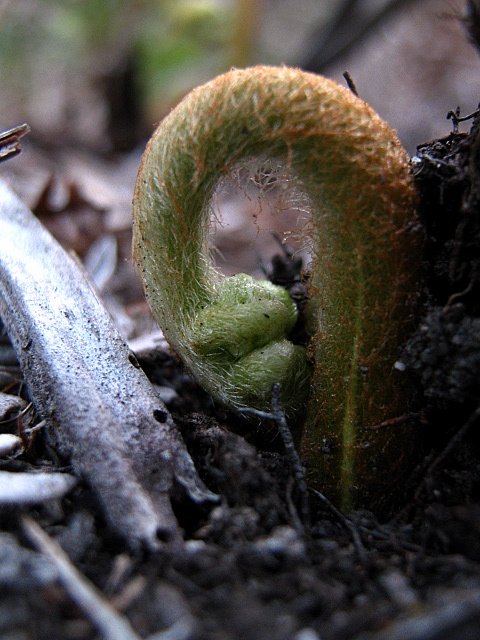 The myths of old used all the wonderful qualities of ferns and wove them into legend.  In Slavic folklore, ferns are believed to bloom once a year, during the Ivan Kupala night. Anyone who sees a "fern flower" is thought to be guaranteed to be happy and rich for the rest of their life. Finnish tradition holds that one who finds the "seed" of a fern in bloom on Midsummer night will be able to travel invisibly to the locations where eternally blazing Will o' the wisps called aarnivalkea mark the spot of hidden treasure – which rather implies that some ferns contain hallucinogens – or are poisonous!

There is a marvellous quote by two honest researchers - Rai and Graham (2010) – who broadly supported the main groups, but concluded that "at present perhaps the best that can be said about all relationships among the major lineages of monilophytes in current studies is that we do not understand them very well".  I guess something 360 million years in the making can prove a challenge, even to a PhD student. 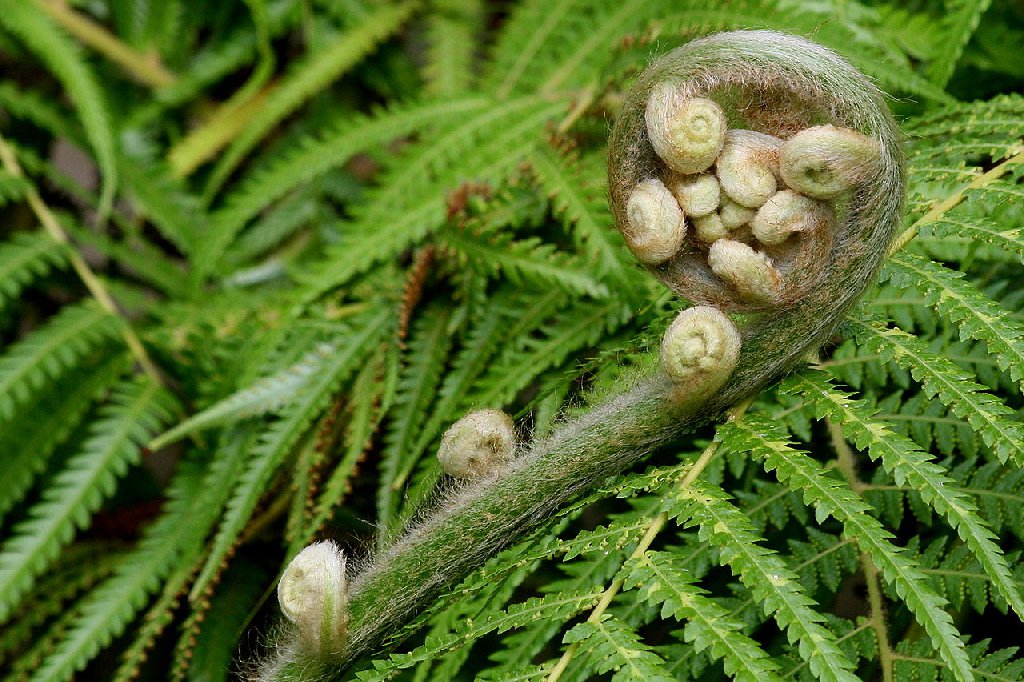 Ferns reproduce via spores and have neither seeds nor flowers. They differ from mosses by being ‘vascular’ i.e. having water-conducting vessels. They have stems and leaves, like other vascular plants and most ferns have what are called fiddleheads that expand into fronds, which are each delicately divided.

Fern stems are often referred to as "rhizomes", even though they grow underground only in some of the species. Epiphytic species and many of the terrestrial ones have above-ground creeping stolons – in biology the word stolon is simply another word for a runner.

Many groups have above-ground erect semi-woody trunks. These can reach up to 20 metres (66 ft) tall in a few species – the so called ‘tree ferns’. 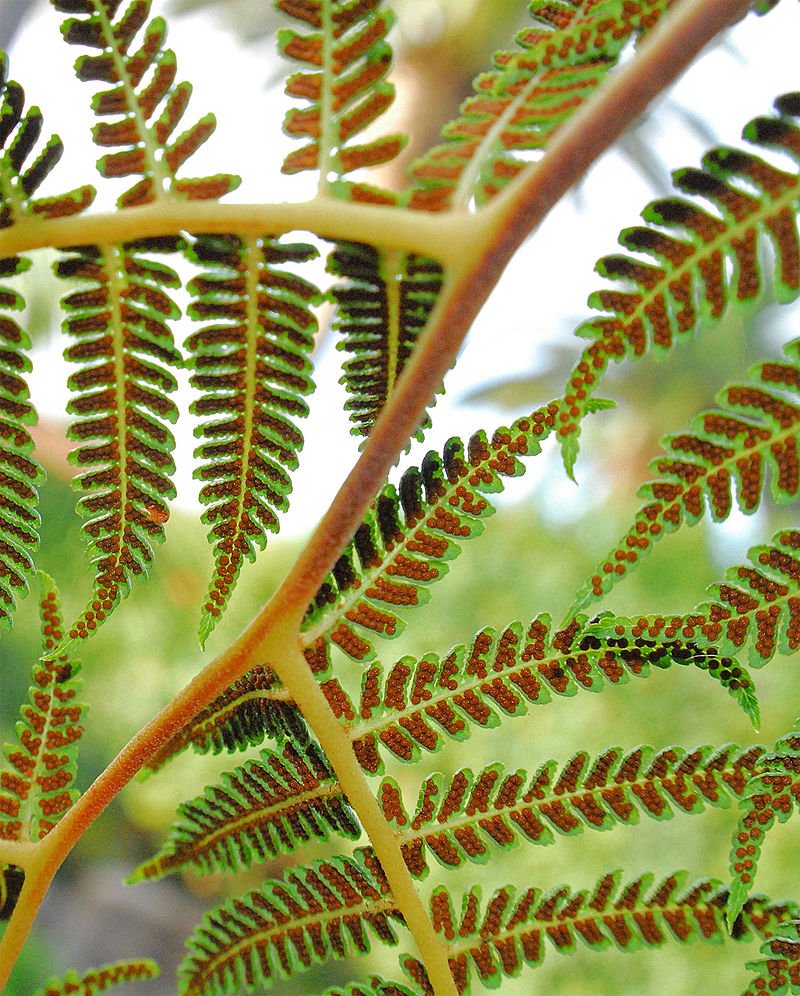 The green, photosynthetic part of the plant – the leaf -  is technically a megaphyll and in ferns, it is often referred to as a frond. New leaves typically expand by the unrolling of a tight spiral called a "crozier" or "fiddlehead".   Leaves are divided into two types a trophophyll and a sporophyll.

The anatomy of fern leaves can either be simple or highly divided. In tree ferns, the main stalk that connects the leaf to the stem (known as the stipe), often have multiple leafy structures that grow from the stipe, known as "pinnae" and are often again divided into smaller pinnules.

In all this complex biological description, it is rare for descriptions to say just how very beautiful ferns are.  They are perfection. 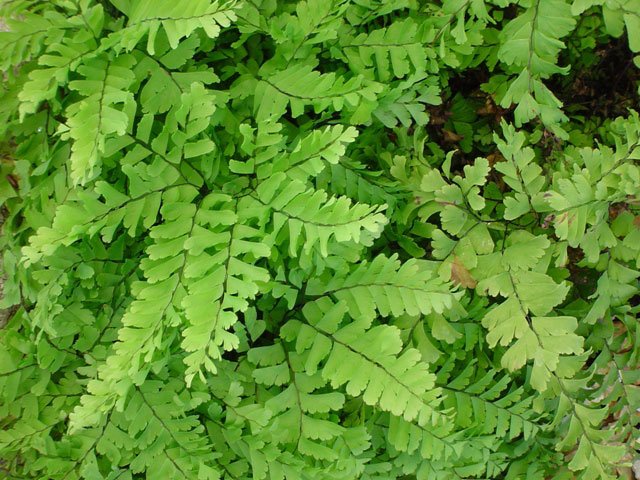 Ferns do have roots - underground non-photosynthetic structures that take up water and nutrients from the soil. The roots of ferns are always fibrous and are structurally very similar to the roots of seed plants.

But probably the most fascinating aspect about ferns is their babies. The ‘gametophytes’ of ferns  are very different from those of seed plants.  Ferns produce sperm and they are flagellate – they swim.  What is more they swim towards the ‘Archegonia’ – a “flask-shaped structure that produces a single egg at the bottom, reached by the sperm by swimming down the neck”.  Admittedly the sperm are not produced by anything resembling a penis – in ferns it is called the Antheridia, and is a small spherical structure.  The life cycle is in fact more complex than I have whimsically described, and is shown by the diagram below.

The stereotypical image of ferns growing in moist shady woodland nooks is far from a complete picture of the habitats where ferns can be found growing.

Fern species live in a wide variety of habitats, from remote mountain elevations, to dry desert rock faces, to bodies of water or in open fields. Ferns in general may be thought of as largely being specialists in marginal habitats, often succeeding in places where various environmental factors limit the success of flowering plants. 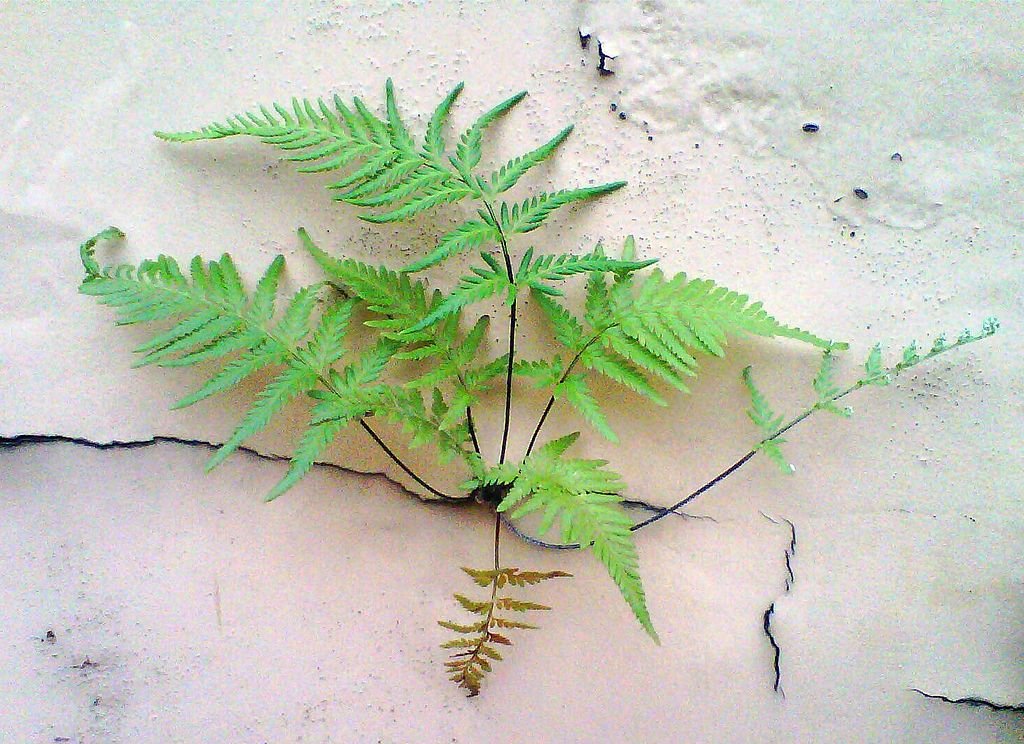 Some ferns are considered serious weeds, but not enough thought is given as to why the ferns are thriving.  We have a separate entry for bracken – which is a type of fern.  It is thriving because we are polluting the environment at such a terrifying rate.  Bracken sucks in air pollutants and ground pollutants like a vacuum cleaner and is immensely valuable in many ways.  There is a fern called the mosquito fern (Azolla) which grows in tropical lakes, forming ‘large aggressively spreading colonies’. What we should be asking is why is it doing this?  Ferns of the genus Azolla are very small, floating plants that are able to fix nitrogen.  So why are they thriving?  Maybe too much nitrogen?  There are ferns that thrive on lead, cadmium, mercury.  Ferns that gobble up arsenic. 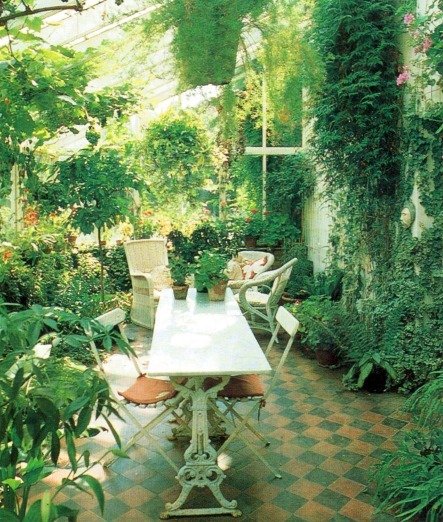 Perhaps in very ancient days, ferns cleaned up after the dinosaurs had farted so much methane into the atmosphere, they created a climate in which the plants they ate died off.  I jest, or maybe I don’t, but there is every reason to believe ferns will be there long after we have metaphorically farted ourselves off the face of the earth, cleaning and chelating just as they have done for the past 360 million years.

The interwoven pattern of life

There are four particular types of habitats that ferns are found in: moist, shady forests; crevices in rock faces, especially when sheltered from the full sun; acid wetlands including bogs and swamps; and tropical trees, where many species are epiphytes.

Something like a quarter to a third of all fern species are epiphytes.  The epiphytic ferns are the hosts of a huge diversity of invertebrates. For example, bird's-nest ferns alone contain up to half the invertebrate biomass within a hectare of rainforest canopy.

Some ferns form associations with mycorrhizal fungi. This mutualistic association provides the fungus with relatively constant and direct access to carbohydrates, such as glucose and sucrose. The carbohydrates are translocated from their source (usually leaves) to root tissue and on to the plant's fungal partners. In return, the plant gains the benefits of the mycelium's higher absorptive capacity for water and mineral nutrients due to the large surface area of fungal hyphae, which are much finer than plant roots, thus improving the plant's mineral absorption capabilities. 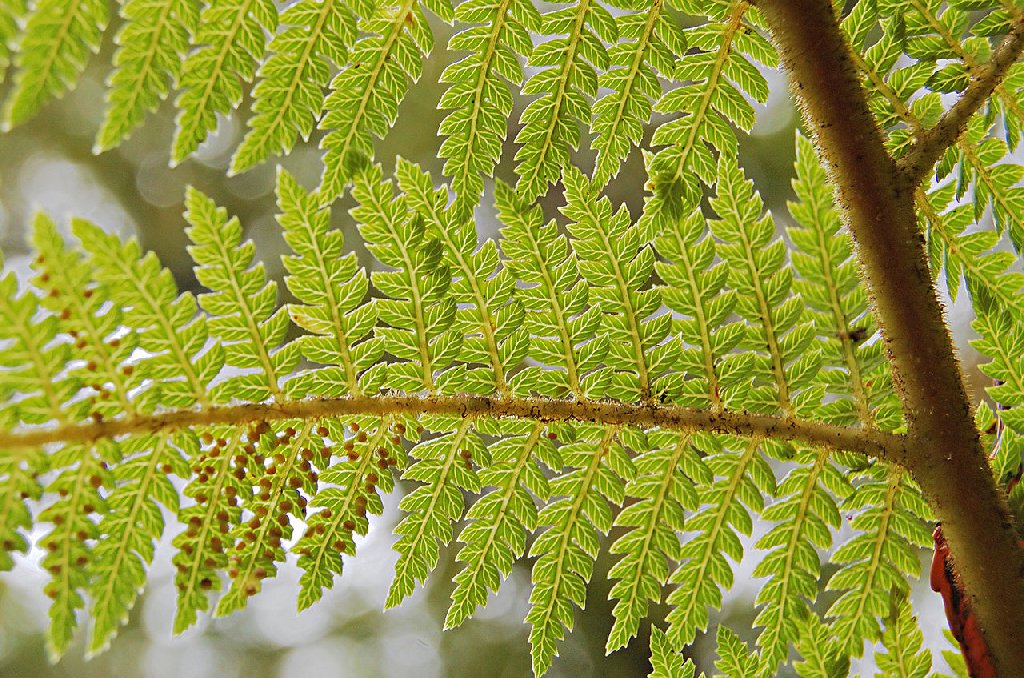 Many ferns only grow within specific pH ranges; for instance, the climbing fern (Lygodium palmatum) of eastern North America will only grow in moist, intensely acid soils, while the bulblet bladder fern (Cystopteris bulbifera), with an overlapping range, is only found on limestone.  Both in their turn and over many many years help to balance these environments.

The spores are rich in lipids, protein and calories, so some vertebrates eat these. The European woodmouse (Apodemus sylvaticus) has been found to eat the spores of Culcita macrocarpa and the bullfinch (Pyrrhula murina) and the New Zealand lesser short-tailed bat (Mystacina tuberculata) also eat fern spores.  They are brave souls

A mouse that eats ferns like a dinosaur - by Matt Walker Editor, BBC Earth News

The European woodmouse …… regularly devours the spores of the endemic European fern Culcita macrocarpa, the only small mammal known to do so. It is rare for modern vertebrates to eat ferns, due to the toxic chemical defences often contained within them.


People have relied on ferns for food. 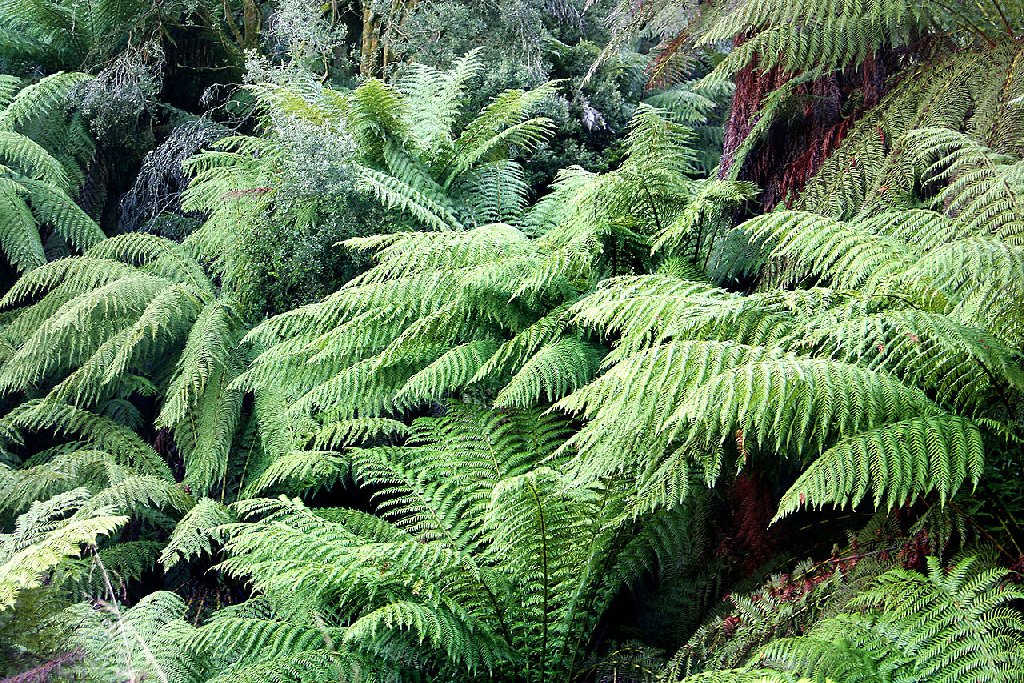 The fiddleheads of Pteridium aquilinum, ostrich fern, Matteuccia struthiopteris, and cinnamon fern, Osmundastrum cinnamomeum have been used as food. Tubers from the King Fern or para (Ptisana salicina) are a traditional food in New Zealand and the South Pacific. Fern tubers were used for food 30,000 years ago in Europe.

Fern tubers were used by the Guanches, the original inhabitants of the Canary Islands, to make gofio. Gofio is the Canarian name for a type of flour, it is thought to have been the main staple of the diet of the Guanches, who produced it from barley and the rhizome of certain ferns. The latter is also known to have been used in historical times, especially in famine, even up till the 20th century.

So in their own beautiful unobtrusive and understated way they support the planet and have always done so.  The first First Nation.

Every observation specifically mentions the species of fern being described.  Bracken has its own entry and its observations are not repeated here.