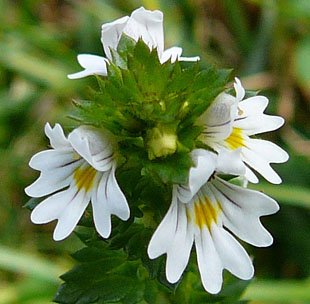 Euphrasia (Eyebright) is a genus of about 450 species of herbaceous flowering plants in the family Orobanchaceae (formerly included in the Scrophulariaceae), with a cosmopolitan distribution.

They are semi-parasitic on grasses and other plants. The common name refers to the plant's use in treating eye infections.

Many species are found in alpine or sub-alpine meadows where snow is common. Flowers usually are borne terminally, are zygomorphic, and have a lower petal shaped like a lip. The most common flower colours are purple, blue-white, and violet. Some species have yellow markings on the lower petal to act as a guide to pollinating insects.

Use in herbalism and medicine 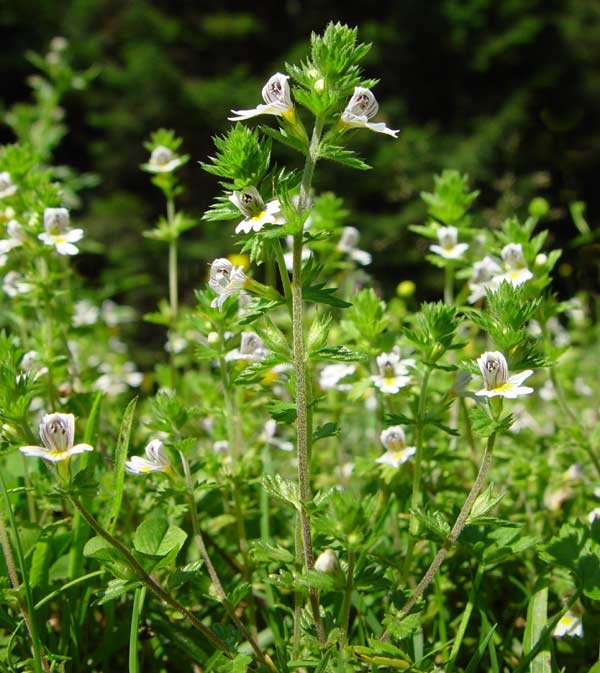 Some of the advice given for Eyebright is simply dangerous.  It is derived from beliefs several hundred years old and unrelated to tried and tested uses.  Mrs Grieve [see observation] explains the problem well.

But there is evidence starting to emerge that the use of the plant as a warm compress or poultice on closed eyes that are irritated, red and swollen does have some foundation in fact.  Many eye problems are caused by bacterial infection, parasitic or even viral infections and Eyebright has antiparasitic, anti-viral and anti-bacterial activity according to Dr Duke’s analysis.

Blepharitis, for example, is a common eye condition characterized by chronic inflammation of the eyelid, resulting in inflamed, irritated, itchy, and reddened eyelids. It can be caused by the oil glands at the base of the eyelashes becoming clogged, but it can also be caused by a bacterial infection [for example staphylococcal bacteria]; various viruses such as herpes simplex, varicella-zoster, and molluscum contagiosum; and parasitic infections by for example the Demodex mites and Phthiriasis palpebrarum lice. 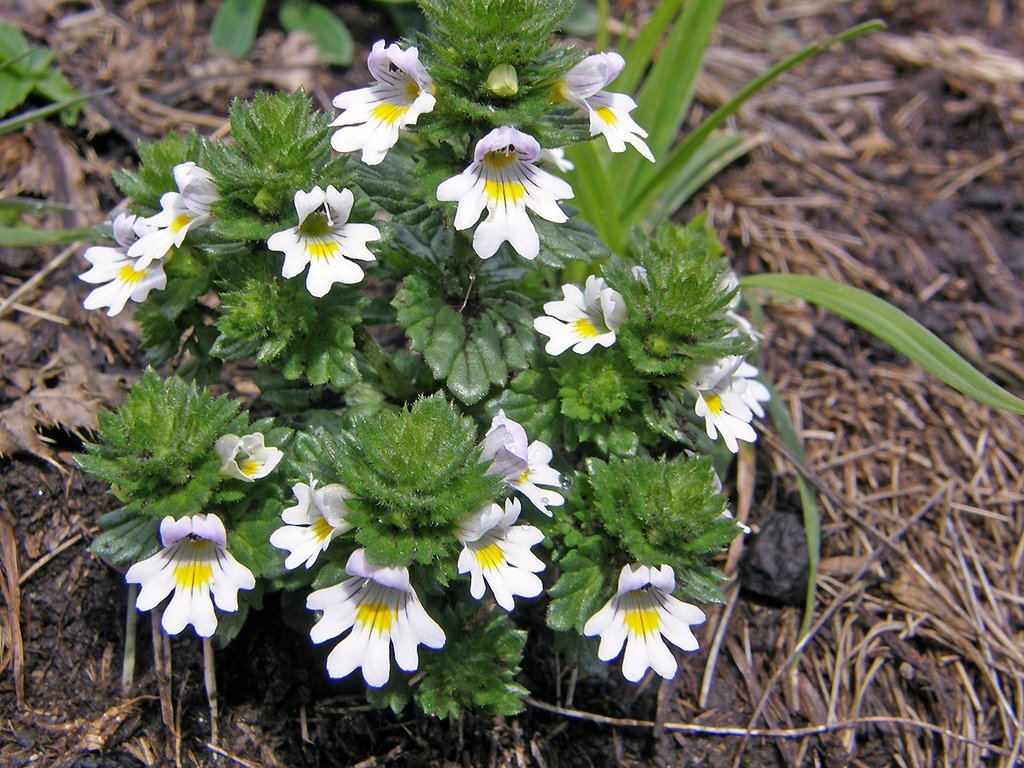 Conjunctivitis, also known as pink eye is inflammation of the conjunctiva (the outermost layer of the eye and the inner surface of the eyelids). It is commonly due to an infection - usually viral, but sometimes bacterial or parasitic, or an allergic reaction.

In effect, for some of these eye diseases, the folk medicine beliefs may have some basis in fact because Eyebright deals with the CAUSE of the problem as opposed to just relieving the symptoms.

Dr James Duke’s analysis show that Eyebright is specifically Antikeratitic.  Keratitis is a condition in which the eye's cornea, the front part of the eye, becomes inflamed. The condition is often marked by moderate to intense pain and usually involves any of the following symptoms: pain, impaired eyesight, photophobia, red eye and a 'gritty' sensation.  River blindness can result from some sorts of keratitis, as such the possible uses of Eyebright suddenly take on even more importance.  If this little flower can indeed help prevent people going blind, it is indeed a wonderful plant.

Even styes are caused by bacterial infection, again, Eyebright is antibacterial.

Herbalists also use a cold compress for eyestrain and to relieve inflammation caused by colds, coughs, sinus infections, and sore throats.  There are chemicals in Eyebright that are anti-inflammatory, thus they may help with eye strain.  But all the latter problems are viral again – and as already stated Eyebright is an anti-viral. 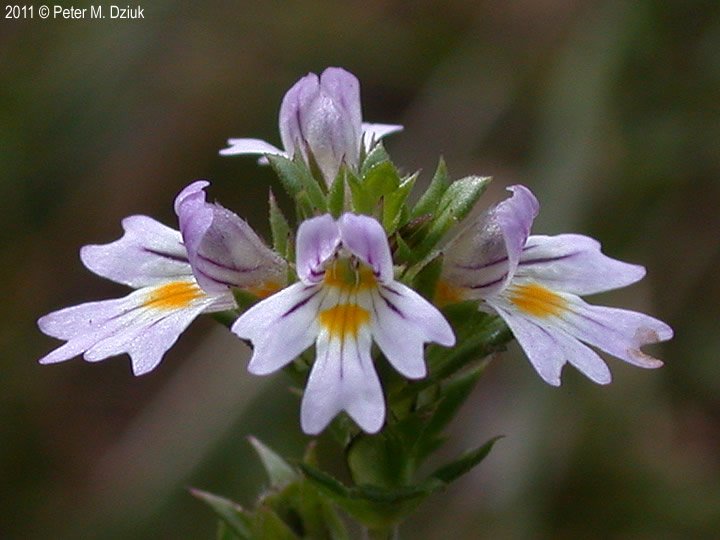