Coriander (Coriandrum sativum), also known as cilantro, Chinese parsley or dhania, is an annual herb in the family Apiaceae. Coriander is native to regions spanning from southern Europe and North Africa to southwestern Asia.

In cooking both the leaves and the seed can be used. The leaves are variable in shape, broadly lobed at the base of the plant, and slender and feathery higher on the flowering stems. The fruit is a globular, dry schizocarp 3–5 mm (0.12–0.20 in) in diameter.

There are also studies showing Coriander helps with “anxiety and insomnia, cholesterol problems, oedema, and indigestion”! Coriander has also been used as a traditional treatment for type 2 diabetes.
Of great interest, is that Coriander leaf was found to prevent deposition of lead in mice, due to a presumptive chelation of lead by substances in the plant.

The table below shows some of the mineral and vitamin content of coriander seeds. The seeds also provide manganese. They have a lemony citrus flavour when crushed, due to terpenes linalool and pinene. It is described as warm, nutty, spicy, and orange-flavoured.
Source: US National Nutrient Database for Standard Reference
Release 26   Software v.1.3.1 Nutrient values and weights are for edible portion

The nutritional profile of coriander seed is different from the fresh stems and leaves, the vitamin content being less than amounts being displayed in the chart below for the plant, with some being absent entirely. 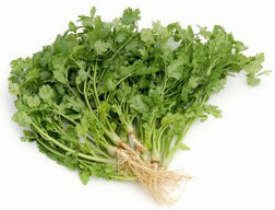 All parts of the plant are edible, but the fresh leaves and the dried seeds are the parts most traditionally used in cooking. Wikipedia states that “Coriander is common in South Asian, Southeast Asian, Indian, Middle Eastern, Caucasian, Central Asian, Mediterranean, Latin American, Portuguese, Chinese, African, and Scandinavian cuisine”! In effect, it is used world-wide.

The leaves can be cooked or eaten raw in salads, and sprinkled on dishes before cooking. As heat diminishes their flavour, coriander leaves are usually added to the dish immediately before serving.  'The leaves spoil quickly when removed from the plant, and lose their aroma when dried or frozen'.

Chopped with avocados, lemon, salt and sugar with a little spring onion they make a tasty addition to grills and chillis. Added to chopped tomato, spring onion, lemon juice and sugar they can be used with fish.

Coriander seed can be roasted and ground, or simply ground, in spice mixtures. Ground coriander seed loses flavour quickly in storage and is best ground fresh. If cooked with wholegrain rice, as a whole spice and chopped mint and butter added after cooking, it is delicious with lamb chops.

Coriander seed is a spice in garam masala and Indian curries, which often employ the ground fruits in generous amounts together with cumin. It acts as a thickener.