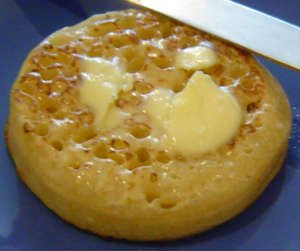 Butter is a dairy product that consists of butterfat, milk proteins, and water.  I have also covered it under the more generic heading of Dairy products, as butter, cheese and milk all derive from the same source, however, this section enables me to add some more specific information about butter itself.

Butter is made by churning fresh or fermented cream. Commonly made from cows' milk, butter can also be made from the milk of other mammals, including sheep, goats, buffalo, and yaks. Producers sometimes add salt, which helps to preserve the butter and enhances the flavour.

Before modern factory butter making, cream was usually collected from several milkings and was therefore several days old and somewhat fermented by the time it was made into butter. Butter made from a fermented cream is known as cultured butter. During fermentation, the cream naturally sours as bacteria convert milk sugars into lactic acid. The fermentation process produces additional aroma compounds, including diacetyl, which makes for a fuller-flavoured and more "buttery" tasting product.

Across northern Europe, cultured butter was at one time packed into barrels (firkins) and buried in peat bogs, sometimes for years, to preserve it. Such "bog butter" would develop an exceptionally strong flavour as it aged, but remained edible, in large part because of the unique cool, airless, antiseptic and acidic environment of a peat bog. Firkins of such buried butter are a common archaeological find in Ireland.  The practice was most common in Ireland in the 11th–14th centuries; it ended entirely before the 19th century.

But here we may have an interesting correlation between cholesterol and health. If the butter has a strong buttery taste, a person has no need to put masses of it on bread, vegetables or potatoes to get the flavour or the nutrient value. It is only when the butter is lacking in flavour that overdose may occur and indeed both the UK and the USA suffer from high cholesterol problems [leaving aside the other causes of high cholesterol – see blood circulatory problems].

It may be worth noting that true farmhouse butter made in the traditional way is also more nutritionally 'balanced' than some commercial butter. Commercial butter is about 80% butterfat and 15% water; traditionally made butter may have as little as 65% fat and 30% water. 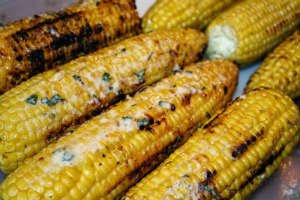 Butter can be used as a spread and a condiment and in cooking, such as baking, sauce making and pan frying.

Clarified butter is butter with almost all of its water and milk solids removed, leaving almost-pure butterfat. Clarified butter is made by heating butter to its melting point and then allowing it to cool; after settling, the remaining components separate by density. At the top, whey proteins form a skin, which is removed. The resulting butterfat is poured off from the mixture of water and casein proteins that settle to the bottom.

Ghee is clarified butter that is brought to higher temperatures of around 120 °C (250 °F) after the water evaporates, so the milk solids brown. This flavors the ghee, and also produces antioxidants that help protect it longer from rancidity. Because of this, ghee can keep for six to eight months under normal conditions.  Ghee is a staple in Indian cooking and replaces vegetable oil as a cooking ingredient.

We all know the obvious and simple uses for butter.  But it is a surprisingly versatile cooking ingredient. 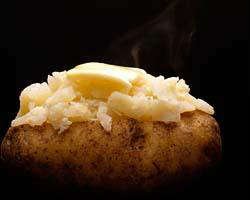 Once butter is softened, spices, herbs, or other flavourings can be mixed into it, producing little pats of flavoured butter that can be put on fish or vegetables or meat. A mixture of chopped egg, gherkin, capers and lemon rind for example, added to butter in pats is called Montpellier butter and is wonderful on plain steamed or grilled fish. Chopped fresh herbs added to butter can be put on steaks, lamb chops or fish – all grilled or barbecued - and thus plainly cooked. It doesn't actually matter which herbs. Any combination seems to work well.

Beurre noisette (nut butter) and Beurre noir (black butter) are sauces of melted butter cooked until the milk solids and sugars have turned golden or dark brown; they can be finished with an addition of a little lemon juice and are used on fish dishes such as skate.

Hollandaise and béarnaise sauces are emulsions of egg yolk and melted butter; with lemon juice added or, in the case of bearnaise sauce, tarragon. These sauces are delicious on vegetables especially asparagus. Bearnaise sauce works well with grilled chicken breasts.

Beurre blanc (white butter) is made by whisking butter into reduced vinegar or wine, forming an emulsion with the texture of thick cream.  Again it goes well with plain vegetables, meat or fish.  It is very nice on cauliflower.

Beurre monté means to whisk cold butter into any water-based sauce at the end of cooking, giving the sauce a thicker body, a glossy shine, a smooth creamy texture as well as a buttery taste. This approach works well with chocolate sauces.

So as you can see butter is an exceptionally useful ingredient.  To stop butter burning when you fry food, add a little vegetable oil.

The following table describes salted butter, which is why the sodium content is quite high.

What is of exceptional importance in this chart, is the very high level of both Vitamin D and Vitamin A in butter.  Vitamin D is found in very few foods and the only other source is sunlight, as such our move away from butter and the outdoor life has resulted in large sections of the populations of western countries being unknowingly Vitamin D deficient.  The observations from Pubmed help to show the importance of butter in our diet.

All the observations for Butter describe its healing properties.  In effect, the spiritual experience from butter is healing.

For thousands of years butter was recognised as having health giving properties. In Natural History, Pliny the Elder called butter "the most delicate of food among barbarous nations", and went on to describe its medicinal properties. Later, the physician Galen also described butter as a medicinal agent only.

It is probably only in the last 60 years that we have started to believe that butter is somehow 'bad for us'.  Why?

In the 1940s, United States cardiologist Ancel Keys promoted the idea that increased cholesterol was a cause of increased heart disease. It is from his research that we have this idea that somehow butter is 'not good'. But this idea is wholly false. In the first place cholesterol is a symptom of underlying disease not a cause of it. [see blood circulatory problems].

There has been an increase in toxins in the environment, heavy metals, bacteria, viruses and parasites, cholesterol is a symptom of this increase.  Cholesterol is there to ease inflammation and help healing.  Tackle the cause not the symptoms.

It is also worth adding that yet other studies report that saturated fats are more healthy than the trans-fat substitutes marketed to replace them. More margarine than butter is eaten in the U.S and it is the US that has the worst record for heart problems.