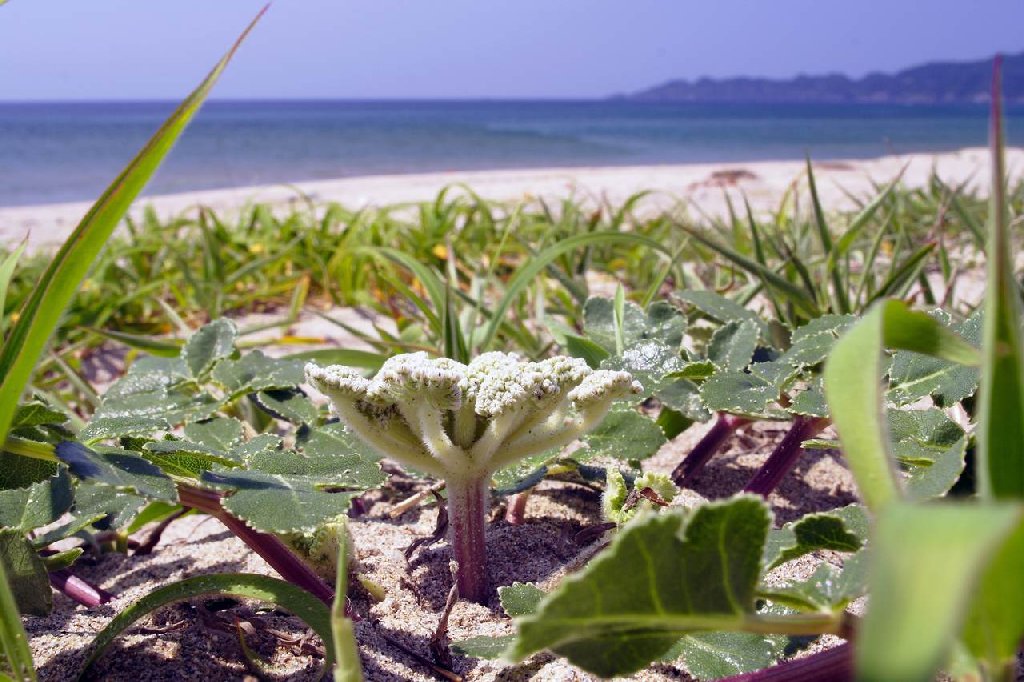 Glehnia littoralis (in the monotypic genus Glehnia) is a species of plant in the "carrot family", Apiaceae, known by several common names including beach silvertop and American silvertop in English, and bei sha shen (Chinese: 北沙參) and shan hu cai (Chinese: 珊瑚菜) in Chinese.

It is native to eastern Asia, particularly eastern China, Japan, and far-eastern Russia, and western North America from Alaska to northern California.

It is a long-taprooted plant forming a basal patch of leaves, with each leaf made up of several rounded, lobular segments. It reaches a maximum height exceeding half a meter and its erect stem is topped with an umbel of carrotlike white flowers.

Great care must be taken with this plant as there are toxic chemicals in it.  Thus although the observations show the analysis and potential of the plant, it should not be consumed.

From the underground parts of Glehnia littoralis FR. Schmidt ex Miquel (Umbelliferae), 26 compounds, including two new lignan glycosides [giehlinosides A (1) and B (2)], a new neolignan glycoside [glehlinoside C (3)], and a new phenylpropanoid glycoside 14-[beta-D-apiofuranosyl-(1-->6)-beta-D-glucopyranosyloxyl-3-methoxypropiophenone (4)1, were obtained and their structures were determined by analysis of their spectral data. The 1,1-diphenyl-2-picrylhydrazyl radical-scavenging assay disclosed quercetin (8), isoquercetin (9), rutin (10), chlorogenic acid (11), and caffeic acid (24) as the major antioxidative constituents in this crude drug. PMID: 11824588