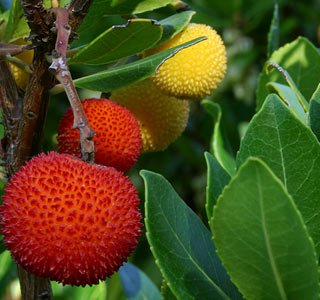 Arbutus unedo (strawberry tree) is an evergreen shrub or small tree in the family Ericaceae, native to the Mediterranean region and western Europe north to western France and Ireland.

Due to its presence in southwest and northwest Ireland, it is known there as either "Irish strawberry tree", or cain or cane apple (from the Gaelic name for the tree, caithne), or sometimes "Killarney strawberry tree".

The name unedo is attributed to Pliny the Elder, who allegedly claimed that "unum tantum edo", meaning "I eat only one".

The Central panel of The Garden of Earthly Delights by Hieronymus Bosch, was first described by José de Sigüenza as "The Painting of the Strawberry Tree".  The tree also makes up part of the Coat of arms of Madrid (El oso y el madroño, The Bear and the Strawberry Tree). In the centre of the city (Puerta del Sol) there is a statue of a bear eating the fruit of the Madroño tree.

Arbutus unedo was one of the many species described by Carl Linnaeus in Volume One of his 1753 work Species Plantarum, giving it the name it still bears today. 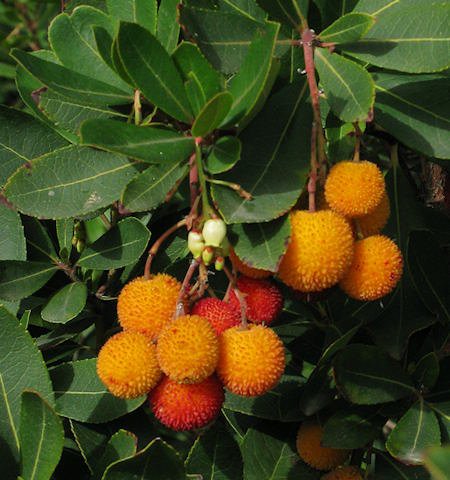 A study published in 2001 which analyzed ribosomal DNA from Arbutus and related genera found Arbutus to be paraphyletic, [(of a group of organisms) descended from a common evolutionary ancestor or ancestral group, but not including all the descendant group ] and A. unedo to be closely related to the other Mediterranean Basin species such as A. andrachne and A. canariensis and not to the western North American members of the genus.

Arbutus unedo and A. andrachne hybridise naturally where their ranges overlap; the hybrid has been named Arbutus × andrachnoides (syn. A. × hybrida, or A. andrachne × unedo), inheriting traits of both parent species, though fruits are not usually borne freely, and as a hybrid is unlikely to breed true from seed. It is sold in California as Arbutus x Marina named for a district in San Francisco where it was hybridized. 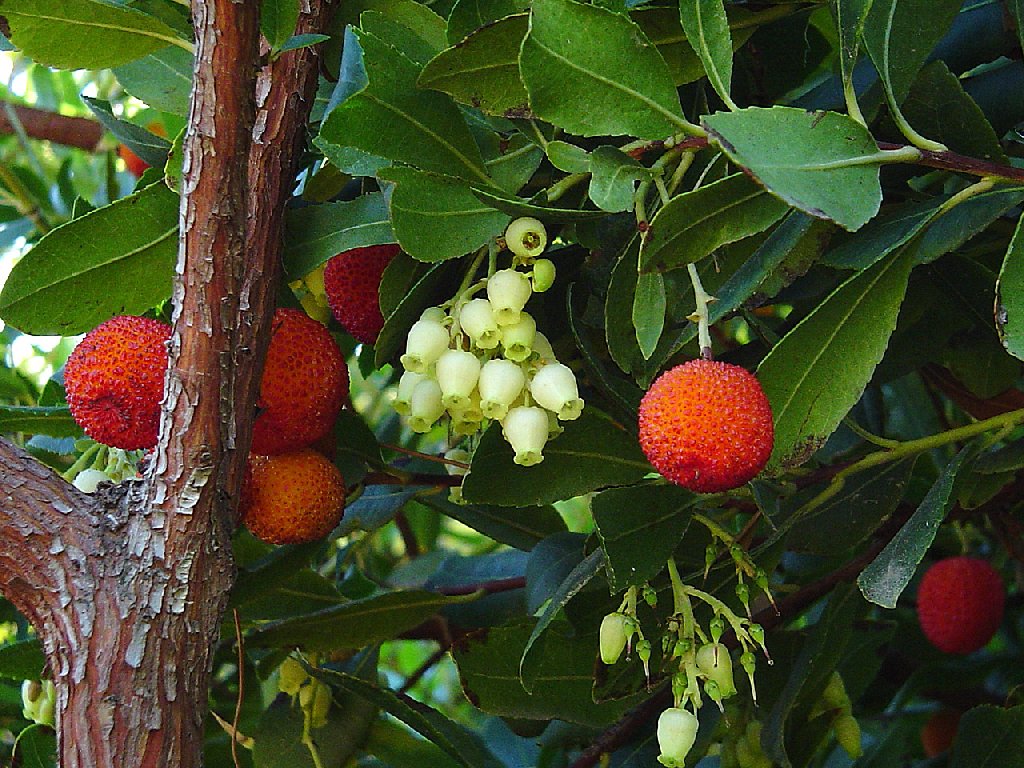 The hermaphrodite flowers are white (rarely pale pink), bell-shaped, 4–6 mm diameter, produced panicles of 10–30 together in autumn. They are pollinated by bees.

The fruit is a red berry, 1–2 cm diameter, with a rough surface. It matures in about 12 months, in autumn, at the same time as the next flowering. It is edible; the fruit is sweet when reddish, and 'tastes similar to a fig'. 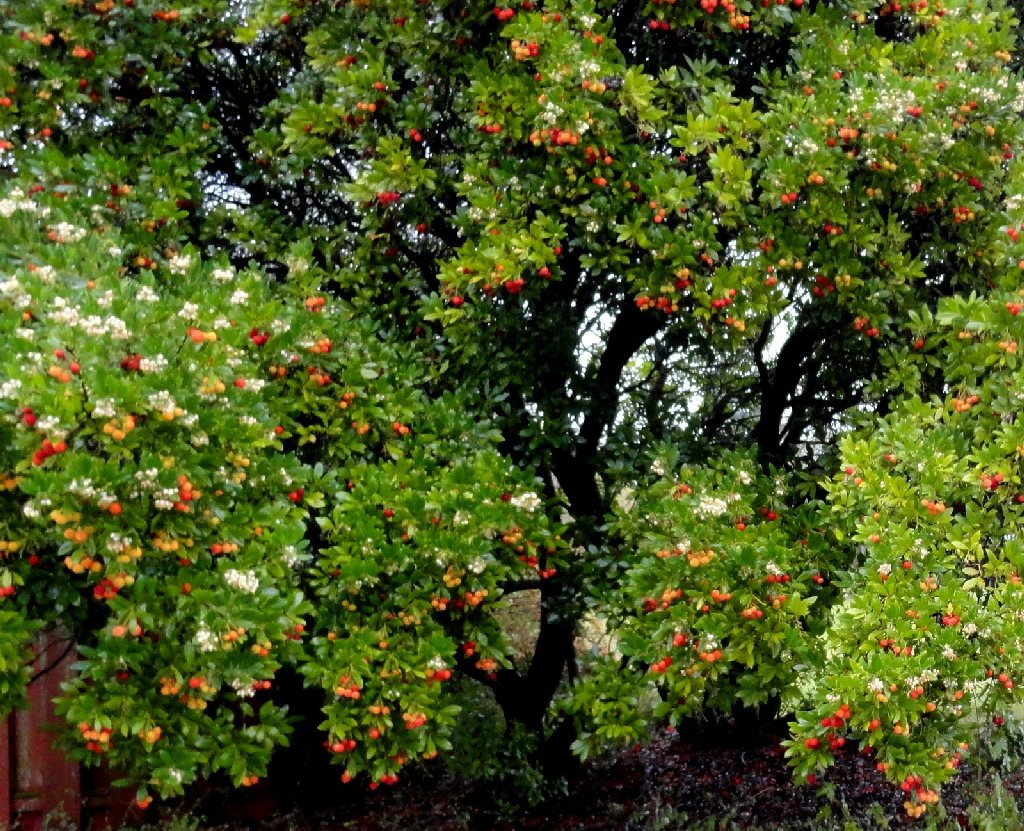 Arbutus unedo is widespread in the Mediterranean region: in Portugal, Spain and southeastern France; southward in Algeria, Morocco, and Tunisia, and eastward in Italy, Croatia, Greece, Turkey, Cyprus, Lebanon, and Syria. It is also found in western France, Albania, Bulgaria and southwestern Ireland.

Wikipedia
Its disjunct distribution, with an isolated relict population in southwestern and northwestern Ireland, notably in Killarney and around Lough Gill in County Sligo, which is its most northerly stand in the world, is a remnant of former broader distribution during the milder climate of the Atlantic period, the warmest and moistest Blytt-Sernander period, when the climate was generally warmer than today. The red-flowered variant, named A. unedo rubra by William Aiton in 1785, was discovered growing wild in Ireland in 1835. 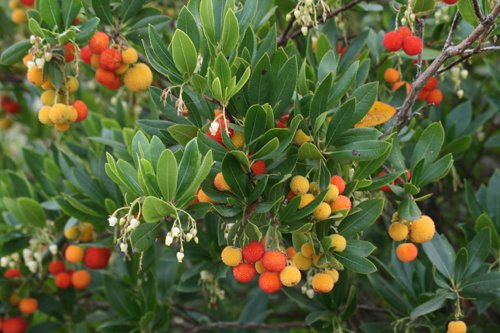 Arbutus unedo has been cultivated for its aesthetic appeal and its fruits – used as both medicine and food, for thousands of years.  Pliny mentioned it and it was first imported to northern European gardens in 16th-century England from Ireland. In 1586 a correspondent in Ireland sent plants to the Elizabethan courtiers Lord Leicester and Sir Francis Walsingham.  The Irish association of Arbutus in English gardens is reflected in the inventory taken in 1649 of Henrietta Maria's Wimbledon: "one very fayre tree, called the Irish arbutis standing in the midle parte of the sayd kitchin garden, very lovely to look upon".  In the United States, Thomas Jefferson lists the plant in his Monticello gardens in 1778.

The form A. unedo f. rubra and the hybrid A. × andrachnoides, have gained the Royal Horticultural Society's Award of Garden Merit.

The plant prefers well-drained soils, low to moderate soil moisture and grows well in basic (limy) pH soils. In cold climates it prefers a sheltered position due to its late flowering habit.  Arbutus unedo is naturally adapted to dry summer climates and will thus grow in regions with Mediterranean climates, but it also grows well in the cool, wet summers of western Ireland and England, and temperate regions of Europe and Asia.

In the UK the gardens at Dunster Castle include the National Plant Collection of Strawberry Trees—A. unedo. During the early 1980s the steep banks on the south side of the castle were planted with over four hundred specimens. With the nine cultivars that were acquired at a later date, this constitutes the "National Arbutus Collection". 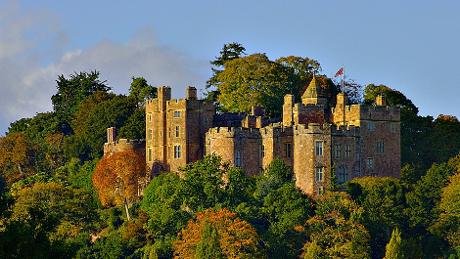 The decorative nature of the tree, its historic significance and its use as a simple food, have rather overshadowed its medicinal uses.  Arbutus has long been used in folk medicine and Dr Duke's analyses somewhat justify its importance.

But it is not the fruit which is used, which is why we have placed this plant under the medicines category.  It is the bark and the leaf.  The fruit, in fact, has received less than rave reviews from such worthies as Mrs Grieve

When eaten in quantities this fruit is said to be narcotic, and the wine made from it in Spain has the same property.

The tree is common in the Mediterranean region, and the fruit was known to the ancients, but according to Pliny (who gave the tree the name of Arbutus) was not held in much esteem, as the name implies (un ede=one 1 eat), the fruits being considered so unpalatable, that no one tasting them for the first time would be tempted to repeat the experiment. Nevertheless, there is some evidence that at one time the fruit was an article of diet with the ancients. Horace praises the tree for its shade and Ovid for its loads of 'blushing fruit.' Virgil recommends the young shoots as winter food for goats and for basket-work.

Gerard speaks of it in his time as growing in 'some few gardens,' and says, 'the fruit being ripe is of a gallant red colour, in taste somewhat harsh, and in a manner without any relish, of which thrushes and blackbirds do feed in winter .'

In Spain, a sugar and spirit have been extracted from the fruit and a wine made from it in Corsica.

The observations provide more details of its use medicinally.