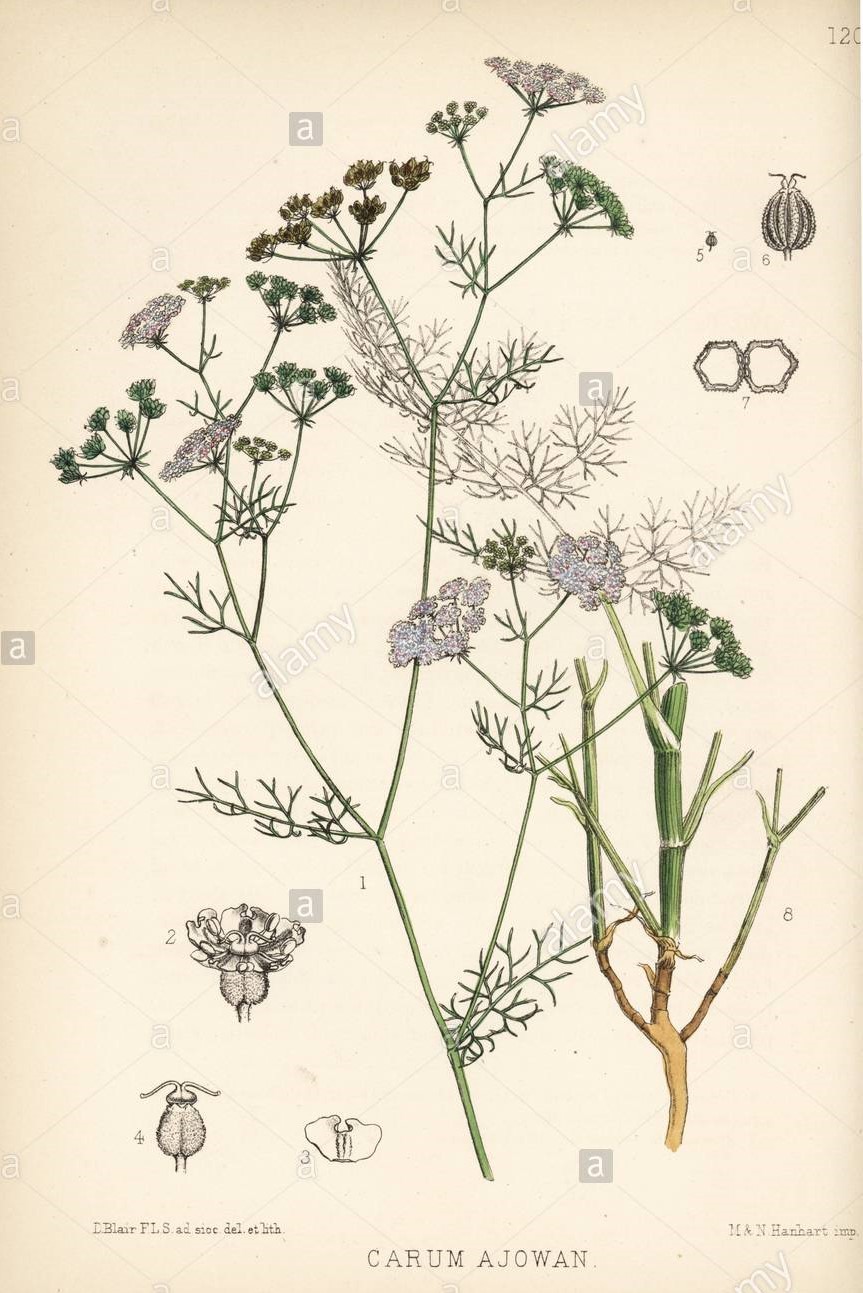 Ajwan or Ajwain, ajowan (pronounced aj’o-wen) -  Trachyspermum ammi—is an annual herb in the family Apiaceae (or Umbelliferae).  The Umbelliferae family has some 2,700 members including dill, caraway and cumin.  The correct botanical nomenclature is Family: Apiaceae; Genus: Trachyspermum and Species: T. ammi.

The plant originated in India and the seed‑like fruit (often mistakenly called seeds) is used in Indian cooking. “It is particularly suited to the delicate vegetarian fare found in the state of Gujarat”.

Ajwain is native to India and the plant is mainly cultivated in Iran and India. Rajasthan produced about 55% of India's total output in 2006.  Ajwain is also cultivated in Egypt, Pakistan and Afghanistan.

According to Flora of Tropical East Africa. 1989 , Ajwain is an annual herb, ± 25–65 cm. tall, much branched from near the base upwards, with long divergent or more divaricate branches; stem and branches glabrous, slender, striate and terete or the stem somewhat sulcate. 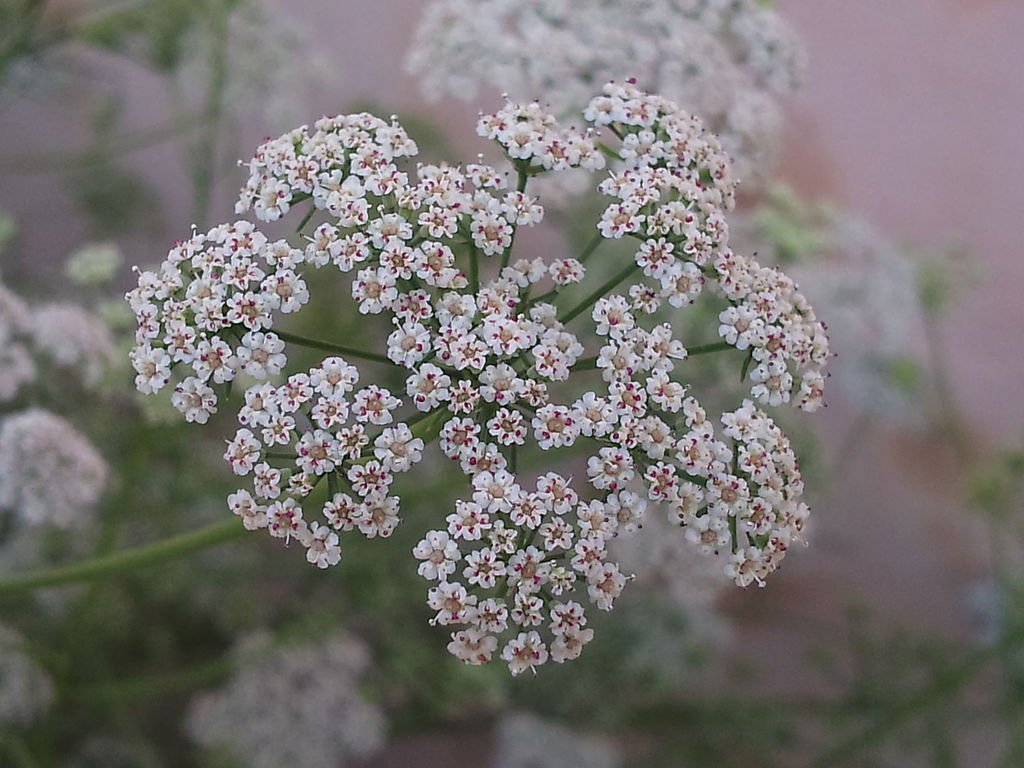 Leaves – The plant when young looks nothing like it does when it begins to flower.  Initially [as will be seen on the video below], the leaves look almost like oregano or mint, but as the plant grows and flowers the upper leaves become closer in appearance to dill or caraway

Basal leaves withered at time of flowering; lowest stem leaves ± 5–14 × 2–6 cm., lamina broadly
oblong or ovate, ± bi- or subtripinnate with 3–5 pairs of pinnae, basal pair sessile or with petiolules up to ± 5 mm.; pinnae rather irregularly divided into narrowly linear, glabrous, rather bluntly mucronate segments up to ± 1.4 cm. long and ± 0.5 mm. wide, with ± revolute margins and not dentate; petioles ± 2.5–8 cm. including the tapering, 8–12 mm., ribbed sheath; upper stem leaves reduced and more shortly petiolate and finally sessile but similar; uppermost leaves also much divided, but small.

Inflorescences -The umbrels have a not dissimilar appearance to related plants such as caraway, and fennel 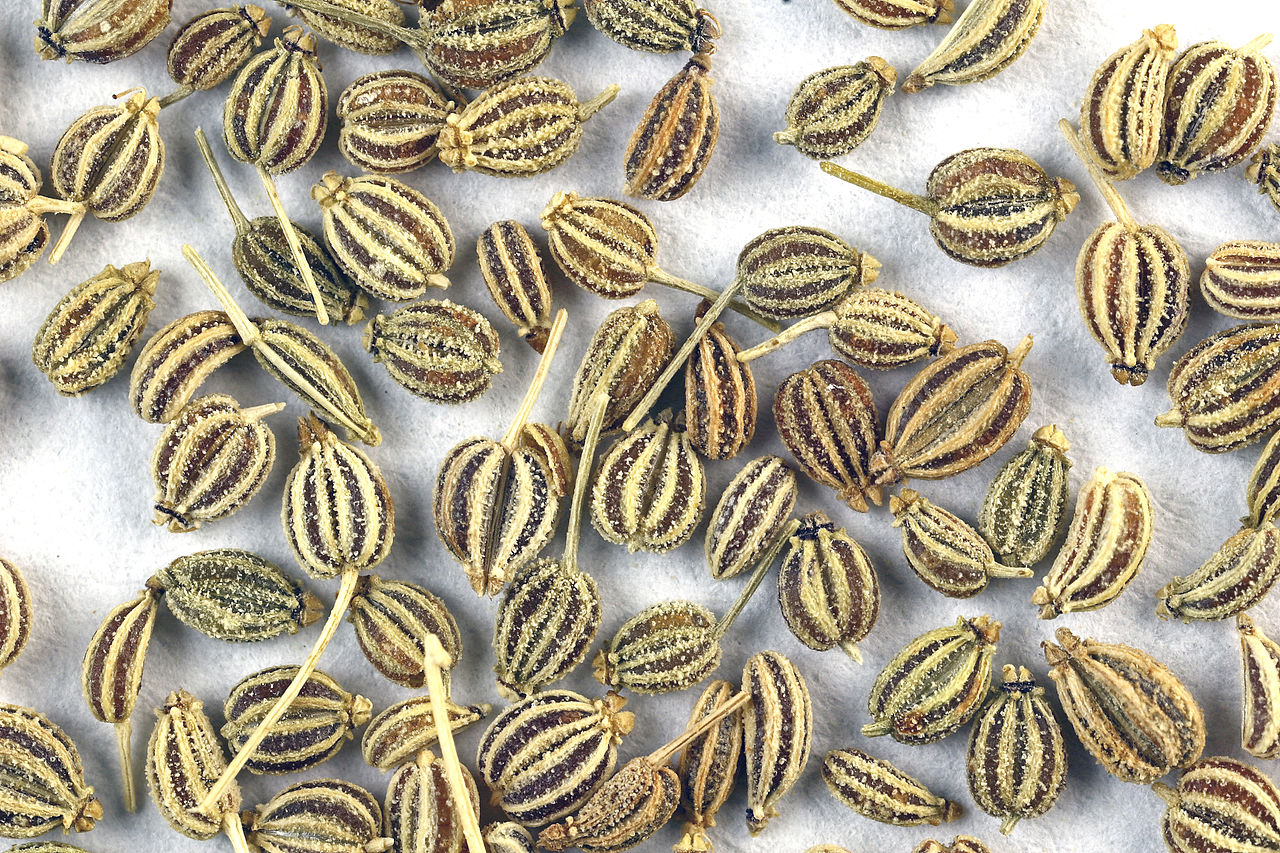 Fruits - Fruit ovate, ± 2–2.5 × 1.75–2 mm., covered with white papillae or at the extreme apex frequently glabrous or almost so and deeply grooved, ribs prominent; stylopodia bluntly conical; styles slender, deflexed or flexuose, subequalling to twice as long as the stylopodia.

Ajwain's small, oval-shaped, seed-like fruits are pale brown schizocarps, which resemble the seeds of other plants in the Apiaceae family such as caraway, cumin and fennel. 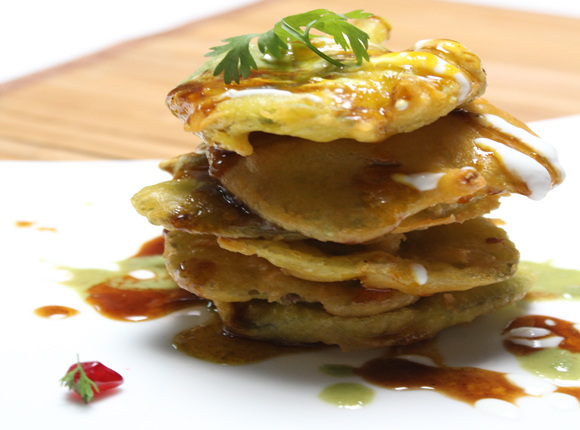 Both the leaves and the seed‑like fruit (often mistakenly called seeds) of the plant are consumed by humans.

Ajwain seeds are used as a spice. They have a bitter and pungent taste, with a flavour similar to anise and oregano. They smell almost exactly like thyme because they contain thymol, but “they are more aromatic and less subtle in taste, as well as being somewhat bitter and pungent”. Even a small number of fruits tends to dominate the flavour of a dish.

They are usually sold whole and then ground in mortar and pestle, or crushed by rubbing between hands or fingertips, when needed. When used whole, for parathas or other breads, for example, the seeds are lightly bruised first, to release oils and increase flavour. In Afghanistan, the fruits are sprinkled over bread and biscuits. 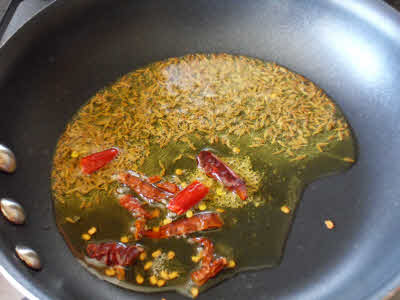 The fruits are commonly dry-roasted or fried in ghee (clarified butter). This allows the spice to develop a more subtle and complex aroma. Cooking ajowan mellows it somewhat.

In Indian cuisine, it is often part of a chaunk, a mixture of spices fried in oil or butter, which is used to flavor lentil dishes.

The seeds can be stored indefinitely if kept from light in airtight containers.

Ajwain has a particular affinity to starchy foods like savoury pastries, breads especially parathas, and potato balls. It is also good with green beans, root vegetables, lentil dishes and recipes using besan (chick pea flour). It is occasionally an ingredient of curry powder.

By Vivek Singh From Saturday Kitchen 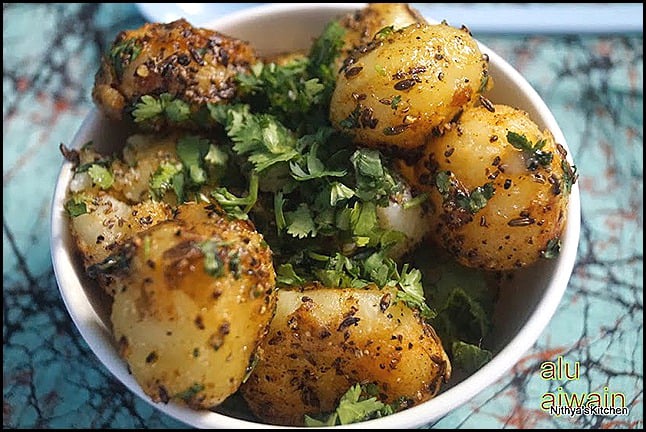 The seeds are sometimes chewed on their own for their medicinal value, tasting bitingly hot and bitter, leaving the tongue numb for a while.

Ajwain seeds contain an essential oil which is about 50% thymol - a strong germicide, anti-spasmodic and fungicide. Thymol is also used in toothpaste and perfumery.

Ayurvedic medicine traditionally uses the seeds for diarrhoea and flatulence, indigestion and colic, and the crushed seeds are used in poultices to relieve asthma and arthritis.   Traditionally it is believed to have “aphrodisiac properties and the Ananga Ranga prescribes it for increasing a husband’s enjoyment in his middle years” [sic].  Ajwan is widely used in Pakistani cuisine and it is also an important ingredient for herbal medicine practiced there.