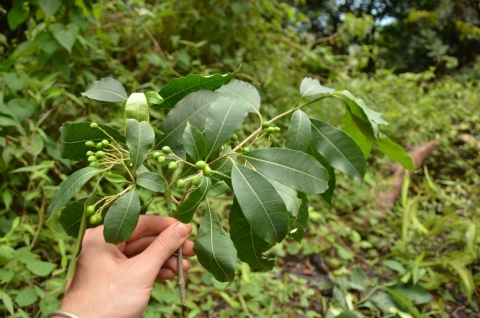 Rauvolfia is a genus of evergreen trees and shrubs, commonly known as devil peppers, in the dogbane family, Apocynaceae.  The genus contains well over 70 species, many of which have similar chemical compositions.  Rauvolfia serpentina, commonly known as Indian Snakeroot or Sarpagandha, for example, and African snakeroot both contain Reserpine in the root. 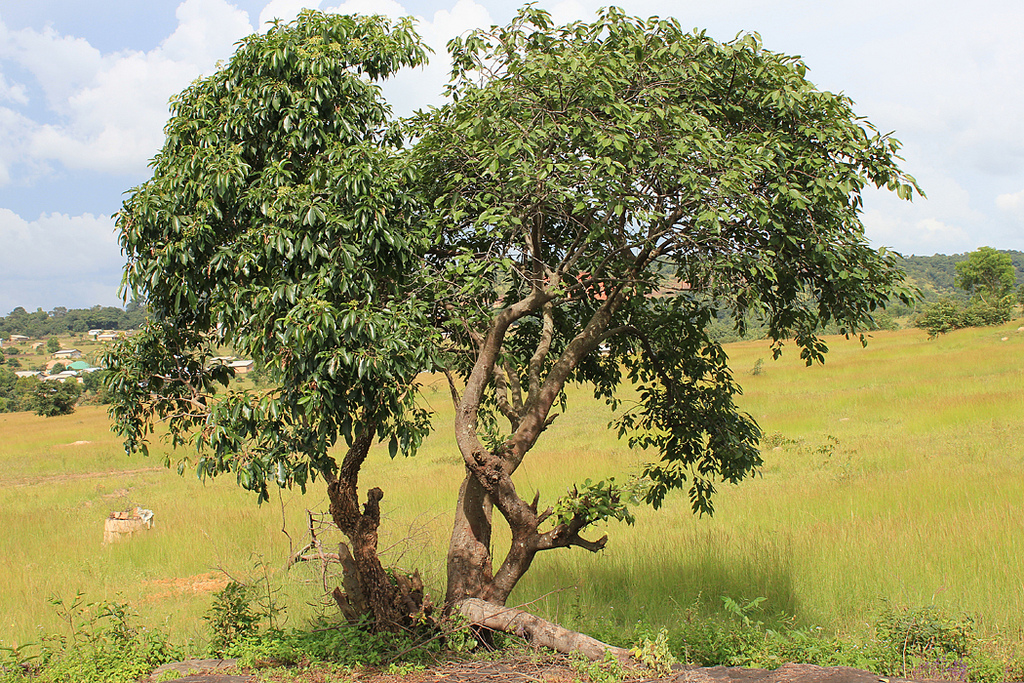 The genus name Rauvolfia commemorates the 16th century German physician and botanist Leonhart Rauwolf, who travelled widely in his search for medicinal plants.  His main claim to fame derives from a trip he made through the Levant and Mesopotamia in 1573-75 in a search for herbal medicine supplies. After he returned, he published a set of new botanical descriptions and a general travel narrative about his visit.

The genus name was established by Carl Linnaeus in his 1753 book Species Plantarum, which states in Botanical Latin that the name is dedicated "to Leonhard Rauwolf": "Leon. Rauvolfio".  Thus although the ‘w’ in his name was replaced by a Classical Latin letter "v" this is the accepted code of nomenclature. 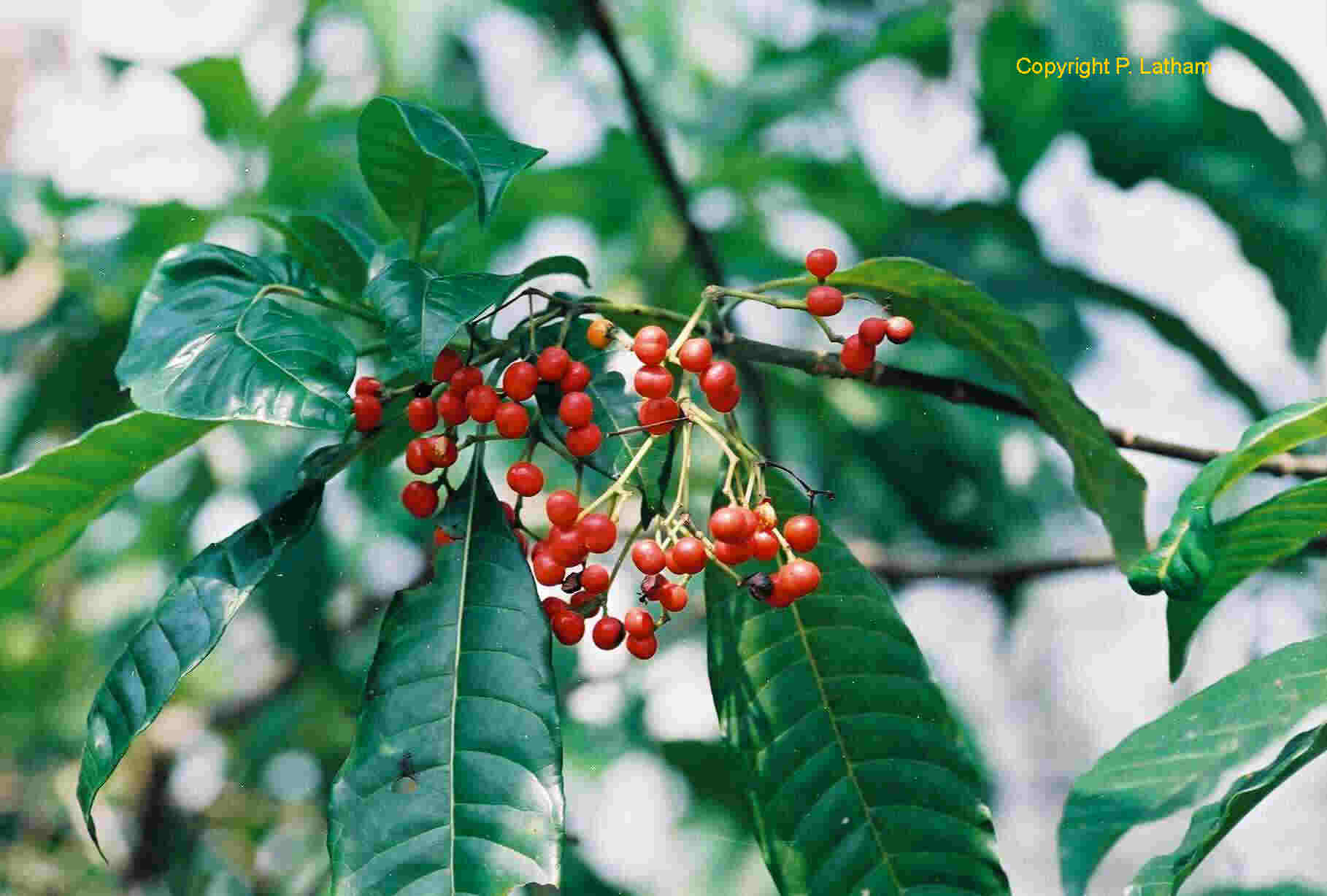 Rauvolfia vomitoria, is native to tropical Africa from Senegal east to Sudan + Tanzania, south to Angola; and naturalized in China, Bangladesh, and Puerto Rico.  It has been identified as an invasive species in Hawai’i (O’ahu).

The genus Rauvolfia can mainly be found in tropical regions of Africa, Asia, Latin America, and various oceanic islands.

Rauvolfia vomitoria is a shrub or small tree up to about 26 foot high [8 metres].  The flowers are small and usually white or greenish white in colour. 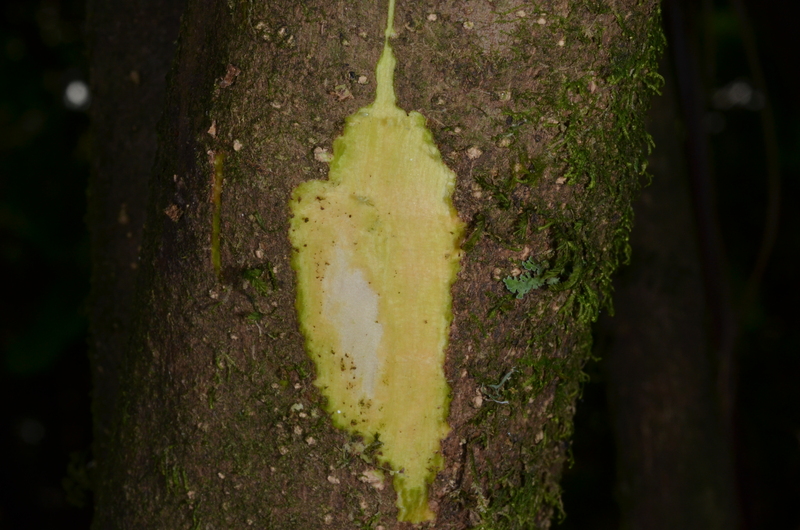 It is recognised in traditional medicine that the plant is essentially poisonous.  However, extractions and concoctions can be used in medicine and the roots, root bark, leaves, and stem bark are the parts used for herbal remedies.  The roots can be harvested without destroying the plant by cutting them 4 inches from the tap root.  Traditional healers use carefully mixed decoctions of the parts of the plant often mixed with other plants, for example:

In other words they use and used the plant to treat the cause of the illness by using it as a targeted anti-bacterial agent, or a purgative for worms and other parasites.

Studies of the plant and its phytochemical constituents has been ongoing from about the mid 1950s.  Schiller and Muller of CIB Pharmaceuticals in Switzerland in 1952 identified that the main alkaloid is Reserpine.  Reserpine was then commercially exploited as a pharmaceutical.  Reserpine (also known by trade names Raudixin, Serpalan, Serpasil) is a drug that is used for the treatment of high blood pressure.

In other words, the uses to which Reserpine were put completely ignored all the traditional uses of the plant and ignored all the safety procedures built in to ensure no ill effects were obtained. The chart below shows the Adverse Drug Reports submitted to the FDA in the USA, the tailing off is due largely to the fact the drug is out of favour because of these effects.

And now we turn to Wikipedia for more detail:

According to eHealthme, in their study of actual patients who take this drug, the most common side effects are:

People in shock being poisoned experience a lowering of the blood pressure.  Shock from poisoning can result in syncope, tinnitus, blurred vision, palpitations and organ failure.  So we can probably conclude that despite the complex language used above, doctors are reducing your blood pressure by poisoning you. 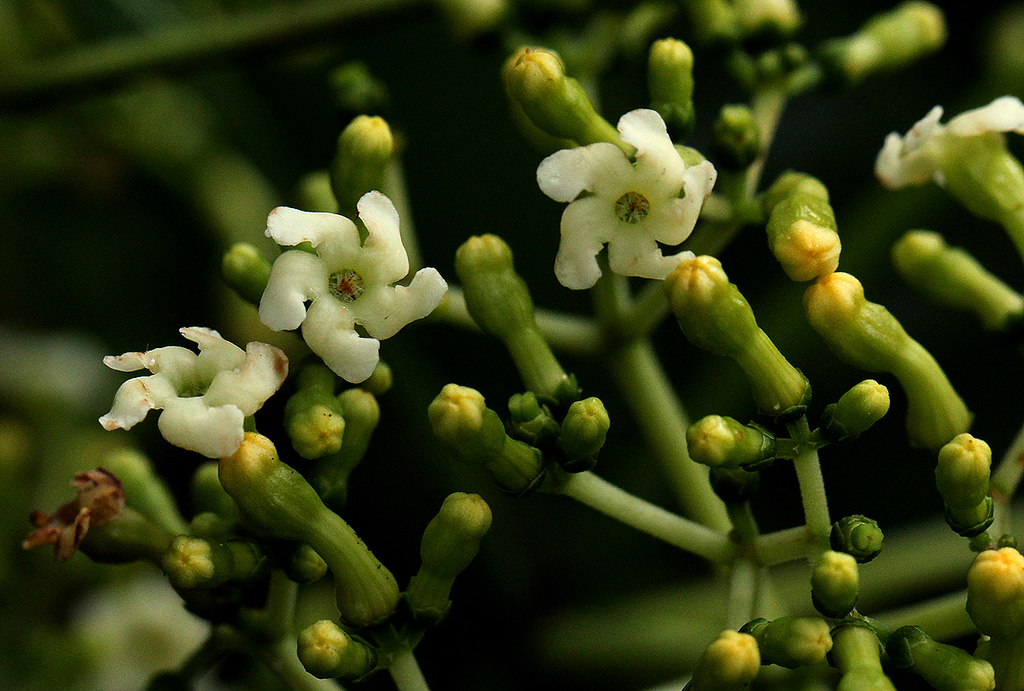 If we now look at Dr Duke’s analysis of the chemical constituents of this plant it should be clear that its medical effects in relation to epilepsy and other psychotic problems are not obtained from Reserpine [which may well exacerbate them], but the combination of chemicals like Yohimbine in the plant; Stigmasterol in the root, which is a sedative and protects the liver; Rescinnamine in the Root: which is an Antihypertensive , Sedative and Tranquilizer.  And so we could continue.

By not understanding the complex interplay between the plant’s chemicals and thinking that one chemical does one thing, chemists have created a drug that actually kills people.  Of the 196 people who had side effects while taking Reserpine, studied by the doctors of the eHealthme team using FDA supplied data, one of them died.

Rauvolfia vomitoria contains a number of chemical compounds with very useful antimalarial, antiplasmodial, antiamebic, antibacterial and anti-fungal properties whose properties appear to be entirely ignored in the analyses, but are well recognised in traditional medicine, for example

Rauvolfia vomitoria is applied to the skin for snake bites, skin infections, and swelling and is placed in the rectum for worms in the intestine in traditional medicine.