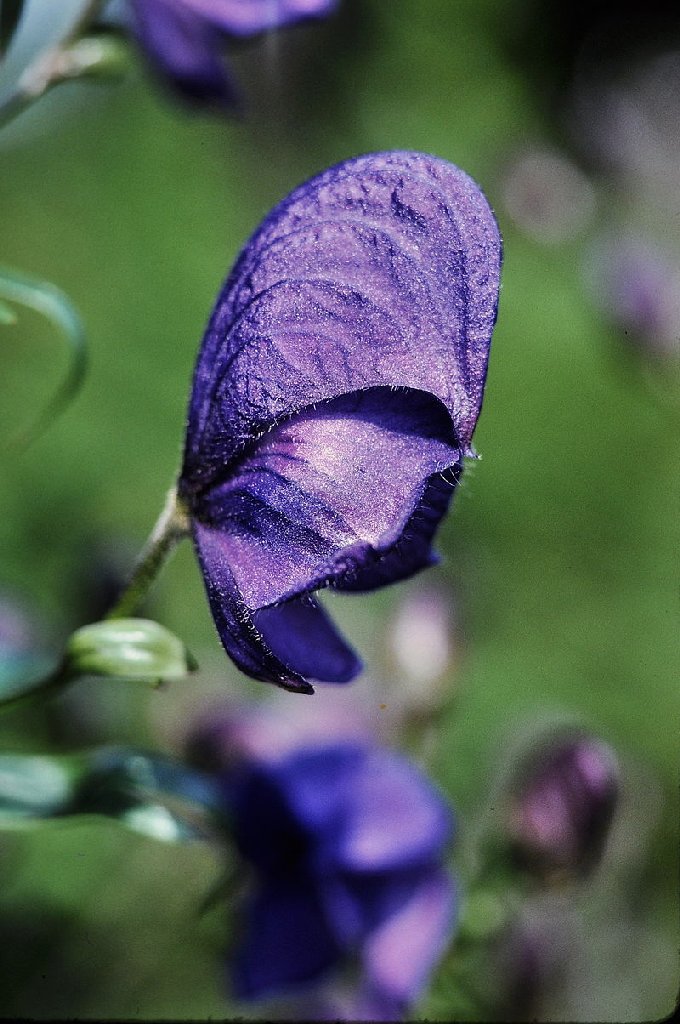 The Aconitum group of plants is a genus of flowering plant belonging to the buttercup family (Ranunculaceae).

These herbaceous perennial plants are chiefly native to the mountainous parts of the northern hemisphere, growing in the moisture-retentive but well-draining soils of mountain meadows.

There are over 250 sub-species of Aconitum.  Varieties include:

The aconitum species contain the Chemical alkaloids Aconitine, Picraconitine and Aconine.  Each plant yields different amounts of the alkaloids, though A Napellus is considered by the pharmaceutical industry to be the most reliable source of Aconitine. 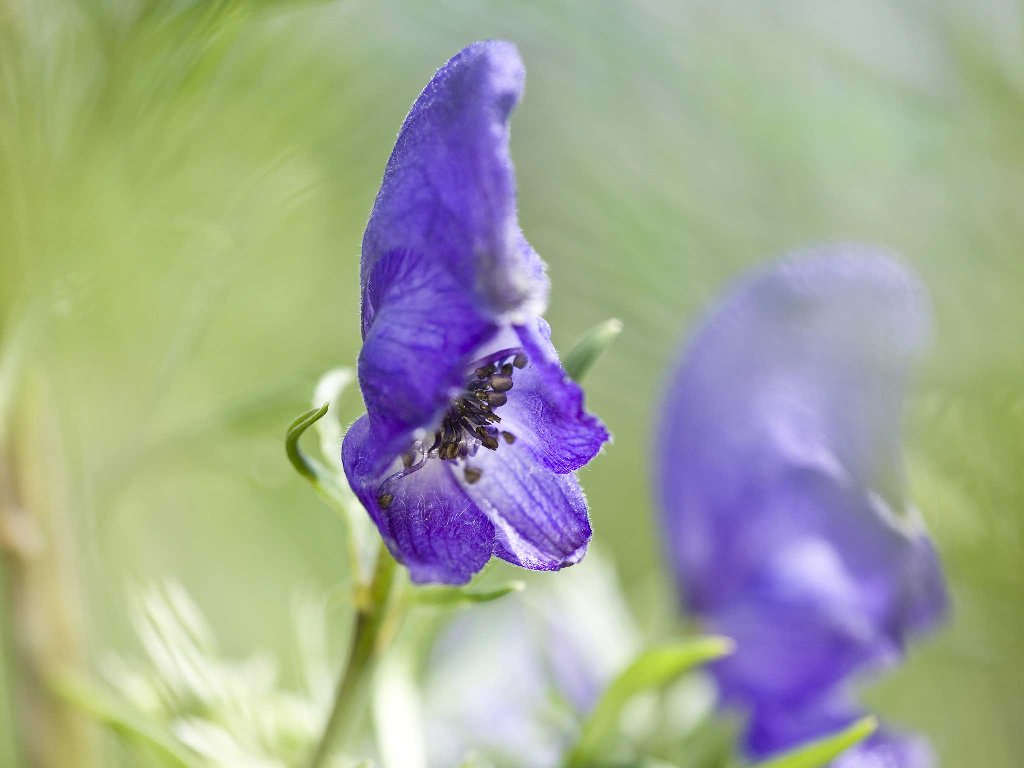 Aconitine is one of the most formidable poisons which have yet been discovered: it exists in all parts of the plant, but especially in the root. The smallest portion of either root or leaves, when first put into the mouth, occasions burning and tingling, and a sense of numbness immediately follows its continuance.

One-fiftieth grain of Aconitine will kill a sparrow in a few seconds; one-tenth grain a rabbit in five minutes.

It is more powerful than prussic acid and acts with tremendous rapidity. One hundredth grain will act locally, so as to produce a well-marked sensation in any part of the body for a whole day. So acrid is the poison, that the juice applied to a wounded finger affects the whole system, not only causing pains in the limbs, but a sense of suffocation and syncope.

Among the symptoms of aconite poisoning are numbing of the mouth and tongue,  muscular weakness and vertigo, a sensation of ants crawling over the body, nausea, vomiting,  pale and clammy skin, staggering, very weak and irregular pulse, laboured breathing, and pain.

Death usually occurs within two to six hours in fatal poisoning; 20 to 40 mL of tincture may prove fatal. 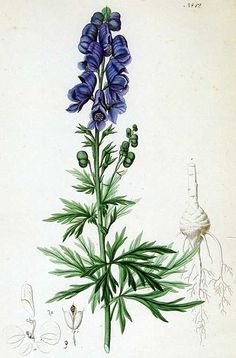 Aconitum napellus  is a hardy perennial, with a fleshy, spindle-shaped root, pale coloured when young, but subsequently acquiring a dark brown skin. The stem is about 3 feet high, with dark green, glossy leaves, deeply divided in palmate manner and flowers in erect clusters of a dark blue colour.

The shape of the flower is specially designed to attract and utilize bee visitors, especially the humble bee. The sepals are purple - purple being especially attractive to bees - and are fancifully shaped, one of them being in the form of a hood. The petals are only represented by the two very curious nectaries within the hood, somewhat in the form of a hammer; the stamens are numerous and lie depressed in a bunch at the mouth of the flower. They are pendulous at first, but rise in succession and place their anthers forward in such a way that a bee visiting the flower for nectar is dusted with the pollen, which he then carries to the next flower he visits and thereby fertilizes the undeveloped fruits, which are in a tuft in the centre of the stamens, each carpel containing a single seed 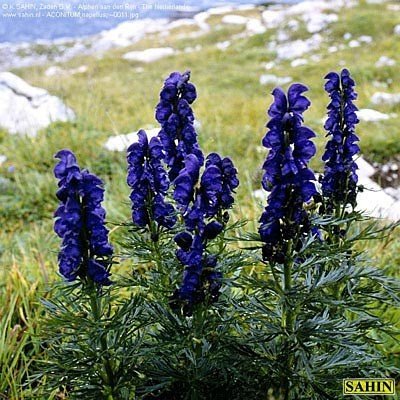 The aconite family of plants has a long history of use as a poison, with cases going back thousands of years.

During the ancient Roman period of European history the plant was often used to eliminate criminals and enemies, and by the end of the period A. napellus was banned  -  any one growing A. napellus could have been legally sentenced to death.

During the war between the Spanish and the Moors in 1483, Arab archers wrapped aconite-soaked cotton around their arrowheads. Nepalese Gurkhas poisoned wells with aconite in the nineteenth century, and during World War II, Nazi scientists created aconitine-treated bullets. Aconites have also been used more recently in murder plots.

The roots of Aconitum ferox supply the Nepalese poison called bikh, bish, or nabee. It contains large quantities of the alkaloid pseudaconitine, which is a deadly poison. Aconitum palmatum yields another of the bikh poisons. The root of Aconitum luridum, of the Himalaya, is said to be as poisonous as that of A. ferox or A. napellus. 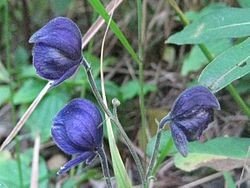 Several species of Aconitum have been used as arrow poisons. The Minaro in Ladakh use A. napellus on their arrows to hunt ibex, while the Ainu in Japan used a species of Aconitum to hunt bear. The Chinese also once used Aconitum poisons both for hunting and for warfare. Aconitum poisons were used by the Aleuts of Alaska's Aleutian Islands for hunting whales. Usually, one man in a kayak armed with a poison-tipped lance would hunt the whale, paralyzing it with the poison and causing it to drown.

Aconite and Belladonna were the main ingredients in some witches' 'Flying ointments.' Aconite causes irregular action of the heart, and Belladonna produces delirium. These combined symptoms produced near death and out of body experiences – and the sensation of 'flying.' 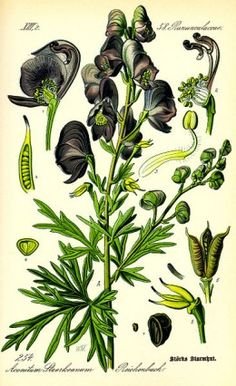 Aconite root contains from 0.3 to 1 per cent alkaloidal matter, consisting of Aconitine - crystalline, acrid and highly toxic - with the alkaloids Benzaconine (Picraconitine) and Aconine.

Aconitine, the only crystallizable alkaloid, is present to the extent of not more than 0.2 per cent, but to it is due the characteristic activity of the root. Aconite acid, starch, etc., are also present.

The Aconitines are a group of highly toxic alkaloids derived from various species of Aconite, and whilst possessing many properties in common are chemically distinguishable according to the source from which they are obtained. The Aconitines are divided into two groups:

And now for the intriguing part.

The leaves, stem, flowering tops and roots of Aconitum Napellus are used by the pharmaceutical industry to produce Extract of Aconitum.  Both tincture and liniment of Aconite are in general use.  As an ointment it has been used to treat neuralgia, lumbago and rheumatism.  It is also used to treat flu, pneumonia, pleurisy and cardiac failure.

Furthermore, Aconite has long been used in traditional Chinese medicine and Ayurveda (Hindu traditional medicine). Aconite was also described in Greek and Roman medicine by Theophrastus, Dioscorides, and Pliny the Elder.

But, the dose is absolutely key to its success, it is thus administered only  in homeopathic doses. 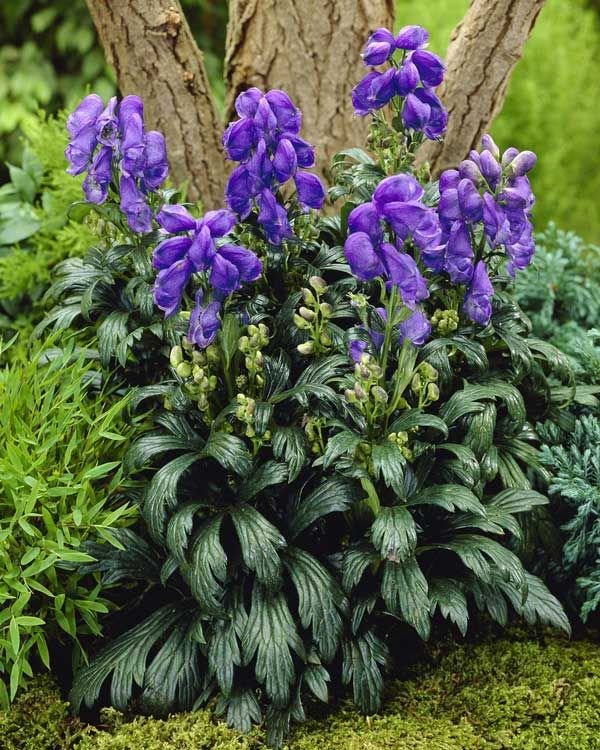 You will see from the observations that this plant produces a mixture of healing effects and hallucinations, out of body effects and near death experiences.

Aconitine has absolutely no psychedelic properties at all.  Unless you take just enough to cause delirium from which hallucinations may well ensue for the five or ten minutes before you die, Aconitine is not a drug to give you spiritual experiences.

But, the official tincture taken internally – thus in minute doses – diminishes the rate and force of the pulse. It will also do the same thing in ointments and liniments and it is possible that liniments and ointments provide a more effective way of reducing the exposure to the drug.  In effect the use of an ointment reduces the dose.

A large number of the psychoactive and hallucinogenic compounds have the effect of increasing the blood pressure, whereas aconite clearly lowers it, in very small doses.  Thus in a witch’s ointment  where true psychedelics are used, a trace of aconite might have a balancing effect.  We have no idea how much and I know there are better ways of achieving the lowering of the heart rate than something this lethal, but it does explain why it was used in witch’s ointments – it has no psychoactive effect, but it stopped you having a heart attack when you did use the psychoactive compounds.

There is another interesting little snippet.  Gastrointestinal decontamination in modern medicine is achieved with activated charcoal and many witches' ointments contained soot.  The major physiological antidote is atropine, which is used to treat bradycardia and atropine occurs in the other ingredients of the ointments, so these ointments are extremely intriguing and show an understanding of chemistry which is rather uncanny.