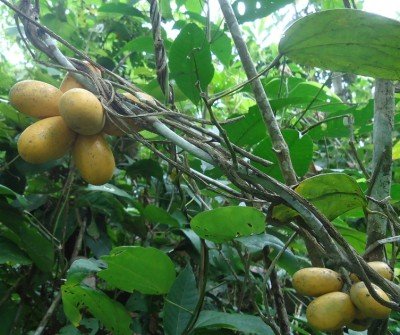 Abuta is a genus in the flowering plant family Menispermaceae, of about 32 species, native to tropical Central and South America and usually found in the tropical rain forest.

Abuta is one of the components of the arrow poison curare of some indigenous tribes of South America (especially Abuta imene from Colombia), as such one can see that this family of plants needs to be treated with some respect.

The  roots of Abuta rufescens are used as a medicine in diseases of the urogenital tract, but according to Wikipedia “it is dangerous.”  In contrast Abuta grandiflora has been used medicinally for some time and extracts are sold, principally of the bark.  In effect you have to know which specific plant to use.

Where scientific research interest is currently centred, however, is in the anti-parasitic and anti-malarial activity of the plants.

There is also a specific film about one species Abuta roja * Paullinia bracteosa.