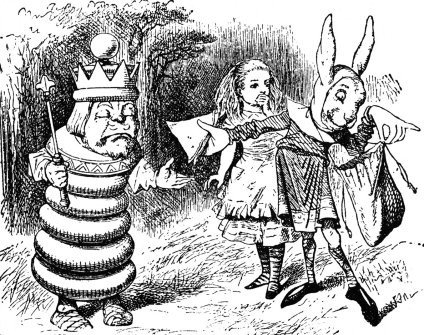 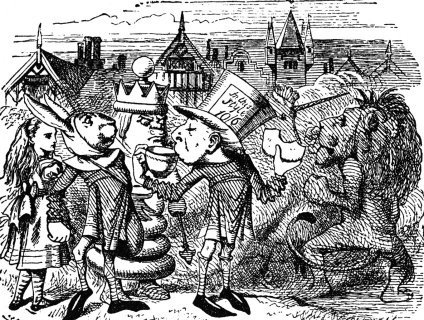 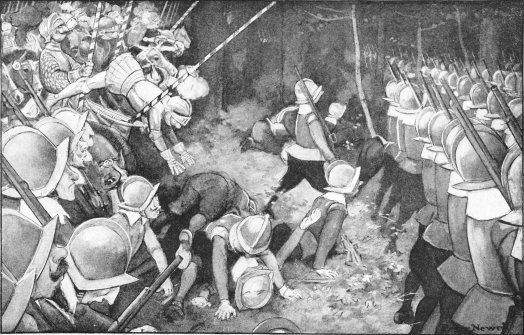 CHAPTER VII. The Lion and the Unicorn

The next moment soldiers came running through the wood, at first in twos and threes, then ten or twenty together, and at last in such crowds that they seemed to fill the whole forest. Alice got behind a tree, for fear of being run over, and watched them go by.

She thought that in all her life she had never seen soldiers so uncertain on their feet: they were always tripping over something or other, and whenever one went down, several more always fell over him, so that the ground was soon covered with little heaps of men.

Then came the horses. Having four feet, these managed rather better than the foot-soldiers: but even THEY stumbled now and then; and it seemed to be a regular rule that, whenever a horse stumbled the rider fell off instantly. The confusion got worse every moment, and Alice was very glad to get out of the wood into an open place, where she found the White King seated on the ground, busily writing in his  memorandum-book.

'I've sent them all!' the King cried in a tone of delight, on seeing Alice. 'Did you happen to meet any soldiers, my dear, as you came through the wood?'

'Yes, I did,' said Alice: 'several thousand, I should think.'

'Four thousand two hundred and seven, that's the exact number,' the King said, referring to his book. 'I couldn't send all the horses, you know, because two of them are wanted in the game. And I haven't sent the two Messengers, either. They're both gone to the town. Just look along the road, and tell me if you can see either of them.'

'I see nobody on the road,' said Alice.

'I only wish I had such eyes,' the King remarked in a fretful tone.

'To be able to see Nobody! And at that distance, too! Why, it's as much as I can do to see real people, by this light!'

All this was lost on Alice, who was still looking intently along the road, shading her eyes with one hand. 'I see somebody now!' she exclaimed at last. 'But he's coming very slowly--and what curious attitudes he goes into!' (For the messenger kept skipping up and down, and wriggling like an eel, as he came along, with his great hands spread out like fans on each side.)

'Not at all,' said the King. 'He's an Anglo-Saxon Messenger--and those are Anglo-Saxon attitudes. He only does them when he's happy. His name is Haigha.' (He pronounced it so as to rhyme with 'mayor.')

'I love my love with an H,' Alice couldn't help beginning, 'because he is Happy. I hate him with an H, because he is Hideous. I fed him with--with--with Ham-sandwiches and Hay. His name is Haigha, and he lives--'

'He lives on the Hill,' the King remarked simply, without the least idea that he was joining in the game, while Alice was still hesitating for the name of a town beginning with H. 'The other Messenger's called Hatta. I must have TWO, you know--to come and go. One to come, and one to go.'

'I beg your pardon?' said Alice.

'It isn't respectable to beg,' said the King.

'I only meant that I didn't understand,' said Alice. 'Why one to come and one to go?'

'Didn't I tell you?' the King repeated impatiently. 'I must have Two--to fetch and carry. One to fetch, and one to carry.'

At this moment the Messenger arrived: he was far too much out of breath to say a word, and could only wave his hands about, and make the most fearful faces at the poor King.

'This young lady loves you with an H,' the King said, introducing Alice in the hope of turning off the Messenger's attention from himself--but it was no use--the Anglo-Saxon attitudes only got more extraordinary every moment, while the great eyes rolled wildly from side to side.

'You alarm me!' said the King. 'I feel faint--Give me a ham sandwich!'

On which the Messenger, to Alice's great amusement, opened a bag that hung round his neck, and handed a sandwich to the King, who devoured it greedily.

'Another sandwich!' said the King.

'There's nothing but hay left now,' the Messenger said, peeping into the bag.

'Hay, then,' the King murmured in a faint whisper.

Alice was glad to see that it revived him a good deal. 'There's nothing like eating hay when you're faint,' he remarked to her, as he munched away.

'I should think throwing cold water over you would be better,' Alice suggested: 'or some sal-volatile.'

'Who did you pass on the road?' the King went on, holding out his hand to the Messenger for some more hay.

'Nobody,' said the Messenger.

'Quite right,' said the King: 'this young lady saw him too. So of course Nobody walks slower than you.'

'I do my best,' the Messenger said in a sulky tone. 'I'm sure nobody walks much faster than I do!'

'He can't do that,' said the King, 'or else he'd have been here first.