Fifth Revelation: Marie-Victoire helps in the composition of the table, “The Heavens declare.”

This is the most important revelation of all (see Table 3). It confirms Saint-Yves’ original arrangement of the cosmic elements (planets and signs of the zodiac) with the Hebrew alphabet, as arrived at in the Third Revelation.

The confirmation consists in the numbers which result from adding up those of the signs, in two groups of six, and the planets. Saint-Yves uses kabbalistic means to reduce these numbers and to find in them archetypal words. For example, the sum of the twelve signs of the zodiac, 565, becomes 5, 6, 5, corresponding to the letters He, Vau, He. These make the name of Eve, and with the addition of Yod, that of Yahweh. The sum of the seven planets’ numbers, 469, gives the Sanskrit word De-va-ta, or “God.”

Finally, by a procedure that some would class as mere juggling, Saint-Yves succeeds in extracting the name of Jesus (Ye, Sh, V): a discovery which moved him profoundly, as he relates in the long commentary below, to which I have applied the title “The Word.”

The emphasis of this revelation of the Word which created all things in six days is the key not only to the integration of colors and tones into the Archeometer, but also to the philosophy behind it: a philosophy that is at once religious, moral, and historical. Anticipated in Saint-Yves’ Missions and sketched out in this unfinished commentary, it finds its fullest expression in the essay “La Sagesse vraie” which prefaces L’Archéomètre. 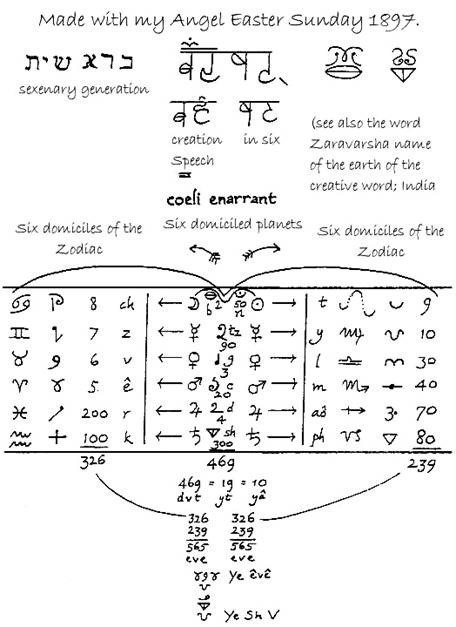 Saint-Yves drew the table which he entitled “Coeli enarrant” (The heavens declare) twice in his Hermetic notebook. He followed the first version with a Sanskrit alphabet, ecstatic exclamations such as “Glory! Glorify him! Sing, whirl!,” and an equally ecstatic poem, “Glory! Glorify IEVE, Angels and Gods!” Then he constructed a circle of the zodiac and its Vattanian letters on which he tried to distribute the musical tones—seven diatonic and twelve chromatic—and the seven colors of the rainbow. But he was not yet contented with the result.

The second version of the table bears the rubric: “Made with my Angel, Easter Sunday 1897.” What was new here were the numbers and letters beneath the table, in which, as Saint-Yves described in his commentary, he saw emerging the sacred name of the Word. The discovery of the name of Jesus encoded, as it were, in the heavens themselves confirmed the words of the Psalmist: “The heavens declare the glory of God, and the firmament shows his handiwork” (Ps. 19.1). It gave him the impulse to write the extraordinary commentary in which one can see Saint-Yves in his philosophic workshop, both oratory and laboratory, writing at top speed with the red ink that he reserved for his most important (though also most illegible) notes. Without any care for literary style, the author’s mind ranges around his discovery in ever-widening circles. After explaining the kabbalistic derivations, he throws himself into history—the polemical history that he had published in Mission des Juifs—with the added dimension of the “Brahmin universities” unveiled in Mission de l’Inde.

This version of history is marked by Saint-Yves’ disapproval of the way the Jews abnegated the principles given them by Moses, and by his hatred of the Romans. These two peoples he reckoned enemies of the ancient Synarchy propagated by Moses and known to previous civilizations, whose key and essential symbols he believed himself to have rediscovered.

The commentary then addresses music. No subject gave Saint-Yves more trouble than speculative music: over the succeeding years he filled hundreds of pages with notes, mostly on the problems of finding a tuning of the scale that would agree with the sacred numbers. The culmination of this quest is the musical “ruler” in L’Archéomètre (page 263) for which he even took out a patent, intending it to be used by artists, designers, and architects to make their work properly archeometric. It bears all the diatonic, chromatic, and enharmonic tones, assigned their tuning-numbers within the framework of the apocalyptic number 144,000, which may actually have been the result of a further (seventh) revelation—the last of which I have found any mention—on November 1, 1901. But at this point, in 1897, Saint-Yves was limited to making the planets correspond with the tones of the diatonic scale. He took as his basis the same system as Fabre d’Olivet had used, generally attributed to the Egyptians on the authority of Dio Cassius:

In the notes following the essay “The Word,” Saint-Yves took the crucial decision that was the natural reflection of the Six Days’ creation: he substituted the hexad for the heptad. In returning to his work on the correspondences of tones and colors with the zodiacal circle, he worked henceforth with six, instead of with seven. He abandoned the rainbow, to which Newton had attributed seven colors, for the six primary and secondary colors of the painters. For the same reason, he extracted the tone E of the Sun from the scale and replaced it at the center of his Archeometer, leaving twice six tones on the circle. Always practical, Saint-Yves tested them on his Bechstein piano and his harmonium, and, as one discovers in another series of notes, constructed colored circles which he spun on a top, while assimilating these experiments to reflections on the sexual act: a fine example of the universality of his thought.

Now the majority of elements of the Archeometer were assembled, without yet being united in a single diagram. They were the following:

2. The planets, placed according to their rulerships

3. The twelve Hebrew/Vattanian letters corresponding to the signs of the zodiac

4. The seven letters corresponding to the planets

5. The numbers corresponding to these nineteen letters

7. The six colors arranged in a six-pointed star. 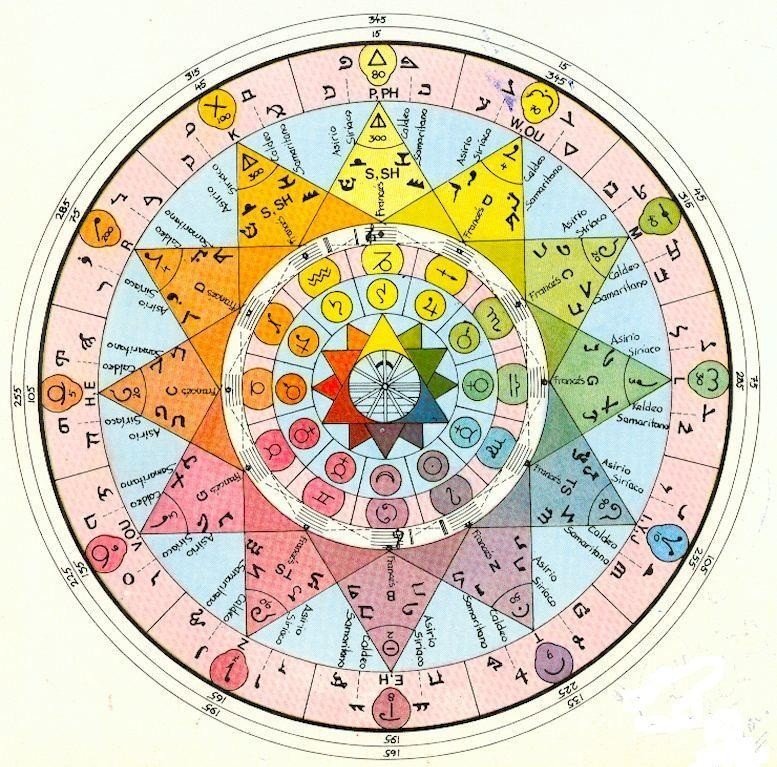 Hebrew alphabet, the
Map of the Egg
Planets, the
Rainbow
Signs of the Zodiac