The Hebrew alphabet (Hebrew: אָלֶף־בֵּית עִבְרִי[a], alefbet ʿIvri ), is today used in the writing of the Hebrew language. It has now, and also had in the past, 22 letters.  There have been two script forms in use; the original old Hebrew script is known as the paleo-Hebrew script (which has been largely preserved, in an altered form, in the Samaritan script), while the present "square" form of the Hebrew alphabet is a stylized form of the Aramaic script. Various "styles" (in current terms, "fonts") of representation of the letters exist.

Although Hebrew is read and written from right to left, the following table shows the present letters in order from left to right.

All the symbolism and meaning can be found in the old script, not the new.

The shape of the letters

The shape of the letters were used in the Mysteries, and were a reminder of the various positions one had to adopt during the initiation ceremonies - kneeling, prostrate, etc.   An example includes LAM.  There is also Bet:

The second letter forms a fairly passable diagram of its symbol - the level- also used in Masonry.  This conveys the emblematic meaning of "prostration and concentration".

Zayin is the seventh letter of many Semitic abjads, including Phoenician, Aramaic, Hebrew ז, Syriac ܙ and Perso-Arabic alphabet ز .   "The Phoenician letter appears to be named after a sword or other weapon. In Biblical Hebrew, zayin (זין) means "sword", and the verb lezayen (לזיין) means "to arm". In modern Hebrew, zayin (זין) means "penis", which is spot on - see the symbolism for sword.

Numbers were once attached to each level.  These have largely lost their meaning, as they were once an indication of the proportional distances between each level and layer.  One assumes there is also a connection with the Book of Numbers.

In connection with numbers, there  is also the association between the actual numbers of letters in the alphabet and various significant symbolic meanings, some of which relate to stages on the spiritual path, some the various levels and layers themselves and some to the order of creation :

10 = One plus Two plus Three plus Four

This may be wrong - sources appear to disagree, all help gratefully received

If we take the elements then the letters and their meanings are as follows:

Note that in many texts there is an 'upper' Heh = Earth,  and a 'lower' Heh which appears to be equivalent to the Underworld [there is no mention of Hell although lower Heh could be both combined].

The Tree of Life and as a consequence the Intelligence hierarchy.

Yodh (also spelled Yud, Yod, Jod, or Jodh) is the tenth letter of many Semitic alphabets, including Phoenician, Aramaic, Hebrew Yud י, Syriac ܝ and Arabic Yāʾ ي (in abjadi order, 28th in modern order). When used in some of the Tarot cards its meaning appears to have been corrupted somewhat to mean 'soul', but as far as I can ascertain this is incorrect.  Yodh is the Higher spirit.  By extension it also represents annihilation.  In gematria, Yud represents the number ten. 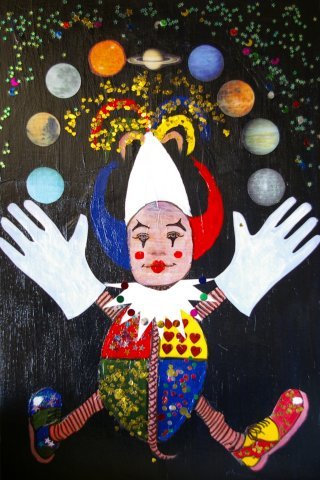 Appears to mean Crown.  The symbol of enlightenment.  There is a link here with the symbol of the jester with the three pronged hat or the twin horns.  Three prongs means enlightenment which provides access to the symbolic Sun and Moon as well as the Stars.  The three columns in the Sephirot.  The following however is fascinating

The limitations of our life under the rule of the visible Torah show that something is missing in it which will be made good only in another state of being. In the view of these Kabbalists the faulty letter of the Torah is the consonant shin, which we write with three prongs, but which in its complete form should have four.

They found an indication of this in the Talmudic prescription that both forms of the letter shin should be engraved in the leather capsule that is fastened to the head in the ritual of putting on the phylacteries, or tefillin.

In the other view, which is far more radical, a letter is actually lacking in our alphabet; in our aeon this letter is not manifested and hence does not occur in our Torah. The implications of this view are obvious.

The original divine alphabet and hence the complete Torah contained 23, letters, one of which has become invisible to us and will again be made manifest only in the next shemittah.   It is only because this letter is missing that we now read positive and negative ordinances in the Torah.

Every negative aspect is connected with this missing letter of the original alphabet.

The meaning of Aleph appears to depend on which source text was used.  Given that all this symbolism derives from ancient Egypt and earlier cultures, it has understandably suffered in translation.  The symbol of the swastika is related to the symbol Aleph.  Part of the symbol for the Set square is also incorporated into the symbol.

There appears to be a connection here with the first stages of enlghtenment and the controlled kundalini experience.  By extension it can thus aslo represent the Aether level in general.

Tet is similar in symbolic meaning to the Chalice or cup, in effect it symbolises the receipt of spirit input via the Higher spirit.  Its shape is indicative of its meaning.