Marie Euphrosyne Spartali, later Stillman (10 March 1844 – 6 March 1927), was a British Pre-Raphaelite painter of Greek descent. During a sixty-year career she produced over one hundred works, contributing regularly to exhibitions in Great Britain and the United States.

Spartali studied under Ford Madox Brown for several years from 1864, with his children Lucy, Catherine and Oliver. Rossetti, on hearing that she was to become a pupil to Madox Brown, wrote to him (on 24 April 1864), "I just hear Miss Spartali is to be your pupil. I hear too that she is one and the same with a marvellous beauty of whom I have heard much talk." She first sat for him in 1867.  She is the model for  A Vision of Fiammetta, Dante's Dream, and The Bower Meadow.

In 1871, against her parents' wishes, she married American journalist and painter William J. Stillman. She was his second wife, his first having committed suicide two years before. The couple posed for Rossetti in his famous Dante pictures. He first worked for the American Art Magazine, The Crayon. His later job was a foreign correspondent for The Times. His job as a foreign correspondent resulted in the couple dividing their time between London and Florence from 1878 to 1883, and then Rome from 1889 to 1896. She also travelled to America, and was the only Britain-based Pre-Raphaelite artist to work in the United States.  She had three children and died in March 1927

Gloom-girt 'mid Spring-flushed apple-growth she stands;
And as she sways the branches with her hands,
Along her arm the sundered bloom falls sheer,
In separate petals shed, each like a tear;
While from the quivering bough the bird expands
His wings. And lo! thy spirit understands
Life shaken and shower'd and flown, and Death drawn near.

All stirs with change. Her garments beat the air:
The angel circling round her aureole
Shimmers in flight against the tree's grey bole:
While she, with reassuring eyes most fair,
A presage and a promise stands; as 'twere

On Death's dark storm the rainbow of the Soul. 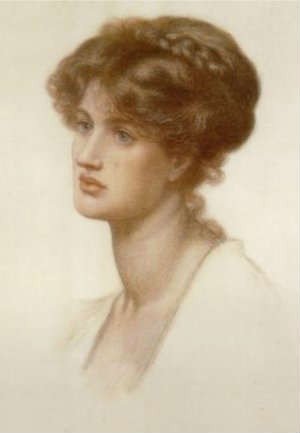 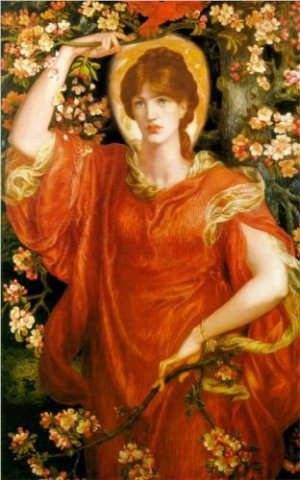 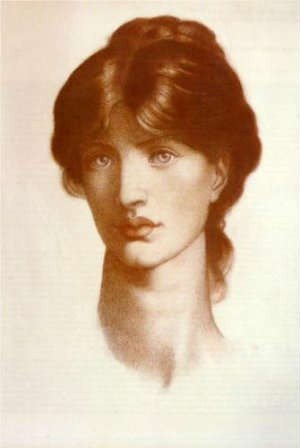