In Sumerian mythology, Ninhursag was a mother goddess of the mountains, and one of the great deities of Sumer. The Earth Mother.  She is principally a fertility goddess. Temple hymn sources identify her as the 'true and great lady of heaven' and kings of Sumer were 'nourished by Ninhursag's milk'. Her hair is sometimes depicted in an omega shape, and she at times wears a horned head-dress and tiered skirt, often with bow cases at her shoulders, and not infrequently carries a mace or baton surmounted by an omega motif or a derivation, sometimes accompanied by a lion cub on a leash. She is the tutelary deity to several Sumerian leaders.

See below for the meaning of all this symbolism. 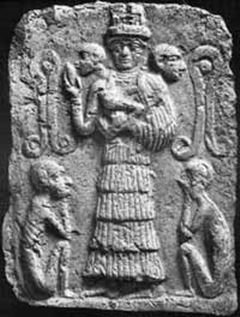