Paintings of Krishna contain a wealth of symbolic meaning.  Although they depict a part of a myth or story they are intended to be used to teach symbolism.  We have extracted some of the main symbols in this picture so that they can be looked up and decoded.

The blue skin of Krishna also has a symbolic meaning. 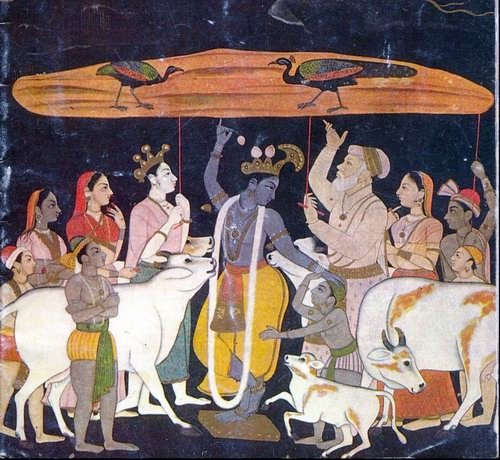 Krishna is often depicted wearing a silk golden yellow dhoti, and a peacock feather crown. Common depictions show him as a little boy, or as a young man in a characteristically relaxed pose, playing the flute. In this form, he usually stands with one leg bent in front of the other in the Tribhanga posture, accompanied by cows, emphasising his position as the divine herdsman, Govinda, or with the gopis (milkmaids).

(O janamejaya!) When the sacrifice was stopped, the lord of gods (indra) became angry. He ordered the water bearing clouds named samvartaka.

Clouds, powerful as elephants! Hear my words. If you are loyal to me and if you wish to please me, then do as I say.

The gopas such as nandagopa residing in vR^indAvana condemn my festival, depending on dAmodara (kR^iShNa).

By showering rain for seven days, torture the cows, who are the livelihood for the people there.

Riding on the back of airAvata, I will personally go there to oversee this terrible rain accompanied by thunder, lightning and strong winds.

When you begin thundershowers accompanied by strong winds, the cows and the people of vraja will be distressed and forced to give up their lives.

The powerful indra (pAkashAsana), with his sacrifice stopped by kR^iShNa, thus ordered all the rain bearing clouds.

Then the terrible, dark coloured, water bearing clouds resembling mountains began to thunder as they covered the sky.

The rain bearing clouds, decorated with rainbows and accompanied by lightning covered the sky. The sky became dark.

The clouds covered the entire sky like a group of thousands of elephants, touching each other's bodies, creating a long bad day.

The clouds started raining all over showering water streams looking like hands of men, trunks of elephants and bamboo stems.

The eyes of men considered the deep, unlimited and incomprehensible clouds as a grave situation as if the ocean has taken over the sky.

The birds stopped flying and the animals ran here and there. Clouds like mountains began to rumble all over in the sky.

Those terrible clouds covering the entire sky made sun and moon disappear. By showering rain continuously, the earth was deformed.

Due to the group of dark clouds, there was no light. Planets and stars were not visible. Without the rays of sun and moon, the sky became dark.

The water released from the clouds continuously spread everywhere and the earth appeared to be filled with water.

The peacocks crowed loudly. The other birds became silent. The rivers overflowed and the trees were swept in the currents.

Due to the thundering of clouds and the roaring of the rain, the grass and the trees began to tremble.

The terrified gopas started saying, "The time of destruction has come. The earth has become engulfed in the sea".

Due to the incessant rain, the cows were terrified. They bellowed and stood still as though they have become statues.

Without moving their legs, toes and face, they stood still. The hair on their wet bodies were erect. Their stomach and breasts became thin.

Being unable to bear the stress, some cows gave up their lives. Some of them became ill and fell down. Due to the rain, some cows fell down with the calves.

Some cows kept the calves under their bodies. Some were separated from calves. Many became inactive without food, their stomachs becoming thin.

Unable to bear the rain, the cows bellowed and fell down.

The calves raised their heads turning towards dAmodara(kR^iShNa)'s face as though appealing to kR^iShNa, "Please save us".

Observing the bad day (with the sky covered with dark clouds), the suffering and death of cows and the impending doom of gopa-s, kR^iShNa became very angry.

Thinking for a while and coming to a suitable solution, kR^iShNa who speaks dear words, said to himself:

I will now lift the hill along with the trees and forest, creating a place to save the cows from the terrible rain.

The hill, lifted by me, similar to a house built on earth, will save the cows along with vraja and will be under my control.

Thinking like this, the true valiant kR^iShNa, to show the strength of his arms, lifted the nearby hill. As he lifted the hill with his arm, kR^iShNa appeared like another hill.

The hill surrounded by clouds, lifted up by kR^iShNa with his left hand appeared like a house there.

On the peaks of the hill, which was lifted up from earth, rocks were dislocated and trees were uprooted.

That hill having shaking tall peaks with falling trees shook completely and appeared like a bird flying in the sky.

Then the hill shook once, with streams running along the sides merging with the surrounding clouds and rocks rolling down.

With the streams merging with the dark blue clouds around the peaks, the hill looked like a peacock spreading its feathers.

All the vidyAdhara-s, nAgA-s, gandharvA-s and apsara-s said that the hill appeared as if it was about to fly with wings.

Resting on the hand (of kR^iShNa), being uprooted and separated from the surface of earth, the hill revealed gold, a~njana, silver and other minerals.

Some peaks of the hill were broken. Some other peaks were cracked. Some were covered by clouds.

Due to the shaking of the hill, variety of flowers from the shaking branches of trees showered down and spread on the ground.

With bodies decorated by half svastika marks, many angry serpents, coming out from their holes, flew in the sky with their large hoods.

Flocks of birds which flew high in the sky and fell down again and again, distressed and terrified by rain and fear.

The lions became angry and roared loudly like rain bearing clouds. The tigers growled resembling the sound of churning pots.

The uneven portions of the hill became even and the even portions became highly uneven. Thus, with deformed surface, it appeared like a completely different hill.

The shape of the hill, with clouds showering incessant rain, became similar to that of tripura, immobilized by rudra (shiva) in the sky.

The huge hill, carried by kR^iShNa on his hand, dazzled like an umbrella, covered by dark blue clouds.

Closing the mouths of caves, with rain clouds, the hill appeared to be sleeping, using kR^iShNa's hand as a pillow.

The forests, trees and peaks of the hill appeared as though suffering from fever with the shaking and crumbling peaks.

The rain clouds, carried by winds showered incessant rain on the hill, prompted by the great indra.

The hill situated on the hand of kR^iShNa surrounded by rain clouds, appeared like a country, tormented by enemy kings.

Keeping the hill on his hand and smiling, kR^iShNa, the protector and supporter of gopa-s, like prajApati, spoke as follows:

Gopa-s! By my divine power, impossible even by the gods, I have made the hill, a house, for you and the cows. Wind can not enter this shelter.

Bring all the cows here quickly for rest. Let them stay here comfortably, without being disturbed by winds.

You can share this place. I have avoided the rain. By lifting the hill, I have made a large area, suitable for you to live.

The length of this large place is five krosha-s and the breadth is one krosha. When I am able to protect all the three worlds, what is the protection of vraja for me?

As the gopa-s came under the hill, there was a lot of noise, with the bellowing of cows and the rumbling of clouds.

Then the cows, divided into groups by gopa-s, entered the deep and large belly of the hill.

kR^iShNa stood still under the hill like a pillar, carrying the hill on his hand as a dear guest.

Then all the vraja, afraid of the rain, entered the house made by lifting the hill, along with their utensils and carts.

Indra, holder of vajra, saw the task, impossible even for the gods, performed by kR^iShNa. Defeated in his attempt, the lord removed the rain clouds.

After seven days, with his festival not performed on earth, the killer of vR^itra (indra), along with the clouds, returned to the best heaven.

After seven days were over, when the efforts of the performer of hundred sacrifices (indra) became futile, the sky became clear, devoid of the clouds and the sun began to shine in the day.

The cows returned through the same way easily. The vraja returned to the own location.

kR^iShNa, the eternal soul, was pleased. He reinstated the hill in its original place for the benefit of the world.

Thus this is the eighteenth chapter of viShNuparva of harivaMsha, khila of shrimahAbhArata, hoisting the govardhana mountain.