A more precise diagram of the emanations [matching this picture from Robert Fludd but with an emphais on the spiritual aspect Marsilio is describing] is provided in the Map of the Egg. 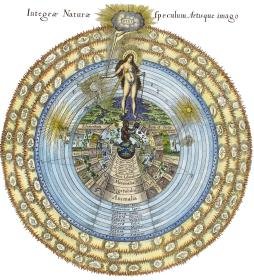 Unity, goodness, intellect, soul, nature, the body of the world, the image of higher worlds

The levels are distinguished in this way. The first is unity and the second is goodness, but these two are not truly distinct - although reason can distinguish them to some extent - for they have the same divine nature; and because unity soars high above everything, yet at the same time fills everything, it is called goodness. This unconditioned power to fill all things Plato, in the sixth book of the Republic, calls the Idea of the Good, but in his letters he calls it the Idea of good things; and so he calls it the Idea of the Good Itself and of those good things that come forth from the Good.

At the third level, corresponding to the radiance which emanates from the Light, is a Divine mind, which, if I may express it thus, conceives within itself manifold Ideas from the warmth of the single and supernal Light and of the Idea of the One, just as within the radiance many rays originate from a single ray of Light. Not only are the Ideas of created things comprised within this mind, but to this mind are related, as to their leader, many hosts of minds springing forth from that same divine Light from which that mind itself also comes forth.

After this world-archetype there follows, at the fourth level, the soul of the physical world. This is the rational world, coming forth from the intellectual world, as brilliance comes forth from radiance. And just as the brilliance is now combined with movement, so the soul, with a quick movement, reaches and pervades the principles of the unmoving Ideas.

This is followed by the fifth level, the nature of things, the seed-world, proceeding from the rational world of the soul as heat proceeds from brilliance.

At the sixth level is found this physical world, arising unconditionally from the seed-world, just as the procreation of things arises from warmth.

Light
Map of the Egg
Milky Way
One