Dr Seuss - To think that I saw it on Mulberry Street

About the wonderful imagination of the child and what it can do, and the need to keep your eyes open,

but also about the need to tell the truth.

In 1936, while Seuss and his wife were returning from an ocean voyage to Europe, the rhythm of the ship's engines inspired the poem that became his first book, And to Think That I Saw It on Mulberry Street. Based on Geisel's varied accounts, the book was rejected by between 20 and 43 publishers. According to Geisel, he was walking home to burn the manuscript when a chance encounter with an old Dartmouth classmate led to its publication by Vanguard Press. Geisel wrote four more books before the US entered World War II. This included The 500 Hats of Bartholomew Cubbins in 1938 as well as The King's Stilts and The Seven Lady Godivas in 1939, all of which were, atypically for him, in prose. This was followed by Horton Hatches the Egg in 1940, in which Geisel returned to the use of poetry. 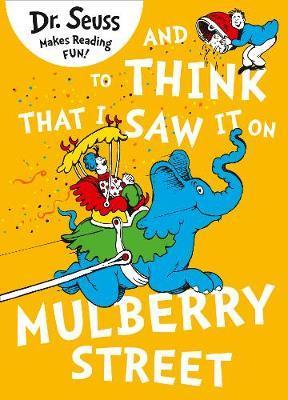 And To Think I saw it on Mulberry Streetby - Dr. Seuss

When I leave home to walk to school,Dad always says to me,
“Marco, keep your eyelids up
And see what you can see.”
But when I tell him where I've been
And what I think I've seen,
He looks at me and sternly says,
“Your eyesight's much too keen.”

“Stop telling such outlandish tales.
Stop turning minnows into whales.”
Now, what can I say
when I get home today?

All the long way to school
And all the way back,I've looked and I've looked
And I've kept careful track.
But all that I've noticed,
Except my own feet
Was a horse and a wagon on Mulberry Street.

That's nothing to tell of,
That won't do, of course....
Just a broken-down wagon
That's drawn by a horse.
That can't be my story.
That's only a start.
I'll say that a ZEBRA was pulling that cart!
And that is a story that no one can beat,
When I say that I saw it on Mulberry Street.

Yes, the zebra is fine,But I think it's a shame,
Such a marvelous beast
With a cart that's so tame.
The story would really be better to hear
If the driver I saw there were a charioteer.
A gold and blue chariot's something to meet,
Rumbling like thunder down Mulberry Street.

No, it won't do at all... a zebra's too small.
A reindeer is better; he's fast and he's fleet,
And he'd look mighty smart
On old Mulberry Street.

Hold on a minute! There's something wrong!
A reindeer hates the way it feels
To pull a thing that runs on wheels.
He'd be much happier, instead,
If he could pull a fancy sled.

Hmmm.. A reindeer and a sleigh..
Say-anyone could think of that,
Jack or Fred of Joe or Nat--
Say, even Jane could think of that.
But it isn't too late to make one little change.
A sleigh and an ELEPHANT!
There's something strange!
Say! That makes a story that no one can beat,
When I say that I saw it on Mulberry Street.

But now I don't know... It still doesn't seem right.
An elephant pulling a think that's so light
Would whip it around in the air like a kite.
But he'd look simply grand
With a great big brass band!
A band that's so good should have someone to hear it,
But it's going so fast that it's hard to keep near it.
I'll put on a trailer! I know they won't mind
If a man sits and listens while hitched on behind.

But now is it fair? Is it fair what I've done?
I'll bet those wagons weigh more than a ton.
That's really too heavy a load for one beast;I'll give him some helpers.
He needs two, at least.

The Mayor is there,
And he thinks it is grand,
And he raises his hat as they dash by the stand.
The Mayor is there and the Aldermen too,
All waving big banners of red, white and blue.
And that is a story that NO ONE can beat
When I say that I saw it on Mulberry Street!

With a roar of its motor an airplane appears
And dumps out confetti while everyone cheers
And that makes a story that's really not bad!
But it still could be better.
Suppose that I add...
A Chinaman who eats with sticks...
A big Magician doing tricks..
A ten-foot beard that needs a comb...
No time for more, I'm almost home.

I swung 'round the corner and dashed through the gate,
I ran up the steps and I felt simply GREAT!
For I had a story that NO ONE could beat!
And to think that I saw it on Mulberry Street!

But Dad said quite calmly,
“just draw up your stool”and tell me the sights on the way home from school”
There was so much to tell,
I JUST COULDN'T BEGIN!
Dad looked at me sharply and pulled at his chin.
He frowned at me sternly from there in his seat,
“was there nothing to look at..No people to greet?
Did nothing excite you or make your heart beat?”

“Nothing,” I said, growing read as a beet,
“But a plain horse and wagon on Mulberry Street.”

Believing in the spiritual world
LOVE
Squash the big I am

Serving others [charity]
Telling the truth