The temple at Knossos along with a host of other temple complexes were at one time part of the Cretan Mysteries.

In Greek legend, for example, the Labyrinth was an elaborate structure designed and built by Daedalus for King Minos of Crete at Knossos. It was a training labyrinth and a particularly difficult one. To make it more realistic, it was given a guardian - the Minotaur.  Daedalus had made the Labyrinth so cunningly that he himself could barely escape it after he built it.  Many would be out of body travellers died in this training ground, but Theseus succeeded helped by Ariadne, who provided him with a thread, to wind his way back again.

Although it is clear that a physical labyrinth did exist at Knossos, if we know our symbolism, we can see that the legend may also refer to the existence of the thread or cord during out of body travel and the existence of Temple hierophants - usually ladies - who taught initiates what to do.

As a site of spiritual interest Knossos has a lot going for it, being based on numerous fault lines.  A sort of telluric hot spot and a place of considerable earth forces.

Now Minos, landed on the Cretan shore,
Performs his vows to Jove's protecting pow'r;
A hundred bullocks of the largest breed,
With flowrets crown'd, before his altar bleed:
While trophies of the vanquish'd, brought from far
Adorn the palace with the spoils of war. 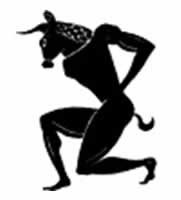 Mean-while the monster of a human-beast,
His family's reproach, and stain, increas'd.
His double kind the rumour swiftly spread,
And evidenc'd the mother's beastly deed.
When Minos, willing to conceal the shame
That sprung from the reports of tatling Fame,
Resolves a dark inclosure to provide,
And, far from sight, the two-form'd creature hide.

Great Daedalus of Athens was the man
That made the draught, and form'd the wondrous plan;
Where rooms within themselves encircled lye,
With various windings, to deceive the eye.
As soft Maeander's wanton current plays,
When thro' the Phrygian fields it loosely strays;
Backward and forward rouls the dimpl'd tide,
Seeming, at once, two different ways to glide:
While circling streams their former banks survey,
And waters past succeeding waters see:
Now floating to the sea with downward course,
Now pointing upward to its ancient source,
Such was the work, so intricate the place,
That scarce the workman all its turns cou'd trace;
And Daedalus was puzzled how to find
The secret ways of what himself design'd. 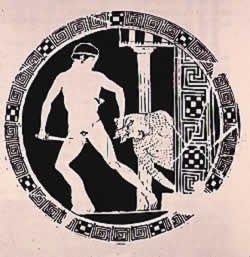 These private walls the Minotaur include,
Who twice was glutted with Athenian blood:
But the third tribute more successful prov'd,
Slew the foul monster, and the plague remov'd.
When Theseus, aided by the virgin's art,
Had trac'd the guiding thread thro' ev'ry part,
He took the gentle maid, that set him free,
And, bound for Dias, cut the briny sea.
There, quickly cloy'd, ungrateful, and unkind,
Left his fair consort in the isle behind,
Whom Bacchus saw, and straining in his arms
Her rifled bloom, and violated charms,
Resolves, for this, the dear engaging dame
Shou'd shine for ever in the rolls of Fame;
And bids her crown among the stars be plac'd,
With an eternal constellation grac'd.
The golden circlet mounts; and, as it flies,
Its diamonds twinkle in the distant skies;
There, in their pristin form, the gemmy rays
Between Alcides, and the dragon blaze.