It can also occasionally be used to describe a person able to have out of body experiences, but this usage is not quite correct as the more precise meaning is someone who is permanently in a state of suspension between the two realms. 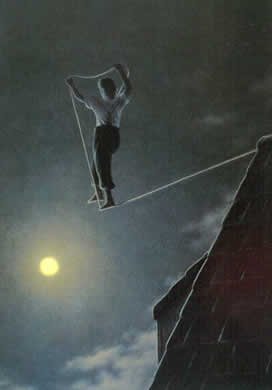 A person thus suspended is, in some sense, isolated from mundane matters and ordinary influences.  In effect this is mystical isolation.

Occasionally the symbolism is combined with that of sacrifice.  Odin for example sacrificed himself by hanging from the tree of life.

The implication of this is that sacrifice, self denial, continence and suffering are often part of this state.  Where the suspension is dreamy and inactive there is often a sort of negative sense of a Utopian dream world that neither helps the spiritual world nor the physical realm – the person is in between but achieves nothing.  So there is a danger in this state.

The symbolism is incorporated in that of The Hanged man.