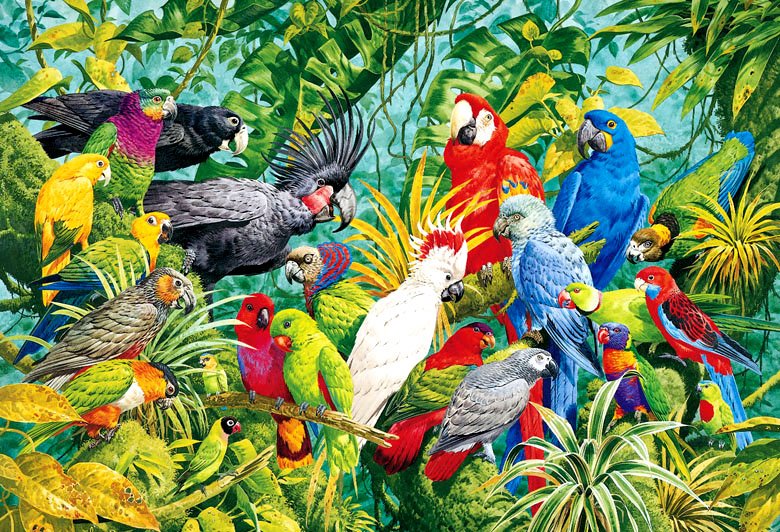 Parrots are birds of the roughly 393 species in 92 genera that make up the order Psittaciformes, found in most tropical and subtropical regions.

The order is subdivided into three superfamilies:

Parrots have a generally pantropical distribution with several species inhabiting temperate regions in the Southern Hemisphere, as well. The greatest diversity of parrots is in South America and Australasia.

Characteristic features of parrots include a strong, curved bill, an upright stance, strong legs, and clawed zygodactyl feet. Many parrots are vividly coloured, and some are multi-coloured. Most parrots exhibit little or no sexual dimorphism. They form the most variably sized bird order in terms of length.

Symbolically they take on the symbolism of all birds being principally of the Earth and the Air, but occasionally being found near Water. Despite the bill looking predatory they mostly eat seeds, nuts, and fruit, adding to the symbolism. The lories and lorikeets are specialised for feeding on floral nectar – which makes them a little special symbolically.

There is a marked and very interesting difference in some of the symbolism surrounding parrots. In their native habitat they are revered.  But in regions where they are used as captive pets and subjected to the whims of people, their symbolism has degenerated, almost reflecting the culture which is describing them. 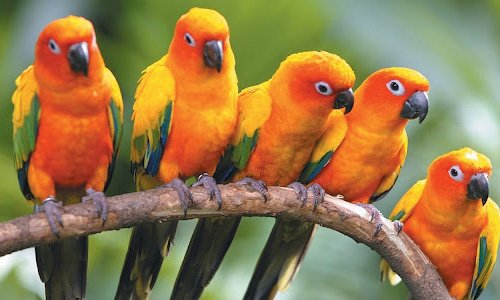 The symbolism of materialism

In those countries which have domesticated the parrot and put it into a cage, it is a symbol of a non-thinker, a person who mindlessly repeats and does what they are taught.  Parrots are in fact very intelligent birds, but teaching a parrot to simply repeat words is using its memory, not its intelligence or reasoning capacity.  One might say it almost embodies our education system and business culture, and the sort of person it produces – mindless, thoughtless, regurgitating and doing what it is told. 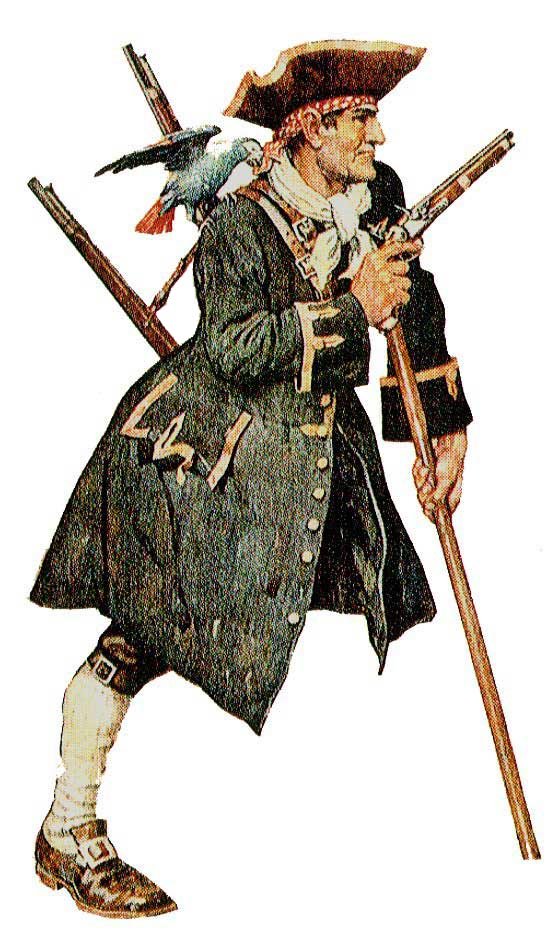 It has also become a symbol of indiscretion – again simply repeating what it has been told – a gossip.

The symbolism is remarkably accurate for ways that people may not have thought about.  If you ‘cage a bird’, in other words trap a free spirit, separate  a person from the spiritual world and trap it in an educational cage, or working environment cage, in which it is no longer free to receive inspiration, or wisdom  or express creativity, then indeed all it can do is regurgitate rubbish.

The result is also that the free spirit becomes depressed and often ill.

The World Health Organisation now estimate that one in five people in the ‘developed’ world are depressed.  Sayings about parrots, as a consequence, have been added to the modern English language. The verb "parrot" in the dictionary means "to repeat by rote". Also clichés such as the British expression "sick as a parrot" can refer to extreme disappointment and illness.

This negative symbolism is relatively recent.  When parrots were first brought as pets to the developed countries they were not caged, but treated as ‘familiars’, or as Hobs on the shoulder.  Long John Silver used a parrot as his familiar.  But as we can see the symbolism is not entirely positive, even then it was tarred with hints of sorcerors [at worst] and magicians [better] but something of the trickster.  The flamboyant nature of the parrot’s plumage in the drab world of the northern climes added to the magical allure. 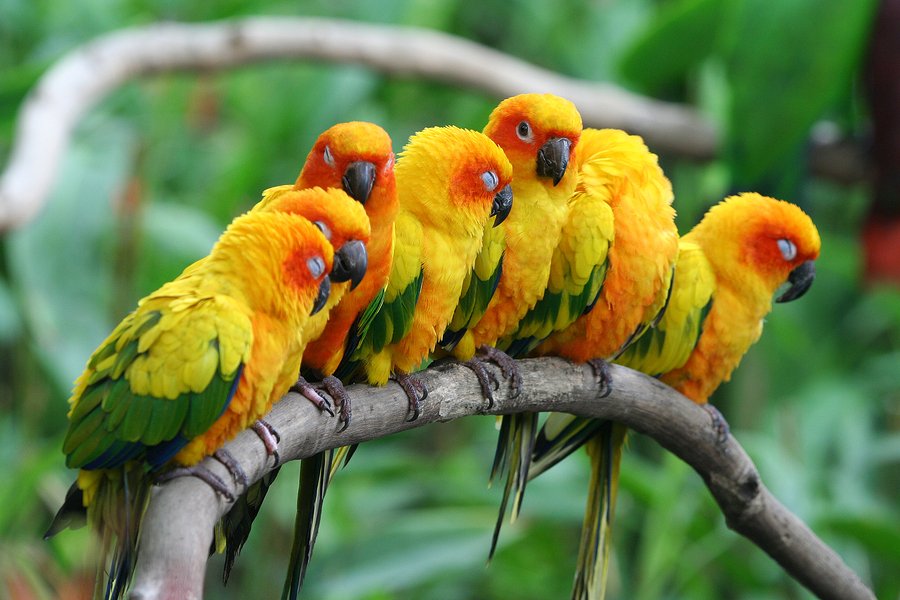 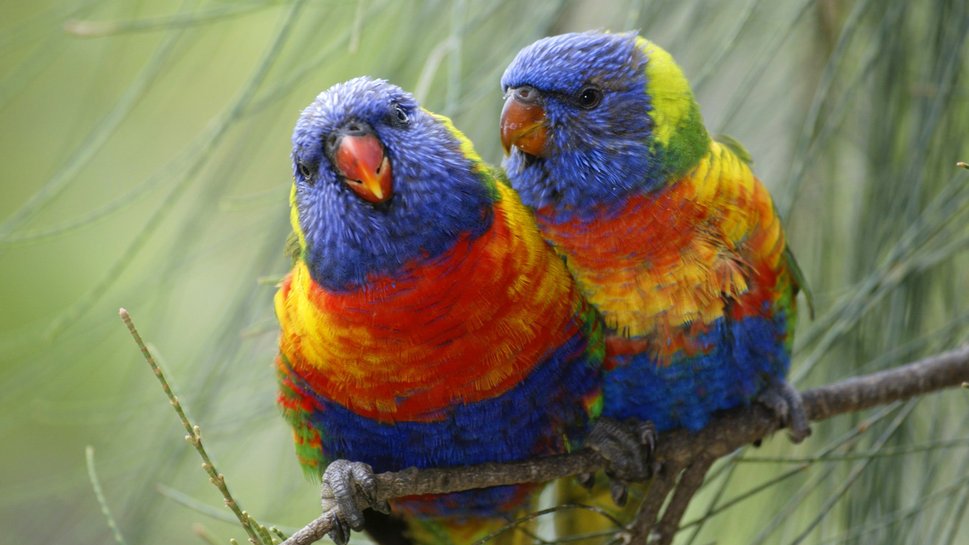 Once we delve down into the symbolism of parrots in their native lands we find a completely different story.

Spiritually aware cultures consider parrots to be sacred. The Moche people of ancient Peru, for example, worshipped birds as a whole and often depicted parrots in their art.

Parrots were so deeply revered that they were kept and nurtured in the ancient Anasazi civilization.  Macaws and Amazon parrots were kept by Southwestern Native American tribes. The Hopi tribe (descendants of the Anasazi) still have a Parrot kachina among their divine spirits, and parrot imagery is common throughout Southwest Indian art. The Hopi see the parrot as a directional guardian – a teacher -  associated with the south. 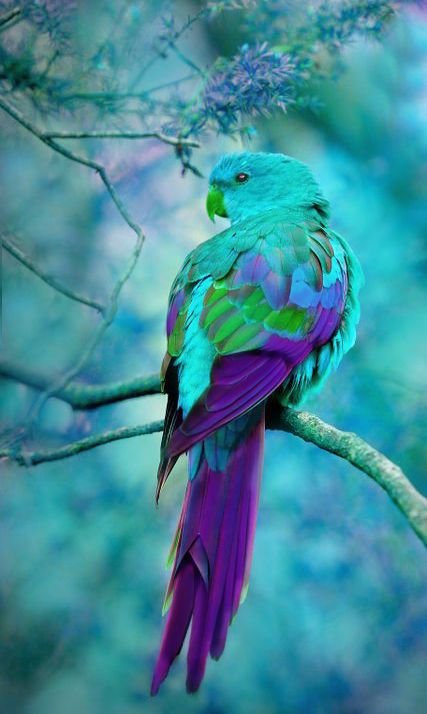 Some Pueblo tribes consider parrots a symbol of fertility – so there is sexual symbolism intertwined in this too. Parrots mate for life, thus the Parrot is also a symbol of fidelity and love.  In India, the god of love, Kama, rode on a parrot as his preferred vehicle.

In ancient Rome, the parrot held the post of herald of the emperors, announcing their arrival to the Roman citizens.

Parrots are used as clan animals in some Native American cultures. Tribes with Parrot Clans include the Hopi tribe (whose Parrot Clan is named Kyarngyam or Gash-wungwa), the Zuni, and other Pueblo tribes. Many Pueblos also have a Parrot Dance among their tribal dance traditions.

Parrots are popular in Buddhist scripture and many writings about them exist. For example, Amitābha once changed himself into a parrot to aid in converting people. Another old story tells how after a forest caught fire, the parrot was so concerned, it carried water to try to put out the flames. The ruler of heaven was so moved upon seeing the parrot's act, he sent rain to put out the fire. In Chinese Buddhist iconography, a parrot is sometimes depicted hovering on the upper right side Guan Yin clasping a pearl or prayer beads in its beak.

Parrots have very long life spans, and have even been known to outlive their human companions, this has led to their being associated with immortality.  Thus again as with many birds and their symbolism – the parrot is in some cultures a symbol of the Higher spirit – the immortal part of us all.

Parrot is also a bird of the sun. And the Higher spirit seeks unity with the Sun, whilst the soul heads off to the Moon. 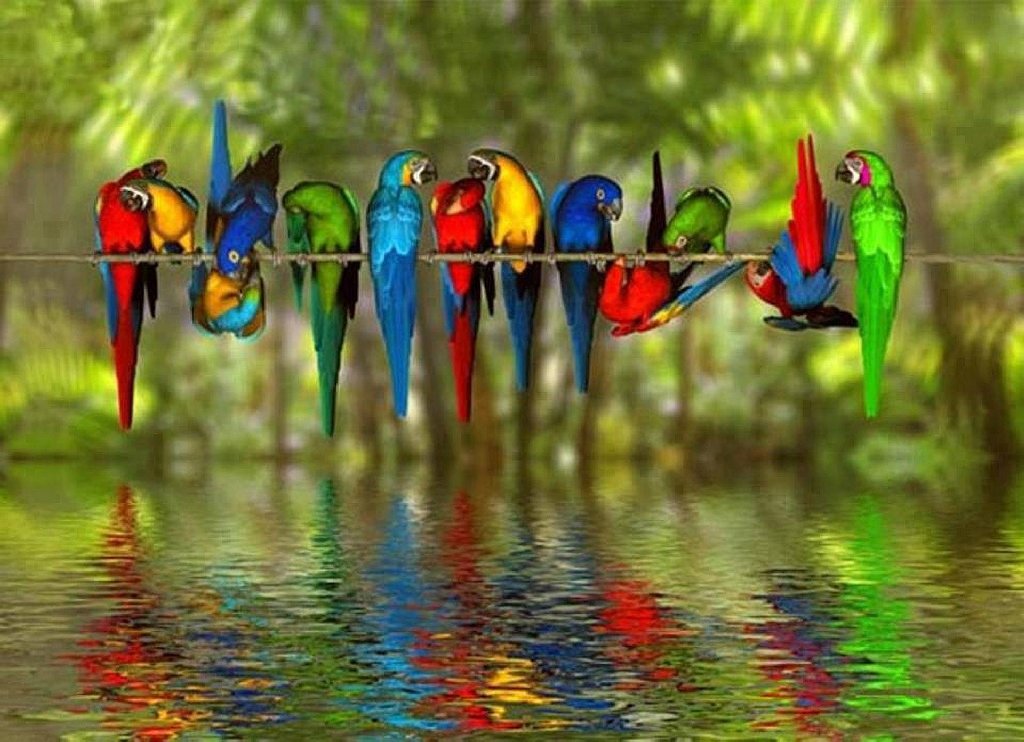 Comparing the two forms of symbolism 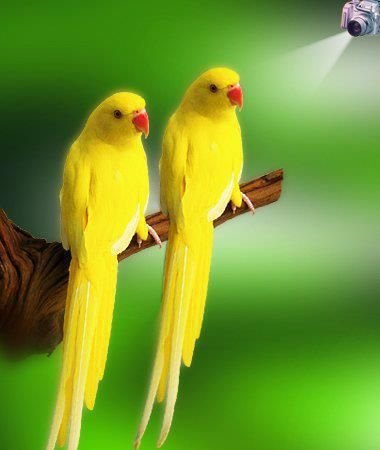 As you can thus see, the difference between the two symbolic meanings that have evolved is very very marked.

In spiritually aware cultures, the people revere, look after and keep parrots to learn from them.

In those cultures which are not spiritually aware and which have degenerated into a sort of rabid materialism, the parrot has become simply a means of showing off the subjugation skills of the owner.  ‘This is what we can teach this parrot’, as opposed to ‘what can we learn from the parrot?’

The dominant will and ego of the owner thus creates a new symbolism, a symbol of western society as a whole – the mindless subjugation of the many by the powerful egotistical will of the few.  The parrot is almost an allegory for the entire planet.

If we take a parrot to represent a spiritually free and spiritually aware individual who can ‘fly’ figuratively speaking, through the rainbow [the colours in its plumage], then it should come as no surprise that the parrot is – figuratively and literally endangered. 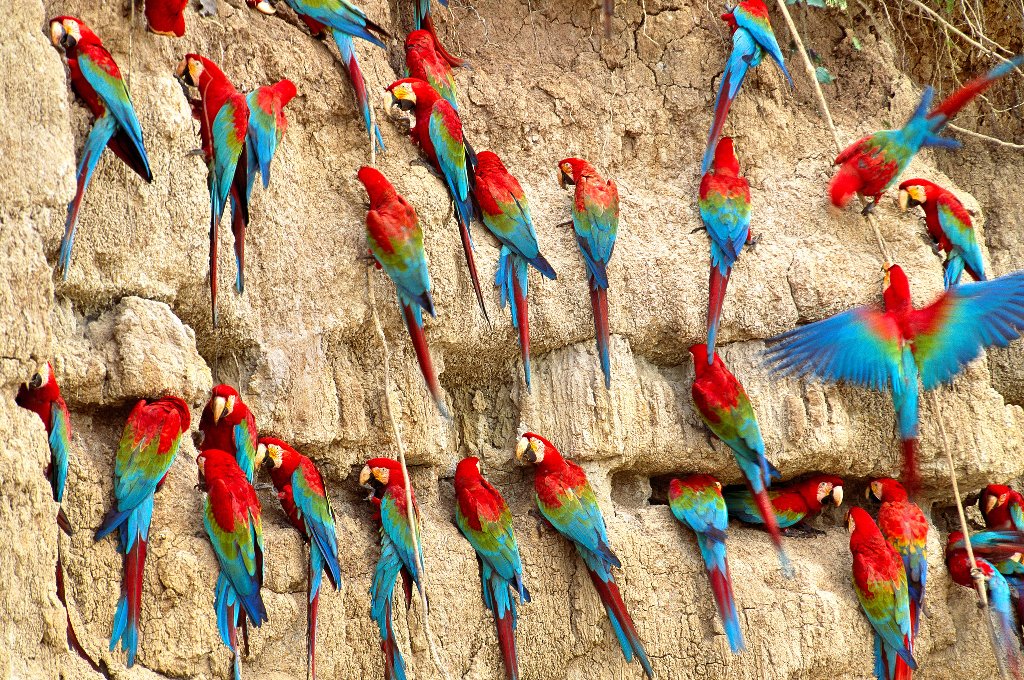 Trapping wild parrots for the pet trade, as well as hunting, habitat loss, and competition from invasive species, has diminished wild populations, with parrots being subjected to more exploitation than any other group of birds.  Forest parrots are overwhelmingly tree-cavity nesters, meaning that primary forest destruction has a severe impact on the availability of their nesting sites and consequent reproductive success.

Scientists, including staff from BirdLife International and the Australian National University, have published new research indicating that parrots (Psittaciformes) are among the most threatened groups of bird species, with 28% of extant species (111 out of 398) classified as globally threatened on the IUCN Red List.

“This study confirms that, as a whole, parrots face a higher rate of extinction than any other comparable bird group. Indeed, 56% of all parrot species are in decline. They face a wide range of threats, but loss and degradation of forest habitat, agricultural expansion, and hunting and trapping – parrots are the most common bird group reported in the wildlife trade – are all major factors. However, this study identifies conservation priorities for these attractive, intelligent birds – which have beguiled and fascinated humans since we first set eyes upon them – and offers a way to prevent more species following the Carolina Parakeet and Paradise Parrot into extinction” Dr Stuart Butchart, Head of Science at BirdLife International.

Perhaps we can also save the shamans, the magicians, the healers, the mystics, the poets, the artists and all the other spiritually gifted people too. 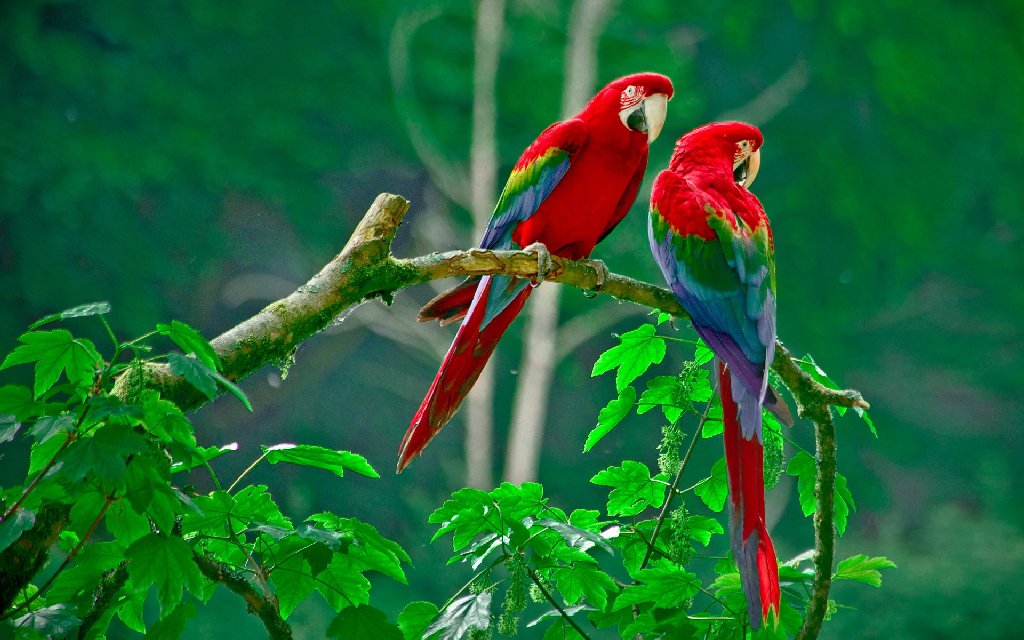