Whereas the bull may be symbolic of masculinity and power possibly with a measure of aggression, the ox is symbolic of power emasculated or perhaps more correctly power harnessed.

Aggression and strength were highly valued virtues to  Warrior Germanic tribes, for example.  The untamed bull was venerated in all parts of Europe settled by the Germanic peoples, for its strength and warlike disposition.  By contrast, the counterpart symbol, the exact opposite symbol was the ox with its  links to settled agricultural and non war like pursuits and its docile nature.

Thus the ox is also a symbol of creativity harnessed, the power of co-creation put to constructive as opposed to destructive use.

It also has identical symbolism to the tamed Lion 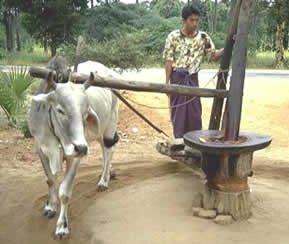 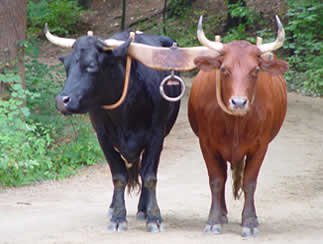 A Dictionary of Symbols – J E Cirlot
For obvious reasons, the ox became a symbol of sacrifice, suffering, patience, and labour.  In Greece and Rome it was regarded as an attribute of agriculture and of foundation laying and so by extension was the yoke.
Roman generals who had been granted the honour of a triumph would sacrifice white oxen to the Capitoline Jupiter as part of the ceremony.
In Herrard of Landsberg's Hortus Deliciarum,  the moon's chariot is drawn by oxen, which points to the emasculated character of the animal.  In Medieval emblems, the ox is frequently found symbolising patience, submissiveness and the spirit of self sacrifice.