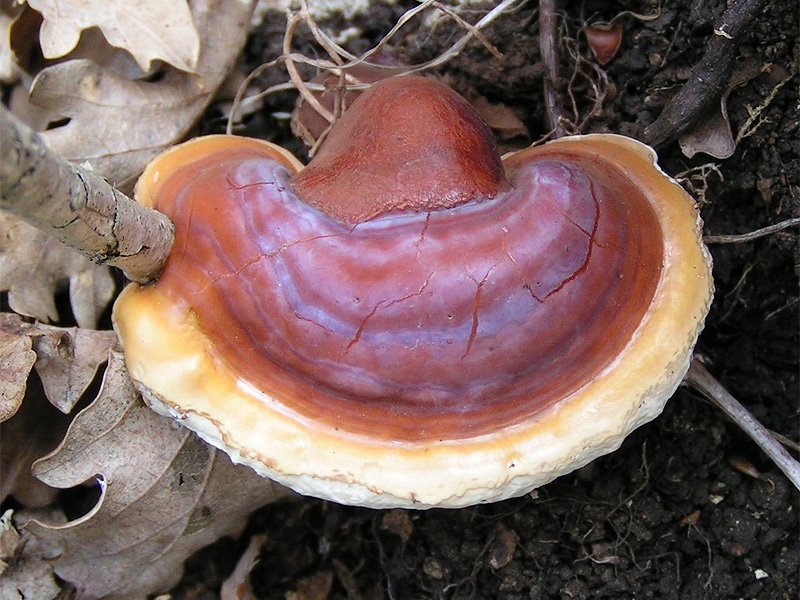 Reishi or Lingzhi are the common names for a medicinal mushroom, whose botanical name is Ganoderma lucidum.

Ganoderma is a genus of polypore mushrooms that grow on wood, and include about 80 species, many from tropical regions. Because of their extensive use in traditional Asian medicines, and their potential in bioremediation, they are a very important genus.

Called the “mushroom of immortality,” Reishi is edible in the sense that it is not poisonous, but is not food.  Instead it has been used in traditional Chinese medicine for thousands of years.  It is one of the most popular medicinal mushrooms in China, Japan, and Korea and has been the subject of some intensive modern biochemical and pharmacological research over the past few decades, and modern pharmacological tests have demonstrated that the use of this fungi was justified.

Although we will be adding observations as and when they appear in PubMed, it may be useful to sumarise the theoretical benefits and healing properties of Reishi.  According to researchers at the Centro de Investigación y de Estudios Avanzados in Mexico [see references],

… some important characteristics of this fungus [have been described], such as immunomodulating, antiallergic, antiradiation, antitumor, anti-inflammatory, antiparasitic, and antioxidant properties. Some benefits for the cardiovascular, respiratory, endocrine, and metabolic systems have also been described.
In Asia, Ganoderma has been administered for centuries as a treatment for cancer; it exhibits anticancer effect alone or in combination with chemotherapy and radiotherapy. Ganoderma decreases the viability of human cancer cells, induces cell apoptosis, inhibits cell proliferation, suppresses the motility of invasive breast and prostate cancer cells, and prevents the onset of various types of cancer.
Chen and Zhong reported the inhibition of tumor invasion, metastasis and cell adhesion, promotion of cell aggregation, and suppression of cell migration in human colon tumor cell lines. Ye et al. reported antitumor action in vitro against mouse lymphocytic leukemia, and Lai et al. reported the suppression of epidermoid cervical carcinoma. Water-soluble polysaccharides from Ganoderma act over more than 20 types of cancer and strongly inhibit tumor growth.

One of the overwhelmingly important reasons why Ganoderma is regarded in such high esteem in TCM is that, being edible, it does not produce any toxicity or side effects.  To put this in simple terms, it does no harm, does not make you sick and does not give you diarrhoea.

There also appears to be some immunostimulatory activity and anti-inflammatory activity too, which means it has the effect of easing pain and boosting our own defences.

Cancer in particular, for which it is well known, can be caused by parasites, viruses and bacteria and these pathogens actually tend to be somewhat indiscriminatory as to where they end up and do damage.  Toxins like heavy metals can do the same thing.  Reishi does not act on a specific organ; which is actually an advantage when fighting cancer, as in reality you are fighting the pathogen, wherever it happens to be.

Reishi also seems to help in normalization of the organ function that has been damaged.

There are some sceptics who pour scorn on the claims made for reishi that it has helped with the prevention and treatment of various diseases, not just cancer, including cardiovascular, respiratory, endocrine, and metabolic systems, or that it can be used as an alternative adjuvant in the treatment of leukemia, hepatitis, and diabetes.

But the pathogens that cause these diseases are all the same.

A heavy metal particle in the lung causes one sort of effect, whereas in the pancreas it can cause diabetes.  This rather implies that Reishi is actually acting via its effects on pathogens rather than the body itself.  It appears to be a very effective pathogen killer and indeed it has been shown to be antiparasitic, antiviral and antibacterial.

All these new studies on poor little mice, or cancerous cells on petri dishes misses this vital point.

Thus although we have provided some references on all this research into the regulation of cell cycle, cell signaling, the inhibitory activity against invasive and metastatic behaviors (i.e., adhesion, migration, and angiogenesis) in various cancer cells in vitro or implanted in mice, we believe that the research should be based on what Reishi does to pathogens, and that research should be targeted at which specific pathogens it is able to fight.