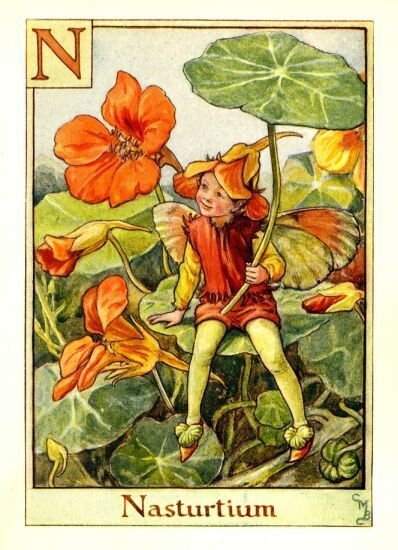 Tropaeolum commonly known as nasturtium, is a genus of roughly 80 species of annual and perennial herbaceous flowering plants. It was named by Carl Linnaeus and is the only genus in the family Tropaeolaceae. The nasturtiums received their common name because they produce an oil that is similar to that of watercress, which is rather confusingly named Nasturtium officinale.

The genus Tropaeolum, native to South and Central America, includes several very popular garden plants, the most commonly grown being T. majus, T. peregrinum and T. speciosum. One of the hardiest species is T. polyphyllum from Chile, the perennial roots of which can survive the winter underground at altitudes of 3,300 metres (10,000 ft).

The observations for this genus of plants are specific as to which one of the above is being described, however,  it seemed helpful to group them for comparative purposes. 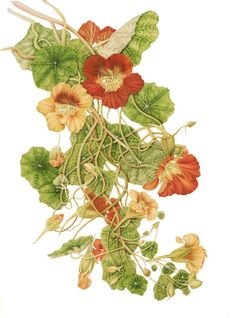 Nasturtiums were once known commonly as "Indian cresses" because they were introduced from the Americas, known popularly then as the Indies, and used like cress as salad ingredients. The first Tropaeolum species was imported into Spain by the Spanish botanist Nicolás Monardes. He published an account in 1569 entitled Joyful News out of the Newe Founde Worlde in which he described, among other things, the plants and animals discovered in South America. The English herbalist John Gerard reports having received seeds of the plant from Europe in his 1597 book Herball, or Generall Historie of Plantes. Gerard called the plant "Indian Cress" in his herbal. He wrote:

unto the backe part (of the flower) doth hange a taile or spurre, such as hath the Larkes heele, called in Latine Consolida regalis. 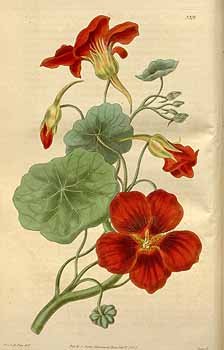 Tropaeolum is a genus of dicotyledonous annual or perennial plants, often with somewhat succulent stems and sometimes tuberous roots.

Plants in this genus have showy, often intensely bright flowers.  The flowers are bisexual and set singly on long stalks in the axils of the leaves.

They have five sepals, the uppermost of which is elongated into a nectar spur. The five petals are clawed, with the lower three unlike the upper two. The eight stamens are in two whorls of unequal length and the superior ovary has three segments and three stigmas on a single style.

Plants have rounded, peltate (shield-shaped) leaves with the petiole in the centre.  The alternate leaves are hairless and entire or palmately lobed. The petioles or leaf stalks are long and in many species are able to twine round other stems to provide support.

The fruit is naked and nut-like, with three single seed segments.

The most common flower in cultivation is a hybrid of T. majus, T. minus and T. peltophorum.   It is mostly grown from seed as a half-hardy annual and both single and double varieties are available. It comes in a range of forms and colours including cream, yellow, orange and red, solid in colour or striped and often with a dark blotch at the base of the petals.

It is vigorous and easily grown and does well in sun. It thrives in poor soil and dry conditions, whereas in rich soil it tends to produce much leafy growth and few flowers. Some varieties adopt a bush form while others scramble over and through other plants and are useful for planting in awkward spots or for covering fences and trellises.

Quite a number of cultivars have gained the Royal Horticultural Society's Award of Garden Merit.

Perry, Frances (1972) - Flowers of the World
Tropaeolum majus was named by the Swedish botanist Carl Linnaeus, who chose the genus name because the plant reminded him of an ancient custom. After victory in battle, the Romans used to set up a trophy pole called a tropaeum (from the Greek tropaion, source of English "trophy"). On this the armour and weapons of the vanquished foe were hung. Linnaeus was reminded of this by the plant as the round leaves resembled shields and the flowers, blood-stained helmets. 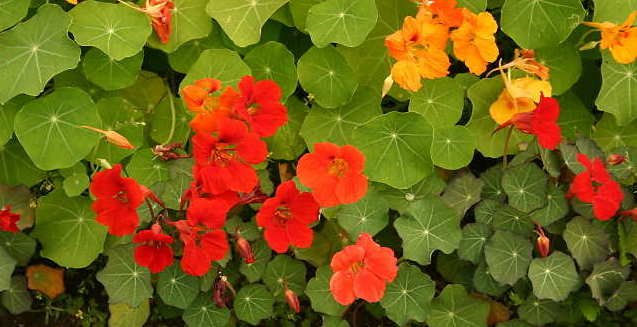 Nasturtiums are used as companion plants for biological pest control, repelling some pests, acting as a trap crop for others and attracting predatory insects.  In effect they contain quite a number of chemicals that are natural insecticides, fungicides and herbicides.  This is why we have placed Nasturtium under the heading of medicine and not food.

If one thinks about any plant logically, you should be able to see that there is no value for any plant in you consuming the leaves or the flowers.  By doing this you have, to all intense and purposes reduced any chance that the plant can produce progeny – babies! 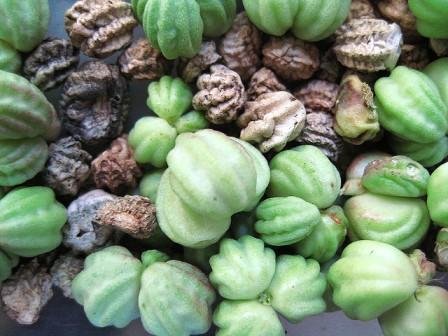 Nasturtiums propagate by seed and the seed has an outer layer – the pericarp and an inner hard layer.  Thus the plant is actively wanting you to eat the seeds whole and will reward you with the pericarp, whilst your digestive juices soften up the seed enough to enable it to germinate.

But at the moment, it would appear that we are encouraged by some to eat the leaves and the flower.

Wikipedia
All parts of Tropaeolum majus are edible. The flower has most often been consumed, making for an especially ornamental salad ingredient; it has a slightly peppery taste reminiscent of watercress, and is also used in stir fry. The flowers contain about 130 mg vitamin C per 100 grams (3.5 oz), about the same amount as is contained in parsley. Moreover, they contain up to 45 mg of lutein per 100 g, which is the highest amount found in any edible plant.

The shoots of nasturtium contain Benzyl cyanide, which like related benzyl derivatives, is an irritant to the skin and eyes and is, according to Wikipedia, toxic, as such it is perhaps a little unwise to eat the shoots. 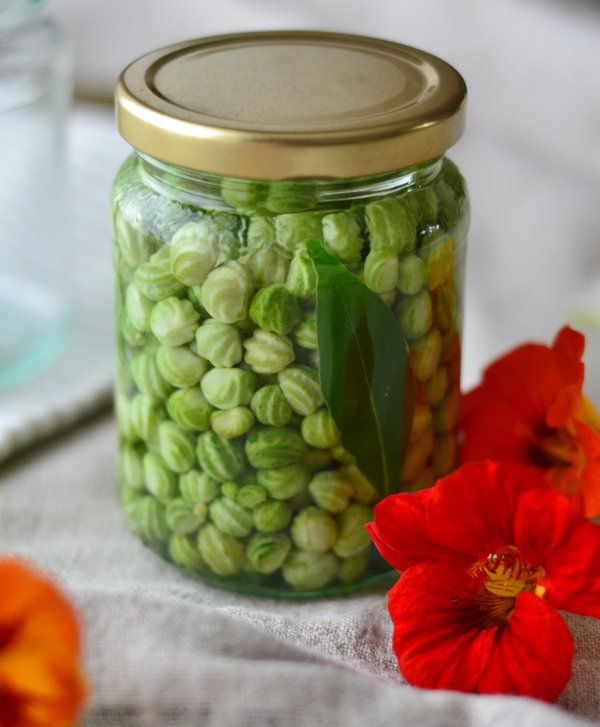 Wikipedia
The unripe seed pods can be harvested and dropped into spiced vinegar to produce a condiment and garnish, sometimes used in place of capers.

Nasturtium as a whole contains a chemical called Glucotropaeolin, which is an Isothiocyanate,  Isothiocyanates occur widely in nature and give the hot peppery flavour to many foods. Vegetable foods with characteristic flavours due to isothiocyanates include wasabi, horseradish, mustard, watercress, nasturtiums, and capers. They are all members of the order Brassicales, which is characterised by the production of glucosinolates, and of the enzyme myrosinase, which acts on glucosinolates to release isothiocyanates.  And we find that

This sounds somewhat alarming, whereas one is unlikely to eat enough to do any harm.  But the overall message from the plant appears to be – “suck my seeds but don’t eat me”!!

The medicinal chemical of interest in the pericarp of the seeds is Chlorogenic acid.  The observations describe why this chemical is of interest, however, it is also worth following the link, as there are observations for the chemical itself that cover properties not yet identified in research papers for Nasturtium. 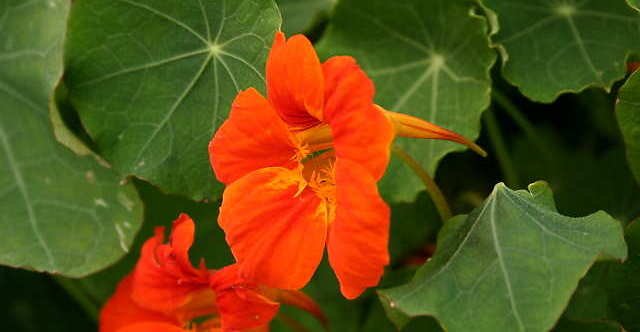