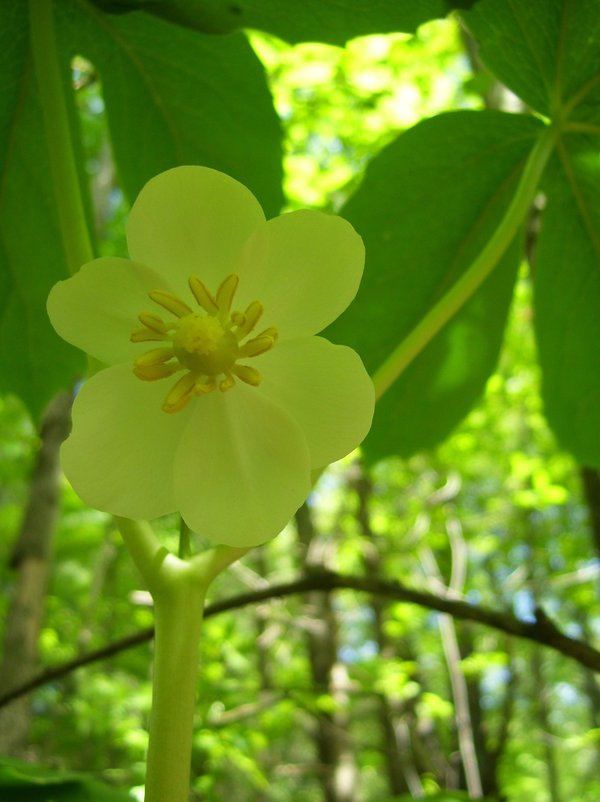 It is widespread in the wild across most of the eastern United States and southeastern Canada, but is also grown as an ornamental plant for its attractive foliage and flowers.

There is another plant also called the Mayapple and related - Podophyllum pleianthum L. (Berberidaceae) -- Chinese Mayapple.  We have grouped them together for convenience, but Dr Duke's analyses are kept separate, so that you can compare the two.

All the parts of the plant, excepting the fruit, are poisonous. Even the fruit can cause unpleasant indigestion.  But all plants are our allies if we understand them, as we shall see.

Podophyllum is an herbaceous perennial plant in the family Berberidaceae, described as a genus by Linnaeus in 1753. In the past, several species were included in the genus, but all but two have been transferred to other genera (Dysosma, Pilea, and Sinopodophyllum). 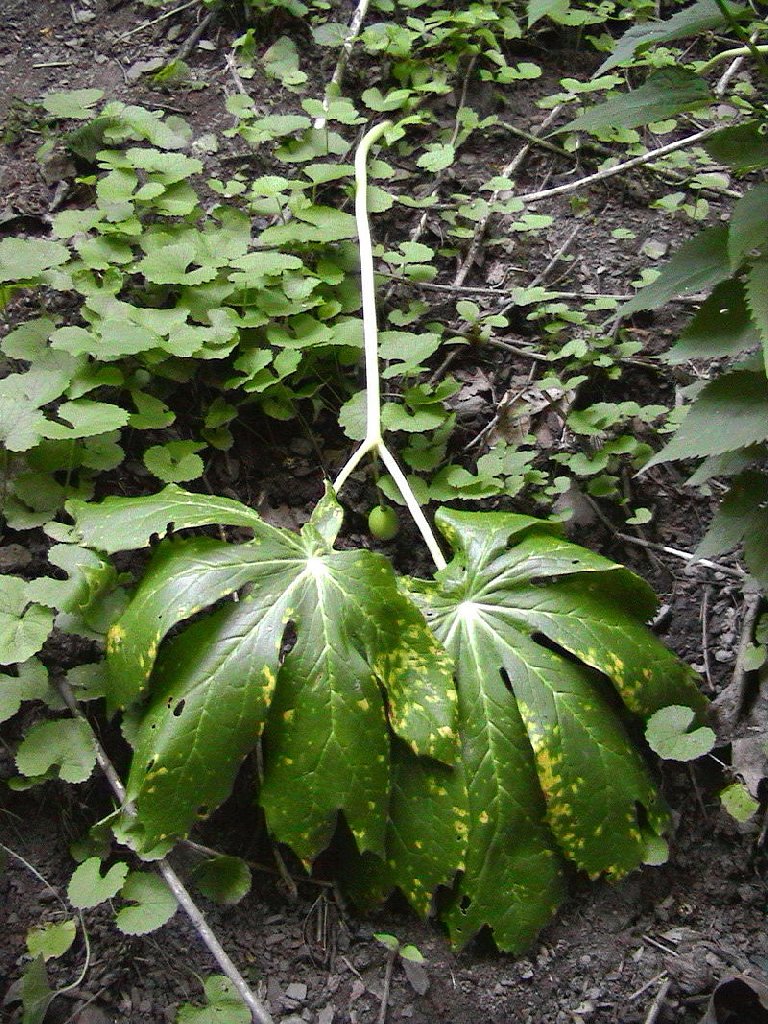 Mayapples are woodland plants, typically growing in colonies derived from a single root. The stems grow to 30–40 cm tall, with palmately lobed umbrella-like leaves up to 20–40 cm diameter with 3–9 shallowly to deeply cut lobes. The plants produce several stems from a creeping underground rhizome; some stems bear a single leaf and do not produce any flower or fruit, while flowering stems produce a pair or more leaves with 1–8 flowers in the axil between the apical leaves. The flowers are white, yellow or red, 2–6 cm diameter with 6–9 petals, and mature into a green, yellow or red fleshy fruit 2–5 cm long.

Though the common name is mayapple, it is the flower that appears in early May, not the "apple". The fruit or "apple" is produced early summer and ripens later in summer.

Many species of plants have mycorrhizae to assist with nutrient uptake in infertile conditions. Mayapple plants are considered obligately dependent upon such mycorrhizae, although it may also be facultatively dependent upon rhizome age and soil nutrient levels. Plants are commonly found infected by the rust Allodus podophylli, appearing as honeycomb-patterned orange colonies under the leaves, and yellowish lesions on the upper surface 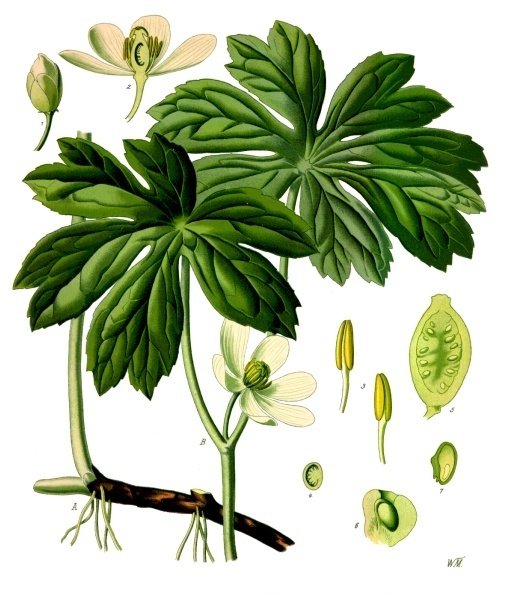 The substance that Mayapples contain - podophyllotoxin or podophyllin -  according to Wikipedia "has been  used as a purgative and as a cytostatic"!  Posalfilin is a drug containing podophyllin and salicylic acid that is used to treat the plantar wart, in other words the plant does have antiviral activity as warts are caused by viruses.

Mayapple has been used by American Indians as an emetic, cathartic, and antihelmintic agent.  And here we see some of its main medicinal value as it is an antiparasitic of some vigour.  But occasionally strong infestation requires strong medicine.

The Native American Indians appear to have known how to extract the needed medicinal compounds as the rhizome was boiled -  there is little detail here, but it is possible that boiling drove off the volatile poisonous chemicals - but we do not want to delve into speculation.  The clear message is that the rhizome is the medicinal part of the plant and it has to be processed before it can be used as an antiparasitic plant.

It is worth adding that the settlers saw the value in this plant as they too used it as medicine in the early days.