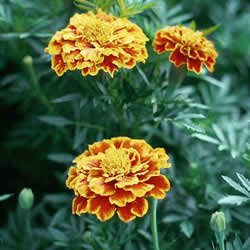 Marigold is the common name for the plant Tagetes spp.  It is a genus of 56 species  of annual and perennial mostly herbaceous plants in the sunflower family.  Marigolds are recorded as a food plant for some Lepidoptera caterpillars including the Dot Moth.  So we know from this that they contain toxins.

In the rather predictable way we often find with psychonauts who appear to be willing to believe anyone and smoke anything to get hallucinations, Siegel et al have stated that “when the eyes are closed, the Huichol smoking blend is said to be able to produce images and visions similar to those produced by peyote”.  So the claim is that one of the members of this family of plants can produce a spiritual experience.  One species mentioned specifically is  Tagetes lucida (Mexican marigold, pericón, Mexican mint marigold, Mexican tarragon, Spanish tarragon, or Texas tarragon)  -  a half-hardy sub-shrub native to Mexico and Central America.

Richard Evans Schultes and Ronald Okun have also said that Tagetes lucida was used by the Aztecs in their ritual incense known as yyauhtl. They also stated that it was used by the Huichol, mixed with Nicotiana rustica (a potent wild tobacco), for “its claimed psychotropic effects”.

But they didn't smoke it and if they did get hallucinations they were accidental, because Tagetes has widespread use wherever it is found as a parasite and insect repellant and it is extraordinarily effective.

Marigolds have been under investigation for a number of years as an eco friendly mechanism of controlling and eradicating plant parasites, animal parasites and human parasites.

You spray the plants, spray or immerse the animals in a bath made from the extract and for human beings you can produce insect repellants to be applied to the skin.  According to eHealthme there have been no adverse reports from the use of Tagetes if used properly - that is externally.

Marigolds appear to be extraordinarily effective against ticks

Ticks have major economic impact through diseases they transmit, direct losses due to their detrimental effect and the efforts invested in prevention measures directed against them. Chemical acaricides represent the main line of anti-tick defense in both humans and domestic animals, but increasing concerns regarding development of acaricide resistance, especially in the cattle tick Rhipicephalus microplus, and environmental safety issues indicate the need for other, less aggressive but equally efficient methods. This paper aims to evaluate the potential, the scientific and economical limitations and future research directions regarding different alternative methods of tick control and their use in integrated pest management, with a separate reference to the pet industry. New research data in each field is presented and the economical aspects for each approach are individually emphasized.  PMID:  22424918

Interactions of a biopesticidal formulation of steam distilled shoot extract of Mexican marigold, Tagetes minuta, and entomopathogenic fungi were evaluated for management of the sugarbeet root maggot, Tetanops myopaeformis (Röder). Shoot extract plus surfactant (E-Z Mulse) (=T. minuta oil) was used in a 65:35 ratio to test the hypothesis that this fungicidal and nematocidal biopesticide causes dose-dependent mortality and developmental arrest of T. myopaeformis but does not interfere with the action of entomopathogenic fungi when applied together. A soil-petri dish bioassay system was developed to test the hypothesis. For diapausing, nonfeeding but active 12-mo-old third-instar larvae, 0.5% T. minuta oil treatment (=0.325% active ingredient [AI]) was sufficient to prevent pupation without mortality, but 0.75% T. minuta oil treatment (=0.458% AI) was lethal for 93% of the test insects. The effect of T. minuta oil on fungal efficacy under simultaneous use was studied using a model system of two entomopathogenic fungi, Beauveria bassiana (Bals.) Vuillemin. TM28 and Metarhizium anisopliae variety anisopliae (Metsch.) Sorokin MA 1200, in a soil-based bioassay with larval sugarbeet root maggots. No adverse effects of T. minuta oil on action of entomopathogenic fungi and no synergy were found; an additive effect of the T. minuta oil and each fungal isolate separately was found.  PMID:  20550813

and perhaps most exciting of all they have been used against the malarial carriers with great success.  In this case they can be used to spray areas where the carriers are known to be, the spray has been shown to kill larvae and insects, as such it is extremely cost effective.  And ecologically it appears to do no harm.  The observations provide more details. 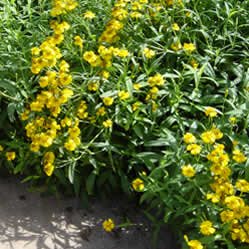 If we home in on coumarin we find that it is toxic, none of the other chemicals have 'psychoactive' properties. Thus there are only two ways that this plant could give you a spiritual experience and both work via  poisoning

Tagetes heals by being a preventer of illness in the first place, which is, in the end, the best way forward.