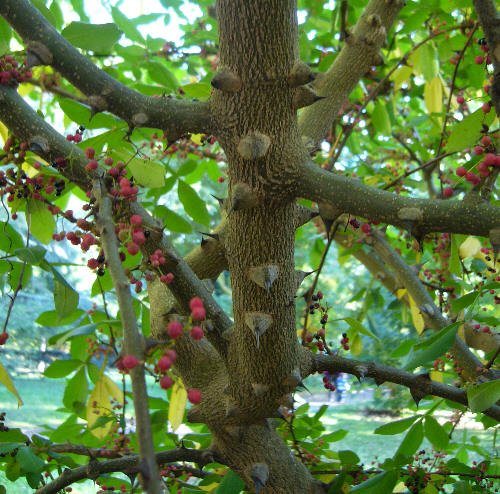 Zanthoxylum alatum ROXB. (Rutaceae) is also known as  Indian Prickly Ash, and the Wartara Oil Tree.  It belongs to the same family as the Northern prickly ash, also on the site.

Zanthoxylum (including genus Fagara) is a genus of about 250 species of deciduous and evergreen trees and shrubs in the citrus or rue family, Rutaceae, native to warm temperate and subtropical areas worldwide. Several of the species have yellow heartwood, to which their generic name alludes.

The fruit of several species is used to make the spice, Sichuan pepper. They are also used as bonsai trees. Historically, the bark was widely used for toothache, colic, and rheumatism. Common names include "prickly ash" and "Hercules club".