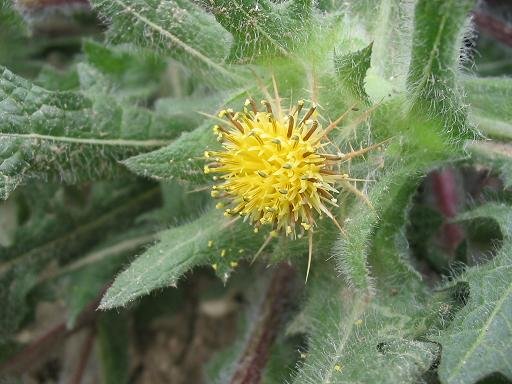 Cnicus benedictus also called St. Benedict's thistle, blessed thistle, holy thistle or spotted thistle, is a thistle-like plant in the family Asteraceae, native to the Mediterranean region, from Portugal north to southern France and east to Iran. In Mrs Grieve’s Botanical it is also given the name Carbenia benedicta  and Carduus Benedictus.  It is the sole species in the monotypic genus Cnicus.

It is known in other parts of the world, including parts of North America, as an introduced species and often described there as ‘a noxious weed’ – possibly because its medicinal properties are not known there.  Although it is a native of Southern Europe, occurring there in waste, stony, uncultivated places, it grows more readily in the UK in cultivation and has become naturalised there. Though occurring sometimes in waste places in England as an escape from cultivation, it cannot be considered indigenous to this country.

The Holy thistle and Milk thistle described elsewhere on the site should not be confused.  Although they belong to the same family – Asteraceae, they are different plants with different properties medicinally.

Cnicus benedictus  is an annual plant.  It grows to around 2 feet [60 cm] tall, and the stem is reddish, slender, very much branched and scarcely able to keep upright under the weight of its leaves and flowerheads.

The leathery, hairy leaves are up to 30 cm long and 8 cm broad. They are long, narrow, clasping the dull green stem, with prominent pale veins, the irregular teeth of the wavy margin ending in spines.

The flowers are pale yellow, produced in a dense flowerhead (capitulum) 3–4 cm diameter, surrounded by numerous spiny basal bracts. The flowers are in green prickly heads, each scale of the involucre, or covering of the head, ending also in a long, brown bristle.

The whole plant, leaves, stalks and also the flowerheads, are covered with a thin down. It grows more compactly in some soils than in others.

Being an annual, Blessed Thistle is propagated by seed. It thrives in any ordinary soil. Allow 2 feet each way when thinning out the seedlings. The seeds are usually sown in spring, but if the newly-ripened seeds are sown in September or October in sheltered situations, it is possible to have supplies of the herb green, both summer and winter. 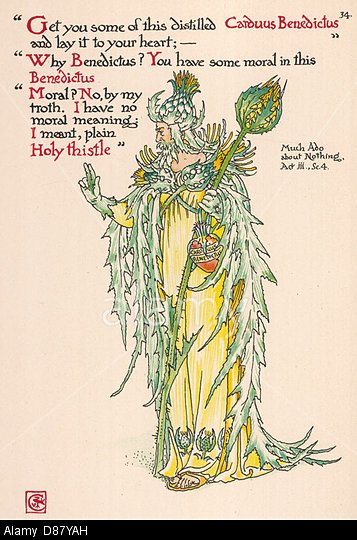 The Holy Thistle was once cultivated in the UK for its medicinal properties and was then known as  the Blessed Thistle.

Its common names – Blessed and Holy thistle- are said to derive from  “its high reputation as a heal-all, being supposed even to cure the plague”. It is mentioned in all the treatises on the Plague, and especially by Thomas Brasbridge, who in 1578 published his Poore Man's Jewell, “that is to say, a Treatise of the Pestilence, unto which is annexed a declaration of the vertues of the Hearbes Carduus Benedictus and Angelica.”

The 'distilled' leaves, he says 'helpeth the hart,' 'expelleth all poyson taken in at the mouth and other corruption that doth hurt and annoye the hart,' and 'the juice of it is outwardly applied to the bodie' ('lay it to your heart,' Sh.), 'therefore I counsell all that have Gardens to nourish it, that they may have it always to their own use, and the use of their neighbours that lacke it.'

There are some descriptions which imply the plant was first introduced into cultivation in the UK by Gerard in 1597, but as Brasbridge’s book was published some twenty years earlier, it would appear to have been in cultivation much earlier, and in fact it is described and its virtues enumerated in the Herbal of Turner in 1568.

Shakespeare in Much Ado about Nothing, says: 'Get you some of this distilled Carduus Benedictus and lay it to your heart; it is the only thing for a qualm.... I mean plain Holy Thistle.' 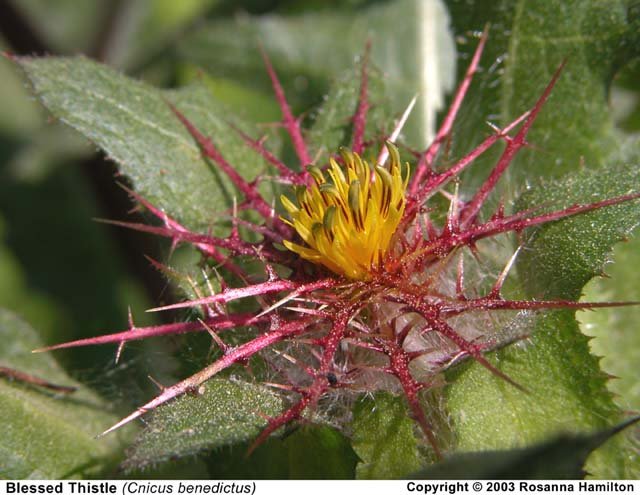 Despite the fact that Holy Thistle was once feted for its medicinal actions, its properties these days are hardly known and it is a very under-used plant – certainly not a ‘noxious weed’.

It is recommended for use by public health nurses in Ontario, Canada, as well as by the Canadian Breastfeeding Foundation along with fenugreek to increase lactation in nursing mothers. It is also a component in some bitters formulas.

The roots of the blessed thistle is used by Algerian locals to heal burns and wounds. We have provided the full paper for reference but to quote the paper here

The pharmacological activity of Cnicus benedictus L. showed a high level of wound healing activity, …When root powder mixture was applied to rat wounds during a study, the powder proved more effective in healing the wounds than in natural time.

The whole herb is used medicinally. The leaves and flowering tops are collected in July, just as the plant breaks into flower, and cut on a dry day, 'the best time being about noon, when there is no longer any trace of dew on them'. About 3 1/2 tons of fresh herb produce 1 ton when dried, and about 35 cwt. of dry herb can be raised per acre.

The analysis available in Dr Duke’s plant database show the following main constituents.  We have excluded constituents which Dr Duke lists, but which he states have no activity.

Some of the rather interesting activities reported include anti-bacterial and anti-viral activity of various sorts and some anti-parasitic activity.  The small amount of aluminium as well as the Benzoic acid in the specimen that Dr Duke tested acts as an anti-fungal agent.  Benzoic acid is also Anaesthetic; Antiseptic; Antiyeast; a Fungicide; and a Vulnerary.

It is also worth noting that Arctigenin has anti-HIV properties as well as antileukemic properties.  Arctiin appears to have diuretic and ‘narcotic’ properties.