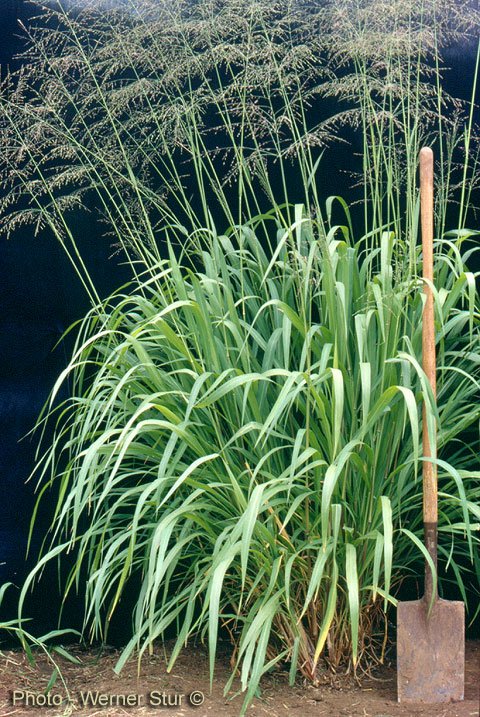 Megathyrsus maximus, known as Guinea grass and green panic grass in English, , is a large perennial bunch grass.  It is also known by the botanical names

Until 2003, it was named Urochloa maxima. It was then moved to the genus Megathyrsus, and renamed.

This grass has no medicinal value at all, but we have placed a description of it here, to show how the introduction of alien species into environments for which they were not designed, cause illness by a series of knock-on effects.

The 'medicine' is thus not to introduce alien species without understanding the chemical composition or attributes of the plant or species you are about to introduce.

Guinea grass is native to Africa, Palestine, and Yemen, but it has been introduced in the tropics around the world.  In some places, such as Sri Lanka and Hawai'i, it is considered and has become an invasive weed that suppresses or displaces local native plants and is a fire hazard.

In yet other countries, it has been introduced as a long-term foraging grass.  The grass is used for ‘cut-and-carry’, a practice in which grass is harvested and brought to a ruminant animal in an enclosed system. Shade tolerance makes it suited to coexist with trees in ‘agroforestry’. Some varieties have been used for making silage and hay. In the Australian state of Queensland, the Queensland Acclimatisation Society introduced Guinea grass to 22 locations between 1865 and 1869.  It has not been without its repercussions.

P. maximum spreads along water courses and ungrazed roadsides, and has been listed as a weed in many countries.  It is a very effective coloniser in ungrazed areas, particularly where some form of soil disturbance has occurred.   It is a major weed in sugar-cane fields, due to its ability to grow under shaded conditions. 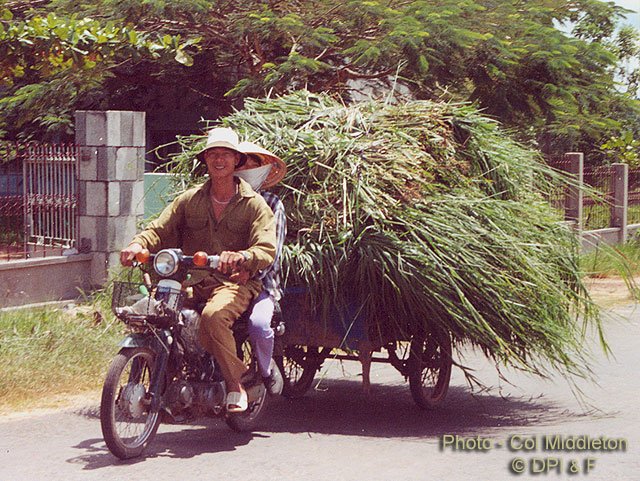 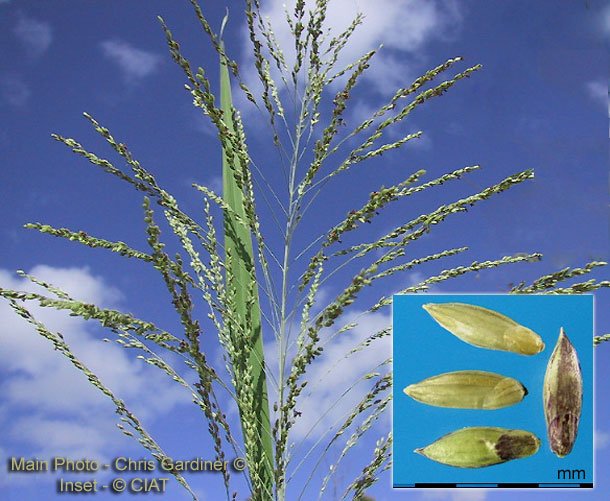 Megathyrsus maximus grows naturally in open grasslands, usually under or near trees and shrubs and along riverbanks.

It can withstand wildfire and drought.

Panicles are open, with as many as 9000 seeds per plant.

Guineau grass is a target of  Ergot (Claviceps spp.), and other fungal diseases, that can cause ergotism in humans.  This is a serious disease and one which can affect those who breathe in the fungus whilst gathering it. 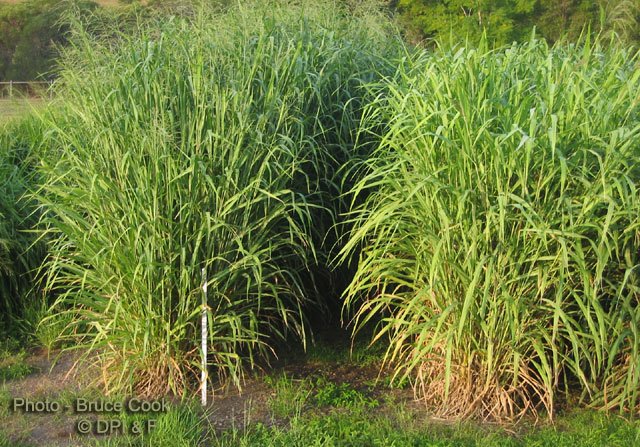 P. maximum is eaten by all classes of grazing livestock, with particularly high intakes of young leafy growth.

In South Africa, it is suspected of causing "dikoor" in sheep, a photosensitisation disease, perhaps linked to fungal infection.

The plant is also said to cause fatal colic if eaten too wet or in excess.  The variety 'Petrie' has been implicated in hyperparathyroidism ('big head') in horses.

Oxalate is the generic name given to salts of oxalic acid, for example sodium oxalate Na2C2O4, or dimethyl oxalate ((CH3)2C2O4).   Many metal ions form insoluble precipitates with oxalate, a prominent example being calcium oxalate, the primary constituent of the most common kind of kidney stones.

In the body, oxalic acid combines with divalent metallic cations such as calcium (Ca2+) and iron(II) (Fe2+) or Magnesium (Mg2+), to form crystals of the corresponding oxalates which are then excreted in urine as minute crystals. In other words, oxalates in excess leach out essential minerals from the body.

Guineau grass has been found to cause nephrosis or hypocalcaemia in ruminants, due to the oxalates.

So, the grass can cause ergotism, hypocalcaemia, hyperparathyroidism, nephrosis, fatal colic, and dikoor.  Here is Dr Duke's analysis

So it is also poisonous and used as a poison - not a food for animals.

Guineau grass contains HCN - Hydrogen cyanide (HCN), sometimes called prussic acid, an organic compound with the chemical formula HCN.  It is found in the leaf of Guinea grass.  Hydrogen cyanide is contained in the exhaust of vehicles, in tobacco and wood smoke, and in smoke from burning nitrogen-containing plastics.  It is toxic if inhaled and toxic if ingested.  Thus any fires where this plant is involved would cause toxic smoke.

Atrazine is now being used for weed control in P. maximum at 4 L/ha.  And Atrazine causes cancer.  In other words, our introduction of a plant to a non native environment has resulted in it being an uncontrollable  weed and one which we now have to control using cancer causing chemicals.

Atrazine is a triazine herbicide used widely in the United States. Although it is an animal carcinogen, the mechanism in rodents does not appear [sic] to operate in humans. Few epidemiologic studies have provided evidence for an association….. This Agricultural Health Study (AHS) is a prospective cohort that includes 57,310 licensed pesticide applicators. In this report, we extend a previous AHS analysis of cancer risk associated with self-reported atrazine use with six additional years of follow-up and more than twice as many cancer cases. ……….Overall, 36,357 (68%) of applicators reported using atrazine, among whom there were 3,146 cancer cases. ………… Based on 29 exposed cases of thyroid cancer, there was a statistically significant risk in the second and fourth quartiles of intensity-weighted lifetime days. PMID:  21622085

Incidentally, the researchers appeared to believe this was not statistically significant. 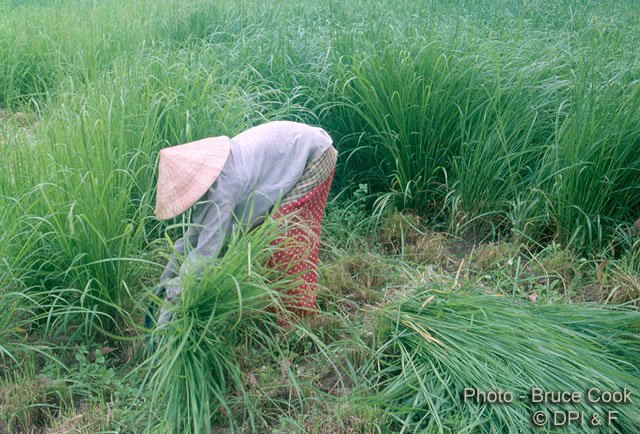