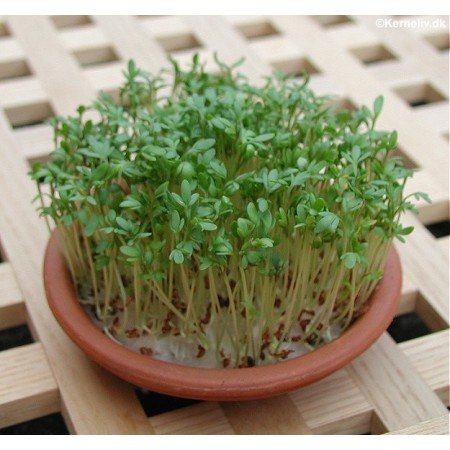 Cress (Lepidium sativum), sometimes referred to as garden cress to distinguish it from similar plants also referred to as cress (from old Germanic cresso which means sharp, spicy), is a fast-growing, edible herb. 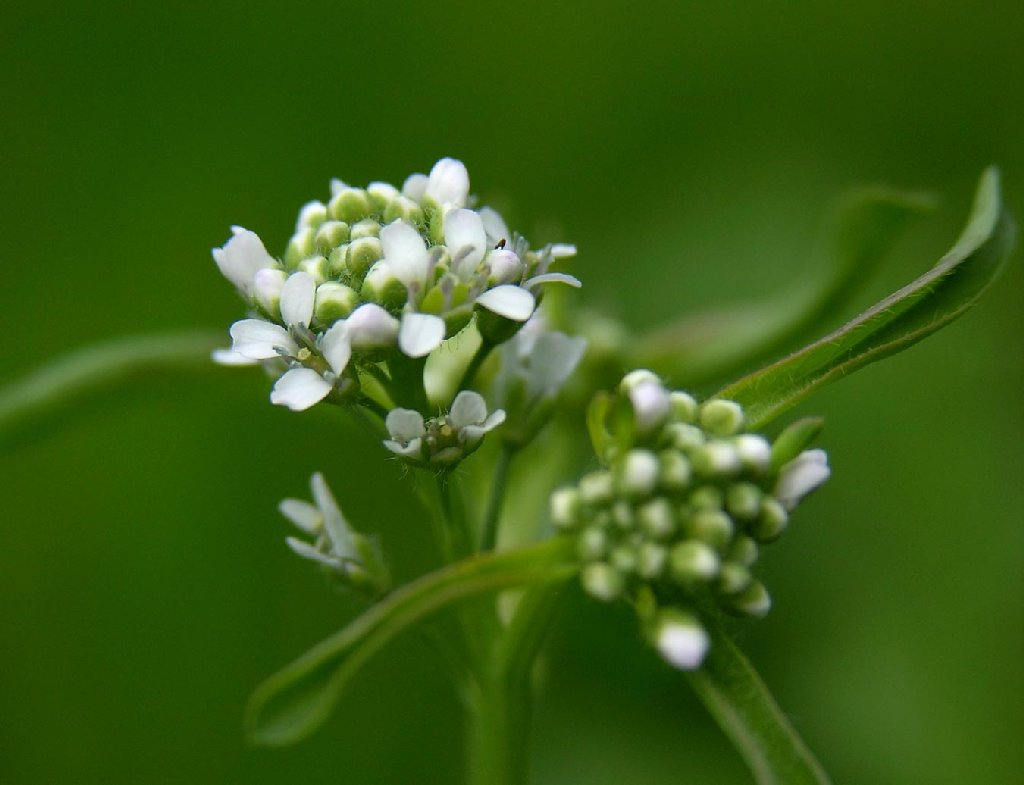 Lepidium sativum is an annual.  It is hardy to zone (UK) 7. It is in flower from June to July, and the seeds ripen from July to August.

The flowers are hermaphrodite (have both male and female organs) and are pollinated by Insects.

If left to grow, this annual plant can reach a height of 60 cm (~24 inches), with many branches on the upper part. The white to pinkish flowers are only 2 mm (1/12 of an inch) across, clustered in branched racemes.  Most people, however, have never seen cress in this state as it is eaten raw much like sprouted seed is.

The origin of Garden cress is unknown, PFAF suggest Iran.  These days, it is commercially grown in England, France, the Netherlands and Scandinavia. 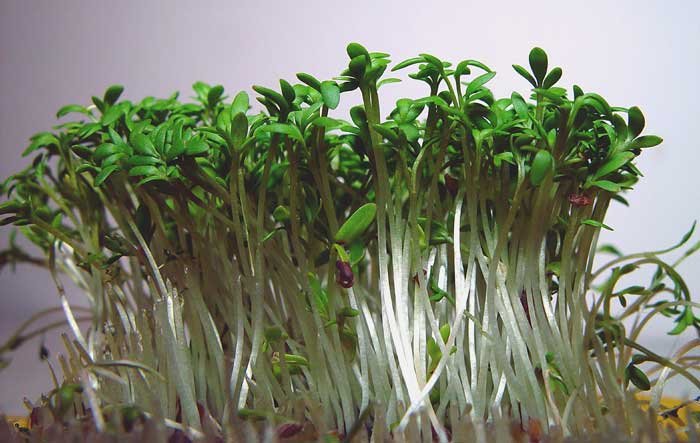 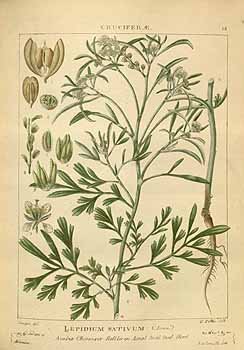 Cultivation of garden cress is practical both on mass scales and on the individual scale.

Garden cress is suitable for hydroponic cultivation and thrives in slightly alkaline water. In many local markets, the demand for hydroponically grown cress can exceed available supply, partially because cress leaves are not suitable for distribution in dried form, so they can only be partially preserved. Consumers commonly acquire cress as seeds or (in Europe) from markets as boxes of young live shoots.

Edible shoots are typically harvested in one to two weeks after planting, when they are 5–13 cm (2 - 5 inches) tall.

Cress is very easily grown at home from seed.  A damp flannel is all that is needed as a growing base.  The seed is best kept warm and the flannel must not be left to dry out.  We used to grow cress in the airing cupboard as children.  It was once a favourite children’s task – to grow the mustard and cress for their sandwiches or for the salad used in Sunday tea.

Garden cress, known as chandrashoor, and the seeds, known as halloon in India, are commonly used in the system of Ayurvedic medicine. According to Plants for a Future, whose source was the one shown

Chopra. R. N., Nayar. S. L. and Chopra. I. C. Glossary of Indian Medicinal Plants (Including the Supplement)
The leaves are antiscorbutic, diuretic and stimulant. The plant is administered in cases of asthma, cough with expectoration and bleeding piles. The root is used in the treatment of secondary syphilis and tenesmus. The seeds are galactogogue. They have been boiled with milk and used to procure an abortion, they have been applied as a poultice to pains and hurts and have also been used as an aperient. 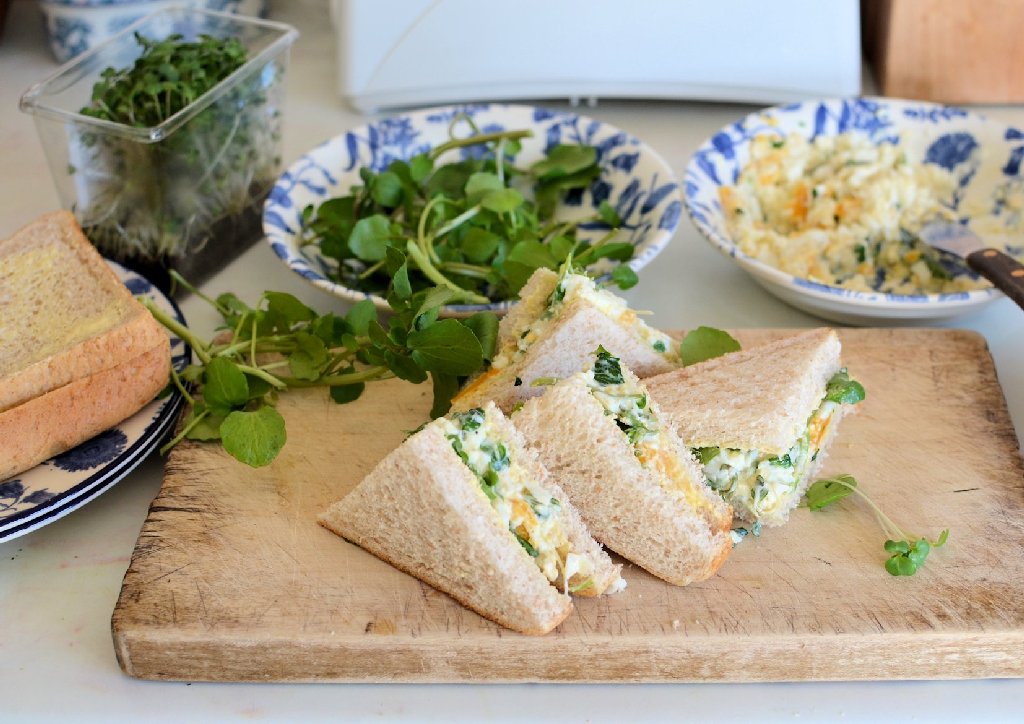 Garden cress can be added to soups, sandwiches and salads for its tangy flavour.  In England, cut cress shoots are commonly used in sandwiches with boiled eggs, mayonnaise and salt.

It is frequently used as a garnish to add a touch of pepperiness to a dish in a decorative way. 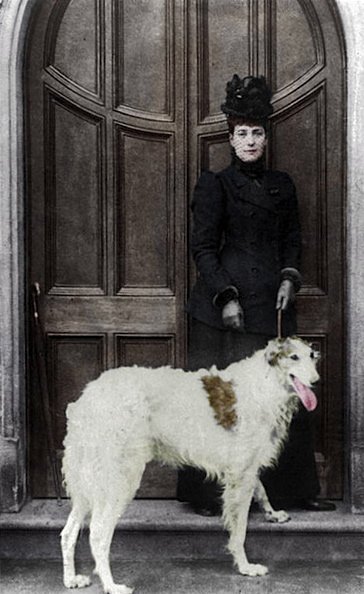 Queen Alexandra's Sandwiches are a meal in themselves, it is described as a "classic Edwardian sandwiches with a savoury taste."Perhaps the most intriguing aspect of these is that they were looked on as a mid afternoon snack to keep you going between lunch and dinner!

First, make a mustard butter. This is just unsalted butter (left at room temperature), mixed with a mild French Mustard (say, Dijon), and lemon juice. Spread the sandwich loaf slices with the mustard butter. Next, lay thin slices of tongue onto the buttered bread.

The filling's made from chicken and mayonnaise. Poach some chicken breasts until cooked, and then mince them up. Bind them in home-made mayonnaise, and flavour it with a few drops of Tabasco sauce.

Sprinkle with a new layer of mustard and cress and season with sea salt and black pepper. As before, top off with another layer of white bread, remove the crusts carefully, and cut into fingers.

This is very good with poached salmon 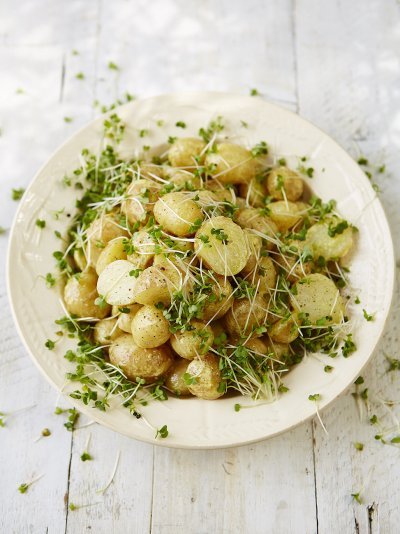