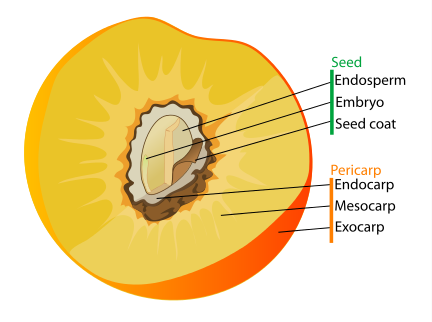 In botany, a drupe is a fruit with a stone, in which an outer fleshy part (exocarp, or skin; and mesocarp, or flesh) surrounds a shell (the pit, stone, or pyrene) of hardened endocarp with a seed (kernel) inside.

The term can be a bit confusing because it includes plants that everyone would readily recognise as being a fruit with a stone, - such as peaches or plums, but also quite a number that are still technically fruits with a stone but are savoury – such as the avocado and in some cases have flesh we would not eat but an inner kernel that we do – like the walnut.

In botanical terms the definition of the drupe is very precise:

The definitive characteristic of a drupe is that the hard, "lignified" stone (or pit) is derived from the ovary wall of the flower.  Other fleshy fruits may have a stony enclosure that comes from the seed coat surrounding the seed, but such fruits are not drupes. 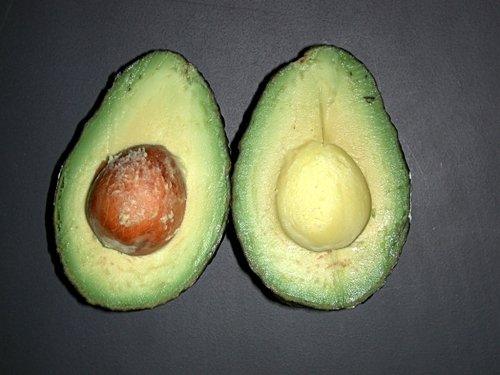 But this narrowing down of the definition, though clearly important botanically, does not help nutritionally, thus the slightly more general definition has been used on the site.

The reason for grouping drupes is so that some more generic properties of this class of plants can be described and it enables us to provide a placeholder for any very general observations regarding drupes as a whole.

The function of drupes

In general, plants that wish to guarantee their survival and are annuals or short lived perennials tend to use simple small seeds, because seed is easily scattered from the plant and being small enters the ground relatively easily.  It only takes a few disturbances from animals and the seed is buried and the plant's existence is ensured.  In this case the seed is given all the nutrients it needs to survive but not much more.  It is not made attractive to birds unless the seed can survive the bird's digestive system.

But larger plants and perennials use a different strategy.  In some cases they use berries and we have an entry for berries on the site.  Berries usually contain multiple seeds, but surrounded by a nutritious outer layer that will attract foragers. 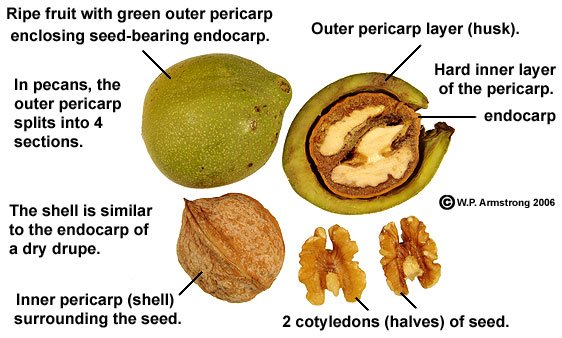 The Pecan as drupe

The drupe is an extension of this strategy where there is only one stone with one or a very small number of seeds inside.  Many so called ‘nuts’ are actually drupes.

From the plant's point of view a drupe is its means to spread its seed – broadcast its progeny.  Many plants producing drupes are long-lasting bushes or trees and thus their existence is not in danger, they can survive many years without ever producing progeny.

For a bush or tree the main objective is to make sure any seed is taken away from the plant so that it does not end up being a competitor for the nutrients and the space where the plant is.  A plant cannot up roots and move away from competition, all it can do is make sure the competition is either deterred or is not its own progeny.

Many drupes, with their sweet, fleshy outer layer, attract the attention of animals as a food, and the plant population benefits from the resulting dispersal of its seeds. The endocarp (pit or stone) is sometimes dropped after the fleshy part is eaten, but even when it is dropped it is often some way away from the tree or bush itself.  Where it is swallowed, the hard outer layer ensures it passes through the digestive tract unharmed, and is returned to the soil in faeces with the seed inside unharmed. This passage through the digestive tract can reduce the thickness of the endocarp, and thus can aid in germination rates. The process being known as scarification. 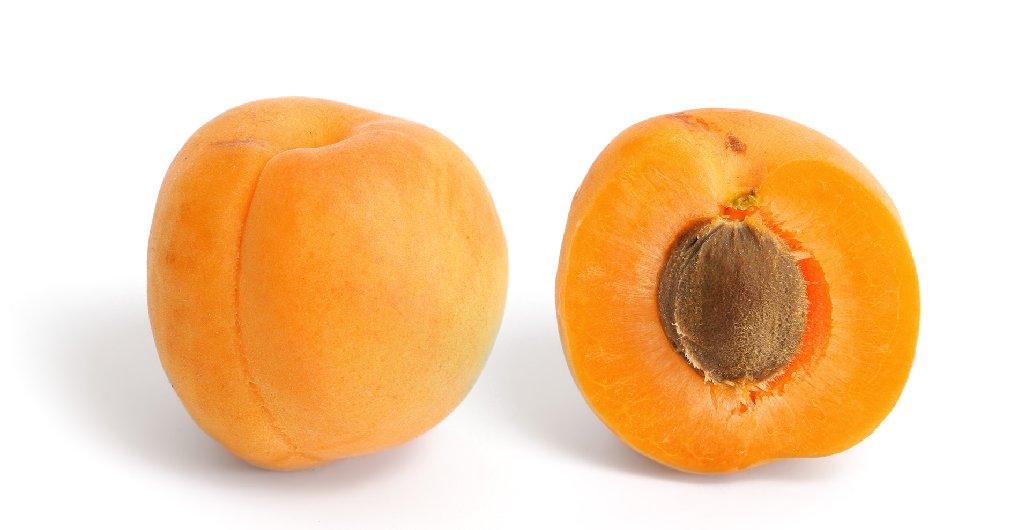 The berry strategy and the drupe strategy are thus very similar, the main variant is the size of the seed/stone.  The size difference attracts different foragers and thus evens out the distribution of food for different size animals and birds.

Just like berries, the drupes are often sweet and thus attractive to a wide range of foragers - animals and birds.  Usually they are only sweet when the seed inside is viable, they may even be poisonous when not ripe to make sure predators are put off eating unripe fruit.

The fruit is also usually highly nutritious, encouraging foragers to eat it knowing that they are getting minerals, vitamins and amino acids in abundance.  Thus the difference between a drupe and a berry is actually almost non existent. 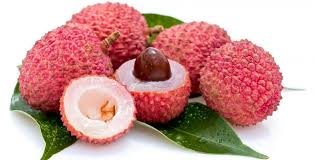 Many of the plants producing drupes also lace the drupes with anti-virals, anti-bacterials and anti-fungals, often in great abundance.  In a sense this is a sort of symbiotic relationship of superb design.
'If you eat my fruit then move away from me to a different part of the countryside and poo over there, you have guaranteed the safe transit of my offspring.  I will, in turn help you by keeping you well nourished and free of pathogens'.

A good deal if ever there was one.

From the plant’s point of view, however, the appearance of clever apes and human beings who learnt how to crack open the hard outer shell and extract the seeds [chimpanzees know how to crack nuts], was something of a threat to the plants’ existence.  Nuts are simply large seeds and the plants do not benefit from having their seeds eaten. This may be why we are not awash with walnut trees.

In one of the more fascinating stages in evolutionary biology, some members of the Prunus family lace their nuts/seeds with small amounts of a cyanide like chemical to ensure that the seed is not eaten.  Amygdalin is a poisonous cyanogenic glycoside found in many plants, but most notably in the seeds (kernels) of apricot, peach, bitter almond, and plum. 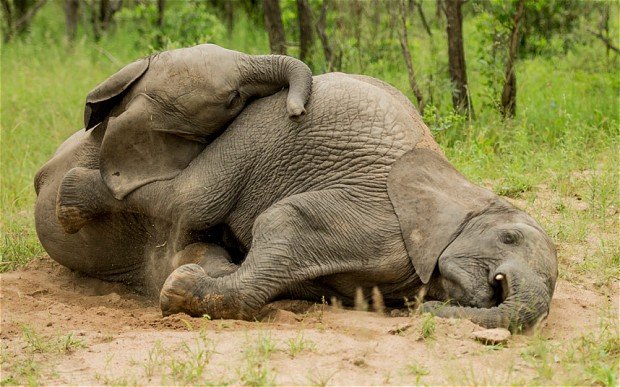 All members of the genus Prunus are drupes.  Some plants that produce drupes are shown below, some may not be on the site yet.  Where they are a link has been provided so that the specific nutrient content and activity of each plant can be seen.  The drupes that we eat for their seeds have been placed within the category nuts, as nutritionally they are different: 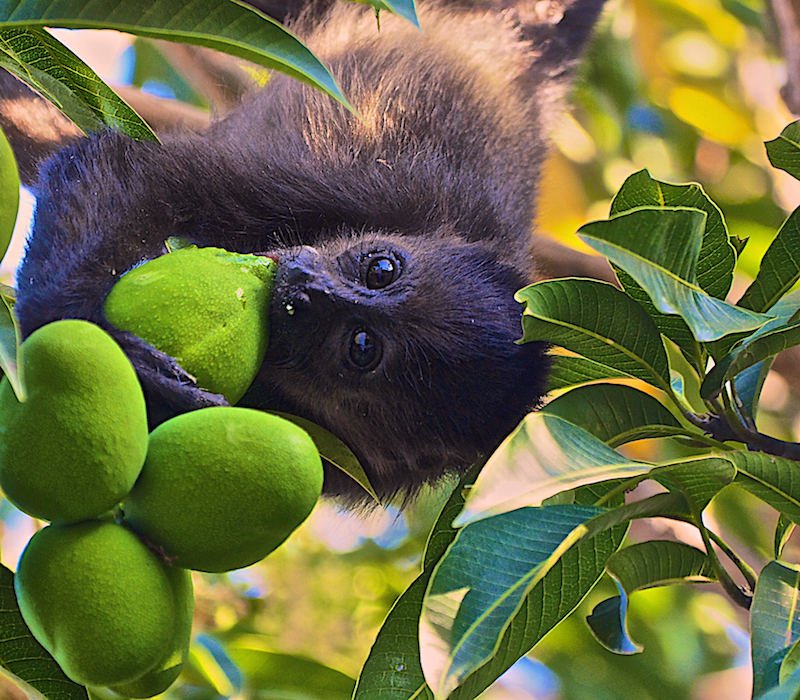 'Clingstone' refers to a drupe having a stone which cannot easily be removed from the flesh. The flesh is attached strongly to the stone and must be cut to free the stone. Clingstone varieties of fruits in the genus Prunus are “preferred as table fruit and for jams, because the flesh of clingstone fruits tends to be more tender and juicy throughout”.