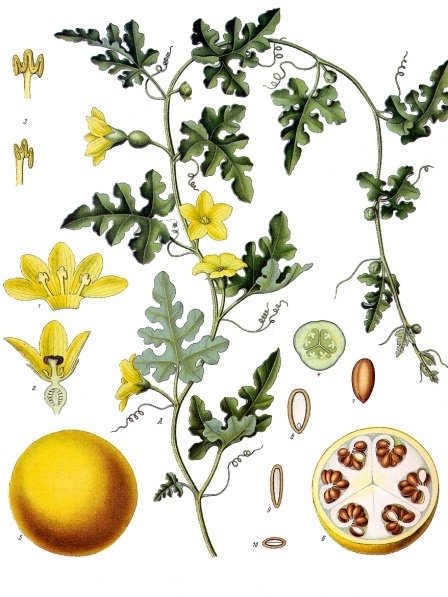 Citrullus colocynthis, with many common names including colocynth, bitter apple, bitter cucumber, desert gourd, egusi, vine of Sodom, or wild gourd, is a desert  plant native to the Mediterranean Basin and Asia, especially Turkey (especially in regions such as İzmir), Nubia, and Trieste.

It resembles a common watermelon vine, but bears small, hard fruits with a bitter pulp. It originally bore the scientific name Colocynthis citrullus.

The roots are large, fleshy, and perennial, leading to a high survival rate due to the long tap root. The vine-like stems spread in all directions for a few meters looking for something over which to climb. If present, shrubs and herbs are preferred and climbed by means of axiliary branching tendrils.

The leaves are very similar to watermelon, being palmate and angular with three to seven divided lobes.

The flowers are yellow and solitary in the axes of leaves and are borne by yellow-greenish peduncles. Each has a subcampanulated five-lobed corolla and a five-parted calyx. They are monoecious, so the male (stamens) and the female reproductive parts (pistils and ovary) are borne in different flowers on the same plant. The male flowers’ calyx is shorter than the corolla.

The fruit is smooth, spheric with a 5– to 10-cm-diameter and extremely bitter taste. The calyx englobe the yellow-green fruit which becomes marble (yellow stripes) at maturity. The mesocarp is filled with a soft, dry, and spongy white pulp, in which the seeds are embedded. Each of the three carpels bears six seeds. Each plant produces 15 to 30 fruits. 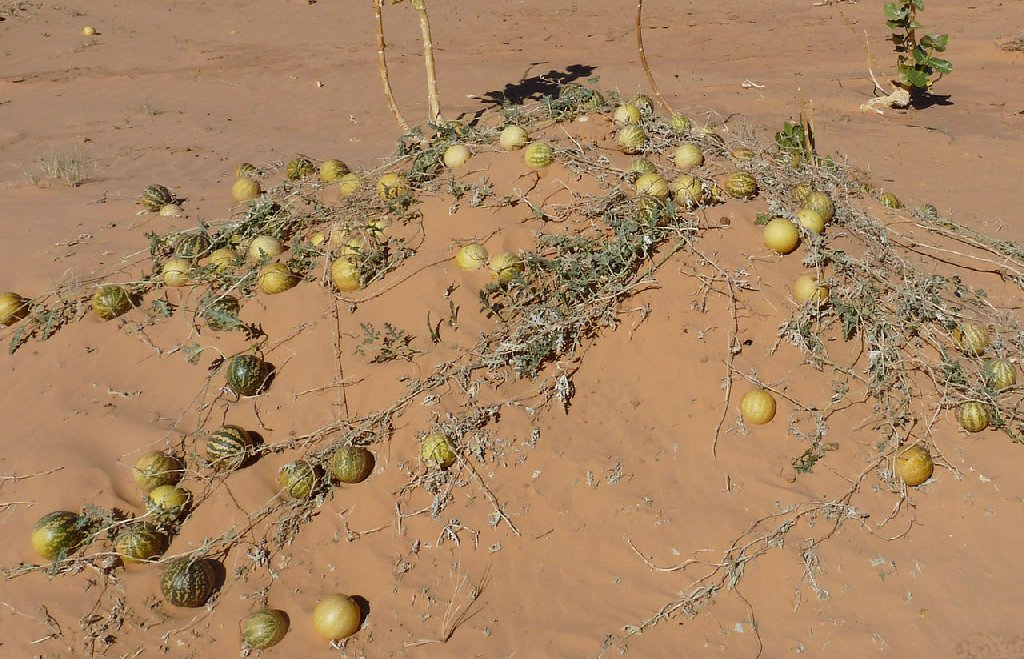 C. colocynthis  grows in sandy, arid soils. It is an annual or a perennial plant (in the wild) in Indian arid zones and has a great survival rate under extreme conditions.  It can tolerate annual precipitation of 250 to 1500 mm and an annual temperature of 14.8 to 27.8 °C. It grows from sea level up to 1500 meters above sea level on sandy loam, subdesert soils, and sandy sea coasts with a pH range between 5.0 and 7.8.

Colocynth is native to the Mediterranean Basin and Asia, and is distributed among the west coast of northern Africa, eastward through the Sahara, Egypt until India, and reaches also the north coast of the Mediterranean and the Caspian Seas. It grows also in southern European countries as in Spain and on the islands of the Grecian archipelago. On the island of Cyprus, it is cultivated on a small scale; it has been an income source since the 14th century and is still exported today. 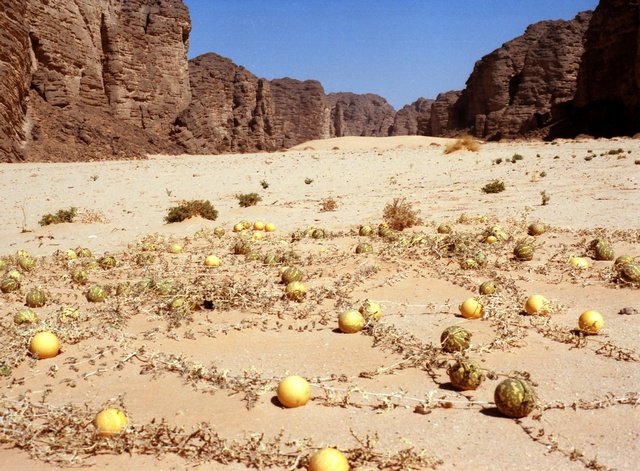 The detail of the chemicals present in Colocynth according to Dr Duke's Phytochemical database is shown below, but here we present a summary of this activity.

If you glance through the chemicals present in Colocynth, it should be clear that the plant and its petiole [The Petiole in botany is the stalk of a leaf, attaching the blade to the stem] are not something one would ever ingest.  I have highlighted in RED some of  the reasons why.

But for EXTERNAL use the plant is interesting as it appears to have very extensive anti-parasitic and insecticidal activity and one of the parasites it can target is the one causing Trichomoniasis.  Marked in BLUE on the list below. There is also an activity, which is easy to miss, against trypanosomatids, shown in Orange , which cause :

A desert plant by definition is likely to be one that has to put up sterling defences against insects eating it, so one would expect to see high levels of insecticidal activity, it is interesting that it also has specific parasitic activity. Another activity which should be of great interest is that against Mosquitos, shown in Purple.

As it contains Limonene it also has ozone scavenging activity, so might be a useful plant to use in heavily polluted areas as a chelator of the air.

Inhaling herbal infusions of the plant without ingestion might also be useful if one is in pain or overwrought, as many of the chemicals have a sedative, anaesthetic and narcotic action.  As the plant has antiviral activity it may help if inhaled with viruses that attack the lungs.

At one time the plant – at least a careful concoction of fruit and plant, was used for tooth problems.  We have an observation for this.  The plant does have several activities related to tooth and mouth problems, but one would have to be extremely careful how one used the concoction not to swallow it. 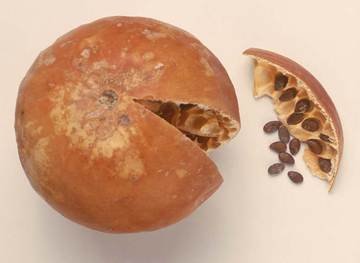 Colocynth also has some quite interesting activity in its fruit.  It has very extensive antiviral and antibacterial activity, with activity against some very key viruses such as the adenoviruses, herpes, vaccinia viruses, hepatitis, HIV [shown in Turquoise] and EBV.  You would need to ensure the plant was not growing in a polluted site as it is a metal chelator [shown in yellow] meaning it could pick up heavy metals in the fruit, grown in a clean site it could chelate you.

Another fascinating aspect of the fruit is its activity on our reproductive system, shown in green.  For more details on how this works in plants see the sections - estrogen, androgen and progesterone.  After this you will be able to read the section on Phytoestrogens, which is what this plant contains, with more understanding.

The seed is something of a conundrum.  It is not totally without its problems.  The plant appears to want to encourage animals that will eat the fruit whole and disperse its seeds, not grind them up for oil or food as there are some unwanted activities in the seed, despite the presence of some important nutrients for us.  Go to Dr Duke's site for more details. 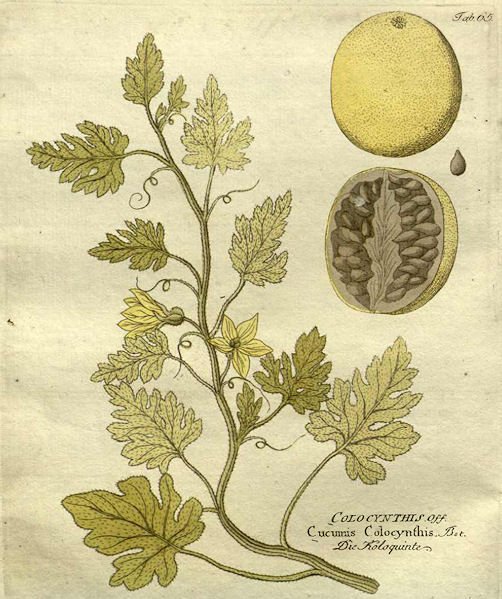 The following extract from Dr. Duke's Phytochemical and Ethnobotanical Databases, lists the Chemicals and their Biological Activities in: Citrullus colocynthis (Cucurbitaceae) -- Colocynth

In order to help we have grouped the chemicals by the part of the plant they refer to, this makes it easier to see which parts of the plant do what.