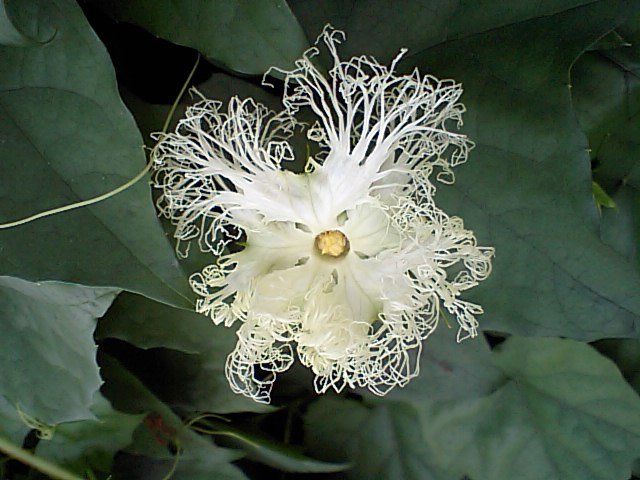 Trichosanthes kirilowii is a flowering plant in the family Cucurbitaceae found particularly in Henan, Shandong, Hebei, Shanxi, and Shaanxi.

It is one of the 50 fundamental herbs used in traditional Chinese medicine, where it shares the name guālóu (Chinese: 栝楼) with the related T. rosthornii. It is known as Chinese cucumber in English. And Chinese snake gourd.

The tuber of this plant is known in Mandarin as tiān huā fěn (Chinese: 天花粉).  In traditional Chinese medicine it is said to
"drain heat and generate fluids, clear and drain lung heat, transform phlegm, and moisten lung dryness, and resolve toxicity and expel pus." 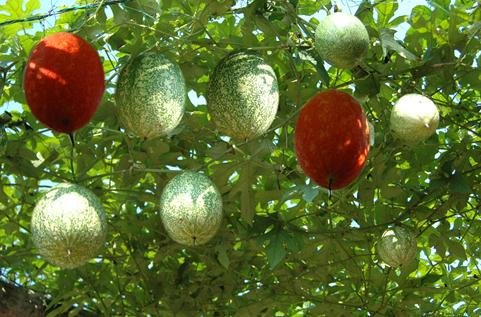 The fruit of the plant, also referred to in Mandarin as guālóu (Chinese: 瓜蔞), is said to
"clear heat and transform phlegm-heat, unbind the chest, reduces abscesses and dissipate nodules."

Wikipedi is a little less poetical in its explanation "This plant can be used to  dissolve the protein coat on the RNA of the AIDS virus."  The plant is a source of the anti-HIV type I ribosome-inactiving lectin trichosanthin.