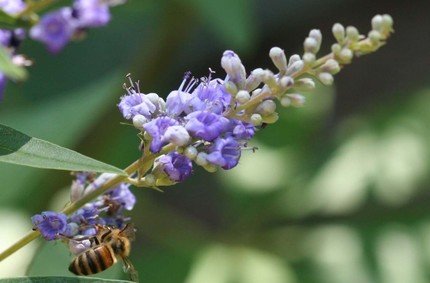 It is one of the few temperate-zone species of Vitex, which is on the whole a genus of tropical and sub-tropical flowering plants.

Theophrastus mentioned the shrub several times, as agnos (άγνος) in Enquiry into Plants. Vitex, its name in Pliny the Elder, is derived from the Latin vieo, meaning to weave or to tie up, a reference to the use of Vitex agnus-castus in basketry. Its macaronic specific name repeats "chaste" in both Greek and Latin, and considered to be sacred to the goddess Hestia/Vesta.

As Wikipedia says “It has been long believed to be an anaphrodisiac but its effectiveness remains controversial”.  Not that controversial because it is a known phytoestrogen.

I miss the lilacs I grew up with in Illinois--miss their distinctive fragrance and their lovely purple flowers. Our climate here is too hot for lilacs, but we have a plant that is just as beautiful (although not as fragrant): the chaste tree,Vitex agnus-castus. It's blooming right now, and the hummingbirds, butterflies, and bees are ecstatic. Every blossom cluster seems to have its own personal pollinator, and often more than one. 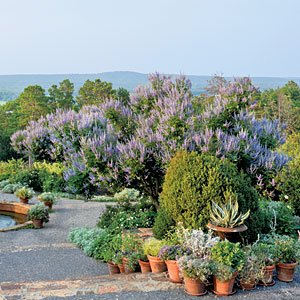 The common name, chaste tree, comes from the traditional belief that the plant (leaves, twigs, and seeds) is an anaphrodisiac: it has the ability to inhibit sexual desire. According to the Roman historian Pliny, Roman matrons celebrated ritual chastity by strewing their beds with Vitexleaves (a bit itchy, maybe?). The spicy berries are often called Monks' pepper: they were used in monastic cookery to flavor stews and soups (something I learned from a Brother Cadfael mystery--Book 5, I think it was: thank you, Ellis Peters!) and to help the monks preserve their vows of chastity. The berries have also been used in traditional medicines to promote reproductive health, and some modern research supports its use as a treatment for PMS.