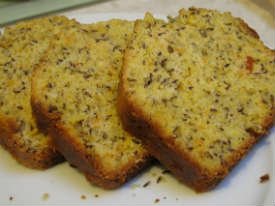 The plant is similar in appearance to other members of the carrot family, with finely divided, feathery leaves. Caraway fruits (erroneously called seeds) are crescent-shaped and around 2 mm long, with five pale ridges.

Caraway has a long tradition of medical uses, primarily for stomach complaints. Emerging and ongoing research from Arabic regional studies suggest its use 'as an endocrine function support agent, specifically related to thyroid disorders and auto immune diseases'. 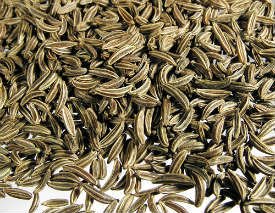 The table shows some of the mineral and vitamin content of caraway.  It appears to be a particulalry good source of potassium. 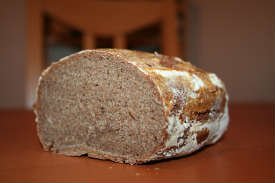 Caraway is a very versatile spice. The fruits, usually used whole, have a pungent, anise-like flavor and aroma that comes from essential oils. They are used as a spice in breads, especially rye bread, but can also be used in desserts, cakes, liquors, casseroles, curries and other Indian dishes. Caraway is extensively used in Indian Cuisine and can be used in rice dishes like Pulaos and Biryani. It is also added to sauerkraut.

My Aunty Lorna used to make delicious 'seedy cake' as she called it, caraway seed cake. In Serbia, it is commonly sprinkled over home-made salty scones (pogačice s kimom).

It is also used to add flavor to cheeses such as bondost, pultost and havarti. Akvavit and several liqueurs are made with caraway. In Middle Eastern cuisine, caraway pudding is a popular dessert during Ramadan.