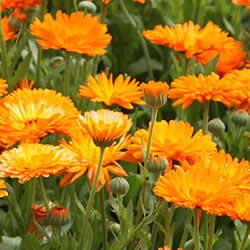 Calendula is a genus of about 15–20 species of annual and perennial herbaceous plants in the daisy family Asteraceae. They are native to southwestern Asia, western Europe, Macaronesia, and the Mediterranean.

They are rather confusingly called Marigold, a name they share with the species Tagetes, but to avoid confusion I have kept to their botanical name, which is a modern Latin diminutive of calendae, meaning "little calendar" or  "little clock". The Species includes:

The properties of each member of the species are not the same, thus you do need to know your plants.  The most commonly cultivated and used member of the genus is Calendula officinalis. Many herbal and cosmetic products which name the ingredient as  'calendula' invariably derive from C. officinalis.

Calendula species can be used in medicine and in cooking.

C. officinalis extracts are used as an anti-inflammatory, an antitumor agent, and a remedy for healing wounds in a number of medical systems.  Calendula in suspension or in tincture is used topically for treating acne, reducing inflammation, controlling bleeding, and soothing irritated tissue.  “Limited evidence indicates Calendula cream or ointment is effective in treating radiation dermatitis.”

In some of the earliest medical writings, calendula was recommended for treating ailments of the digestive tract. It was used to ‘detoxify the liver and gall bladder’. The flowers were applied to cuts and wounds to stop bleeding, prevent infection and speed healing. Calendula was also used for various women's ailments, and to treat a number of skin conditions. During the American Civil War, calendula flowers were used on the battlefields in open wounds as antihemorrhagic and antiseptic, and they were used in dressing wounds to promote healing. Calendula was also used in this way during World War I.

BUT Calendula plants are known to cause allergic reactions, in some people, so care has to be exercised.

If you would like to use calendula as a food, it is worth knowing that Calendula species have been used in cooking for centuries. The flowers were a common ingredient in German soups and stews, which explains the nickname "pot marigold". The dried petals were also used to add colour to butter and cheese or as a replacement for saffron. The flowers are traditional ingredients in both Mediterranean and Middle Eastern dishes, as well as in Calendula tea.  The petals are edible raw and can be used fresh in salads.

This site provides a great deal more useful information on Calendula and has some wonderful pictures of the plant.