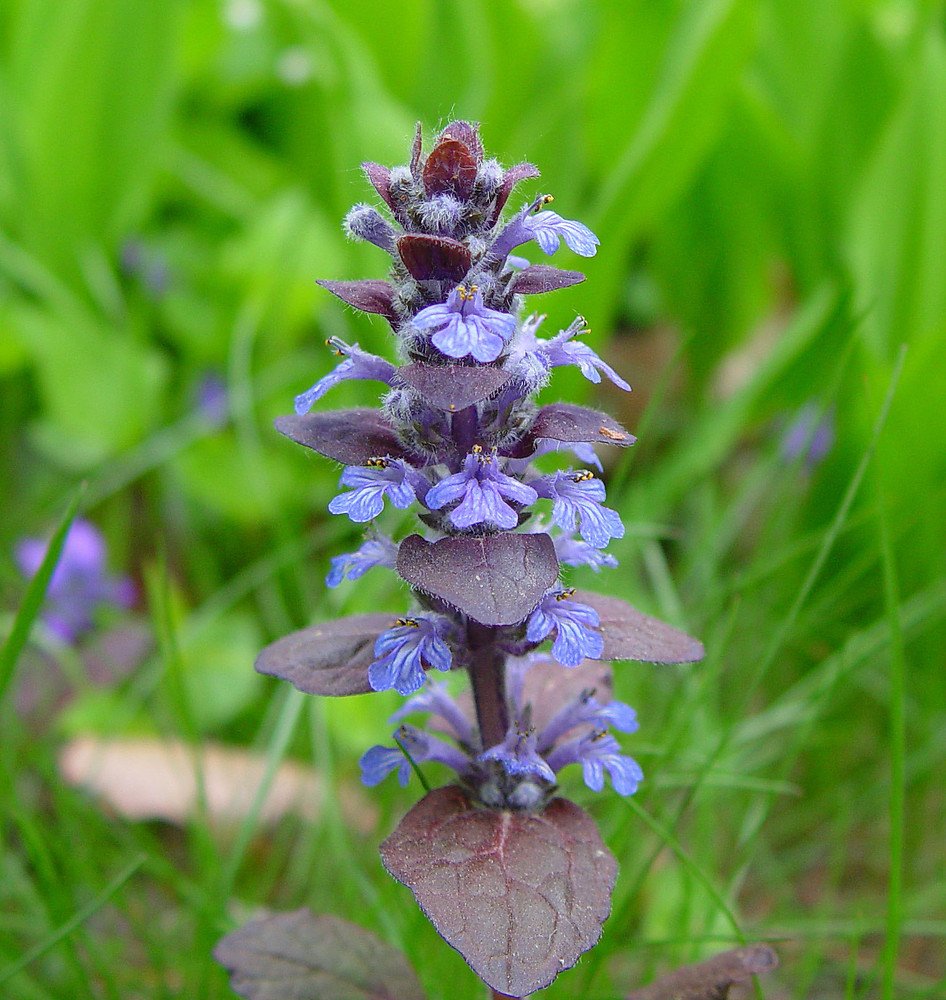 Ajuga reptans is commonly known as bugle, blue bugle, bugleherb, bugleweed, carpetweed, carpet bungleweed, and common bugle.  The early writers speak of the plant as the Abija, Ajuga, Abuga and Bugula, and the common English name, Bugle, is probably a corruption of one or other of these forms.

It is an attractive herbaceous flowering plant,  often grown as a garden plant, where it provides useful groundcover. Numerous cultivars have been selected, of which "Caitlin's Giant" has gained the Royal Horticultural Society's Award of Garden Merit.

Ajuga reptans is also a component of Purple moor grass and rush pastures, a Biodiversity Action Plan habitat in the United Kingdom.

Ajuga reptans, is native to Europe, but has become invasive in parts of North America. 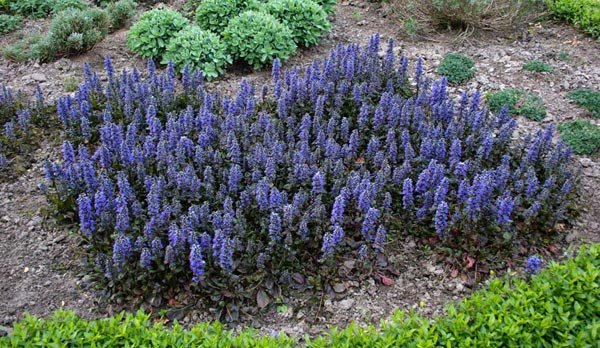 Ajuga reptans is a spreading ground cover plant that grows in a dense mat. The plant has runners that spread across the surface of the ground.

The plant has dark green leaves with purple highlights. The stalked leaves are in opposite pairs. The leaf blades are hairless and are elliptical or ovate with a rounded tip and shallowly rounded teeth on the margin. The leaves grow 5–8 cm (2.0–3.1 in) high. 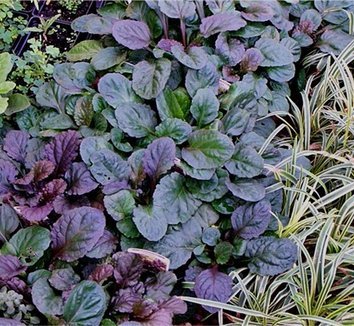 In the spring, the plant sends up 10–15 cm (3.9–5.9 in) tall flower stalks with many purple flowers on them. The flowers are frequently visited by flies, such as Rhingia campestris, but the flowers are actually adapted by their lipped formation for cross-fertilization by bees, a little nectar being found at the base of the long tube of the corolla. The upper lip is very short and the lower three-cleft. The stamens project, though the flowers have practically no scent.   The stems are squarish with hairs on two sides.

The inflorescence forms a dense raceme and is composed of whorls of blue flowers, each with dark veins on the lower lip. The calyx has five toothed lobes and the corolla forms a two-lipped flower about 14 to 17 mm (0.6 to 0.7 in) long with a short tube. The upper lip of each flower is short and flat with a smooth edge and the lower lip is three-lobed, the central lobe being the largest, flat with a notched tip. There are four stamens, two long and two short, which are longer than the corolla and are attached to the tube. The ovary is superior and the fruit is a schizocarp with four chambers. 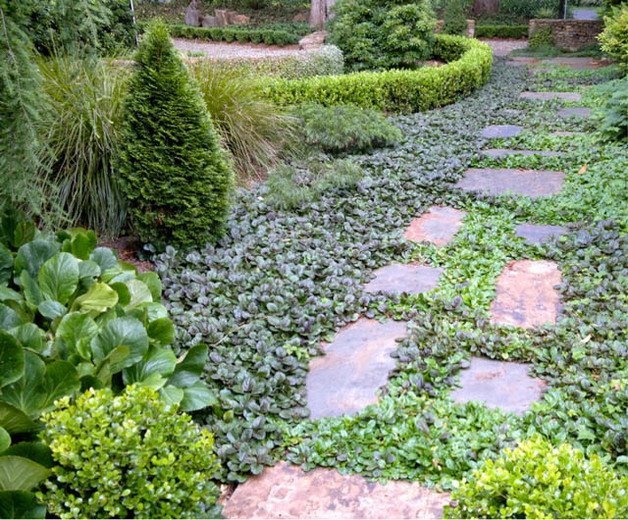 The Bugle and the Self-Heal are closely related plants, both have two-lipped corollas, and both belong to the important order medicinally of Labiatae, and both for many centuries stood in equally high estimation as valuable vulneraries or wound herbs.

The name, according to Mrs Grieve is probably corrupted from Abija, which in turn derived from the Latin word abigo, to drive away, because the plant was thought to drive away various forms of disease. In former days it was held to possess great curative powers. Prior, writing in the seventeenth century, tells us:

'It is put in drinkes for woundes and that is the cause why some doe commonly say that he that hath Bugle and Sanicle will scarce vouchsafe the chirugeon a bugle.'

If we look at Dr Duke’s analysis, there is support for this use.  AUCUBIN in the plant for example, is Antibacterial; Antiinflammatory IC50=12-72 uM; Antioxidant; Antistaphylococcic; and a Candidicide.  HARPAGIDE is Analgesic; Antiarthritic; and an Antiinflammatory.  TANNIN itself [150,000 ppm] is Antibacterial; Antidysenteric; Antihepatotoxic; Antioxidant; Antiradicular [relieves pain].
TANNIN is also an Antiviral; and one virus against which it fights is HIV.

There are indications that we have not even begun to fully appreciate the potential of this plant.  We know from Dr Duke that it helps with Candidiasis, but there may be more as Culpepper says “it worketh no less powerfully and effectually for such ulcers and sores as happen in the secret parts of men and women”.

Culpepper also praises its ability to help with an overindulgence in alcohol, or as we used to call it ‘the whirly pits’

The truth is, I have known this herb cure some diseases of Saturn, of which I thought good to quote one. Many times such as give themselves much to drinking, are troubled with strange fancies, strange sights in the night time, and some with voices, as also with the disease ephialtes, or the mare. I take the reason of this to be (according to Fernelius) a melancholy vapour made thin by excessive drinking strong liquor, so flies up and disturbs the fancy, and breeds imaginations like itself, viz. fearful and troublesome. These I have known cured by taking only two spoonfuls of the syrup of this herb, after supper two hours, when you go to bed. But whether this does it by sympathy or antipathy, is some doubt in astrology.


Ajuga reptans herb has been used in traditional Austrian medicine internally as a tea for the treatment of disorders related to the respiratory tract. 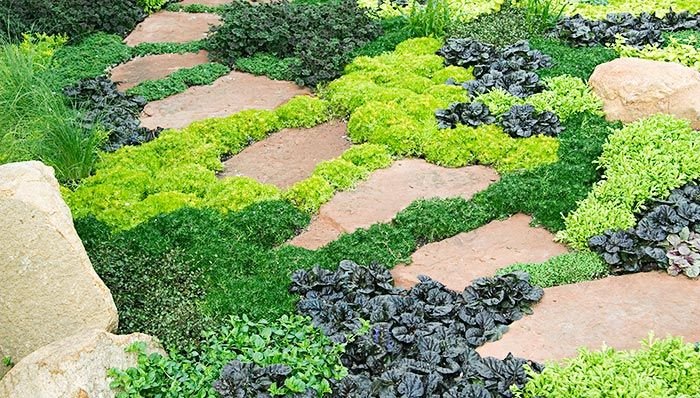