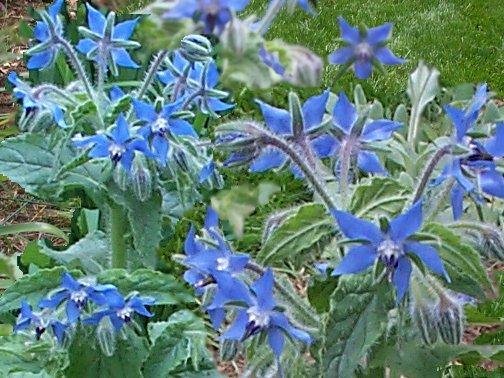 Borage (Borago officinalis), is an annual herb in the flowering plant family Boraginaceae.

It is native to the Mediterranean region and has naturalized in many other locales. It grows satisfactorily in gardens in the UK, for example, remaining in the garden from year to year by self-seeding.

And it is very pretty.

Borago officinalis grows to a height of 60–100 cm (2.0–3.3 ft), and is bristly or hairy all over the stems and leaves; the leaves are alternate, simple, and 5–15 cm (2.0–5.9 in) long. The flowers are complete, perfect with five narrow, triangular-pointed petals. Flowers are most often blue, although pink flowers are sometimes observed.  We will have more to say about this a little later, as this is significant.

One of Borage’s chief claims to fame is its efficacy in companion planting. It is said to protect or nurse “legumes, spinach, brassicas, and even strawberries.” It is also said to be a good companion plant to tomatoes because it confuses the mother moths of tomato hornworms or manduca looking for a place to lay their eggs.

One of the reasons that Borage may be so helpful is that its leaves are essentially toxic.  They are intended to be toxic to insects, but as we shall see they may well be toxic to humans too.  This and the hairs on the stem and leaves are all designed to deter predators and if they deter predators, then they make good companion plants! 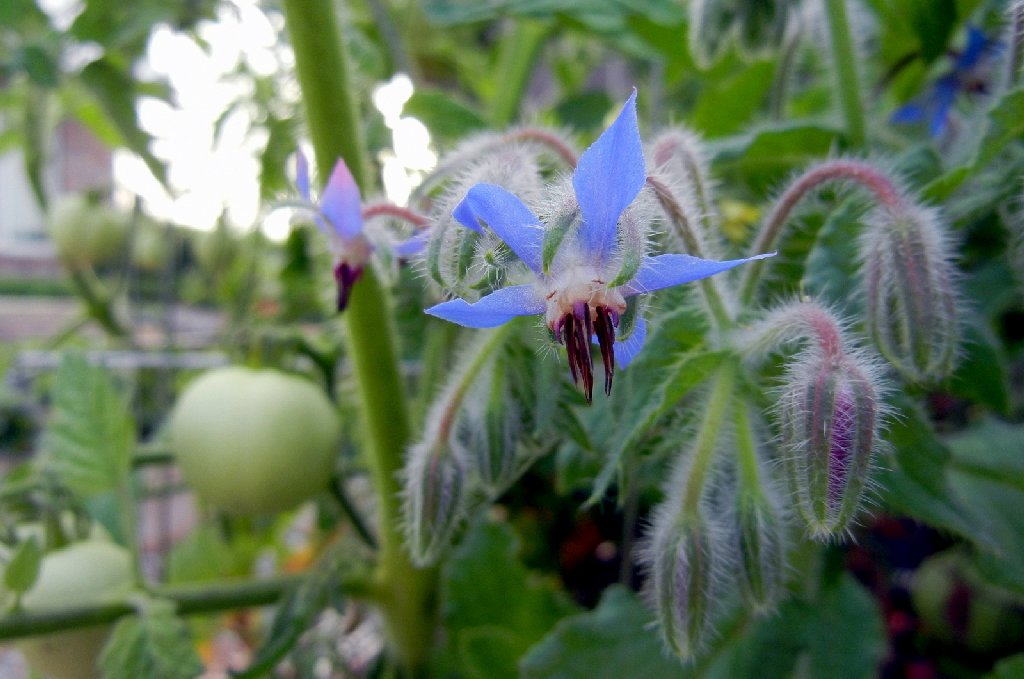 Borago officinalis is an annual.  It is hardy to zone (UK) 7 and is not frost tender. It can be grown on  light (sandy), medium (loamy) and heavy (clay) soils, and it can grow in nutritionally poor soil.  It is suited to pH: acid, neutral and basic (alkaline) soils and can grow in very alkaline soils.
It can grow in semi-shade (light woodland) or no shade. It prefers well drained soil, but the soil can be dry or moist; the plant can tolerate drought.

Plants for a Future
A very easily grown plant, succeeding in ordinary garden soil, preferring a dry soil and a sunny position. It grows particularly well in loose, stony soils with some chalk and sand. Plants are tolerant of poor dry soils, though much bigger specimens are produced when the plants are growing in better conditions. Tolerates a pH in the range 4.8 to 8.3. Although an annual, it usually maintains itself by self-sowing, sometimes in quite a prolific manner, as long as the soil is disturbed by hoeing etc. Plants often develop mildew when growing in dry conditions or towards the end of the growing season. 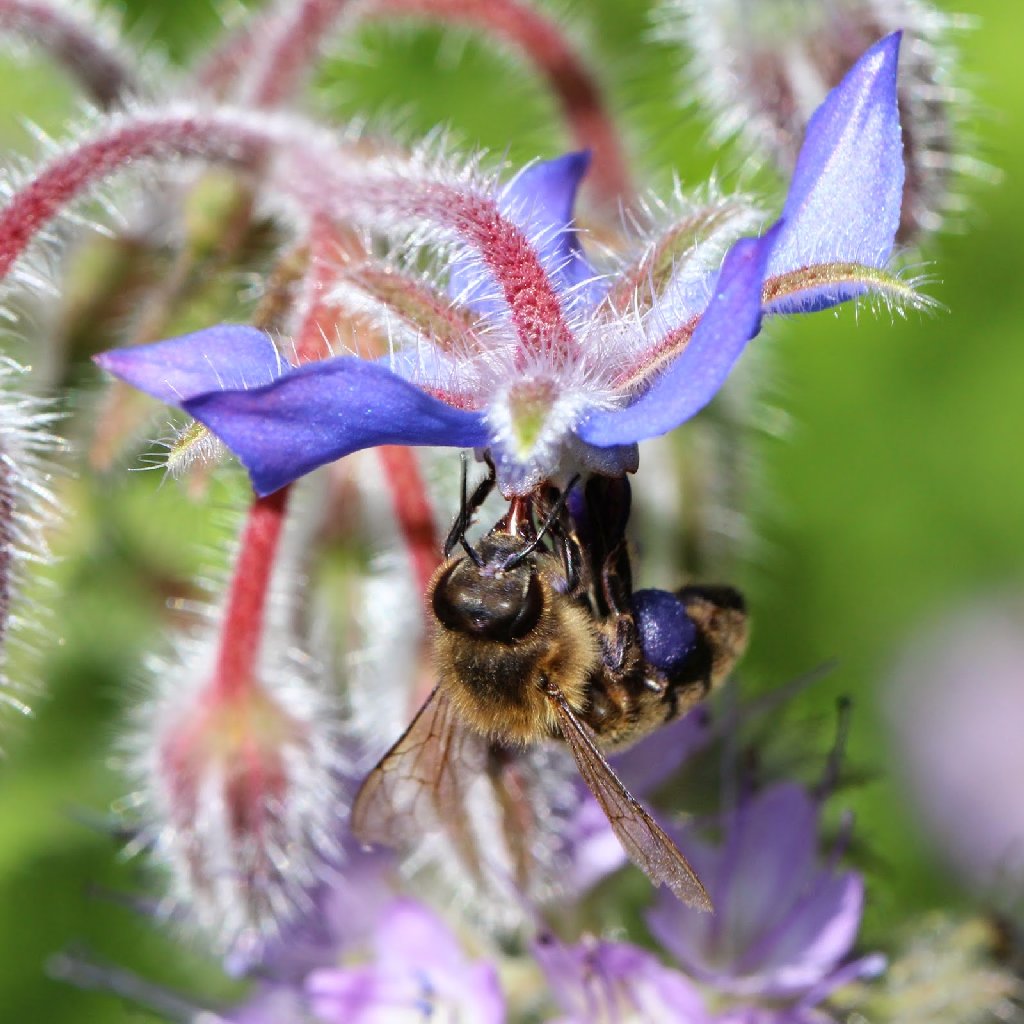 Borage has an ‘indeterminate growth habit’ which may lead to prolific spreading. In temperate climate such as in the UK, its flowering season is relatively long, from June to September.

In milder climates, borage will bloom continuously for most of the year.

The seeds ripen from July to October. The flowers are hermaphrodite (have both male and female organs) and are pollinated by Bees.

It is noted for attracting wildlife.

According to Wikipedia “The leaves are edible and the plant is grown in gardens for that purpose in some parts of Europe”. Having looked at Dr Duke’s analysis of the plant, however, this would not seem to be a wise move.

They then say “It is notable that the leaves have been found to contain small of the liver-toxic PAs intermedine, lycopsamine, amabiline and supinine. Leaves contain mainly the toxic lycopsamine also amabiline and the non-toxic saturated PA thesinine”.

The entry on Plants for a Future gives specific advice

The plant, but not the oil obtained from the seeds, contains small amounts of pyrrolizidine alkaloids that can cause liver damage and liver cancer. These alkaloids are present in too small a quantity to be harmful unless you make borage a major part of your diet, though people with liver problems would be wise to avoid using the leaves or flowers of this plant 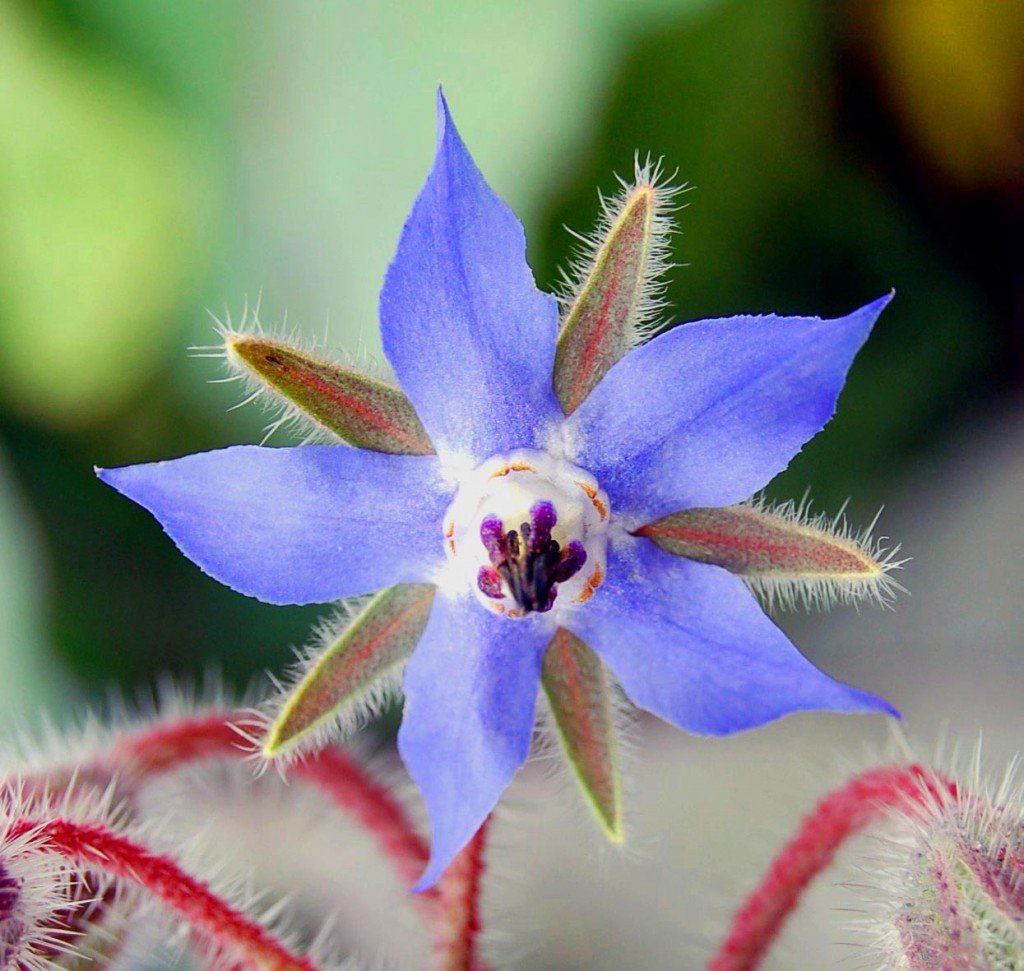 The problem with small amounts is that even small amounts can have their effect.   On the whole, given the number of safe and tasty food alternatives, we are not going to pursue this use of borage, preferring instead to steer a safe course.

So why is borage on the site?

Because the seed does have distinct medicinal qualities and indeed the plant is commercially cultivated for borage seed oil extracted from its seeds.

Dr Duke in his analysis [see below] found the seed to be a source of gamma-linolenic acid (GLA).  In some cases and in some analyses borage seed is one of the highest known plant-based sources (17-28%). The seed oil content is between 26-38%.

The oil is used in alternative medicine, but great great care is needed not to overdose.  The seeds themselves are a much safer alternative.

Many herbal products are known to produce serious adverse effects. Borage oil is derived from the seeds of the borage plant (Borago officinalis) an abundant source of gamma-linolenic acid (GLA), and Borage oil has been promoted as a treatment for rheumatoid arthritis, atopic dermatitis, diabetic neuropathy, and menopause-related symptoms. We report a case of status epilepticus in a patient who consumed borage oil for one week. PMID: 21387119

Where no activity has been reported, the chemical is excluded.  The full list with all chemicals is available on Dr Duke’s site for those who are interested.

The minerals and vitamins as well as essential amino acids are listed for completeness, but the activity has not been expanded for most of the plant because the leaves are poisonous and the only useful safe activity is in the seeds. 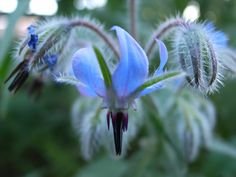 Dr Duke has no analysis of the flowers, but there is one interesting activity that deserves a mention here.
“Flowers are a deeper blue when grown in poorer soils”.
This led us to suspect that Borage is, like the hydrangea, a chelator of metal – probably aluminium.  In effect, if it is on soils containing aluminium it will draw up the aluminium into its flowers and roots.

The chemical that may be responsible for this action might be the Tannin, a known chelator.
This makes it exceptionally useful  as a bioremedial plant as Aluminium is toxic.  Dr Duke’s analysis shows no aluminium, but that may be because the soul in which the plant was grown contained none.  It does mean however, that eating the flowers is not a wise move either.  The deeper the blue, the more aluminium it has attracted.

There are a number of chemicals in the leaf of borage which mean that it would not be wise to ingest them.  Described as ‘Hepatotoxic’ [Amabiline, Intermedine, Lycopsamine], and ‘Cyanogenic’ [Dhurrin], there are a fair number. Supinine in the leaf is described as both Hepatotoxic and Mutagenic.  We have highlighted in RED all the chemicals that are poisonous. 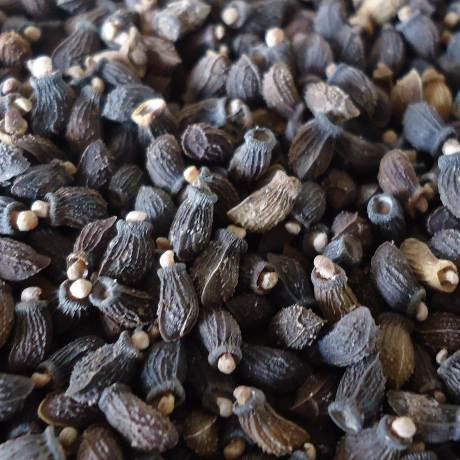 The seeds on the other hand appear to be safer.  Through a number of chemicals they may help with "acne, ‘thick blood’, alcoholism, rheumatoid arthritis, atherosclerosis, eczema, obesity, multiple sclerosis, period pains and PMS, prostate problems and Raynaud’s syndrome"!  To find out how, you will need to go to Dr Duke’s site and follow the references.

The seeds have vasodilatory properties too.

Much of this activity may actually be mediated by one chemical and not the one often cited and that is Hydroxyproline - a key building block in both collagen and elastin.  We have used BLUE to show the chemicals Dr Duke has identified in the seed.

There is one very interesting property of the seeds and that is they are, through the chemical Hydroxyproline, Vulneraries.  A Vulnerary helps heal wounds and in this case it does it via repair of the skin.
Collagen has an unusual amino acid composition and sequence:

Collagen then contains two uncommon derivative amino acids not directly inserted during translation. These amino acids are found at specific locations relative to glycine and are modified post-translationally by different enzymes, both of which require vitamin C as a cofactor.

Here we see Hydroxyproline being derived directly from a plant.  To heal all the skin problems and other wound related problems, you would need to eat plants containing Vitamin C, proline, lysine and glycine, but borage seed may help here a great deal providing direct input of a chemical that - if the person had some problem with their processing of proline into hydroxyproline, -  may provide a solution.