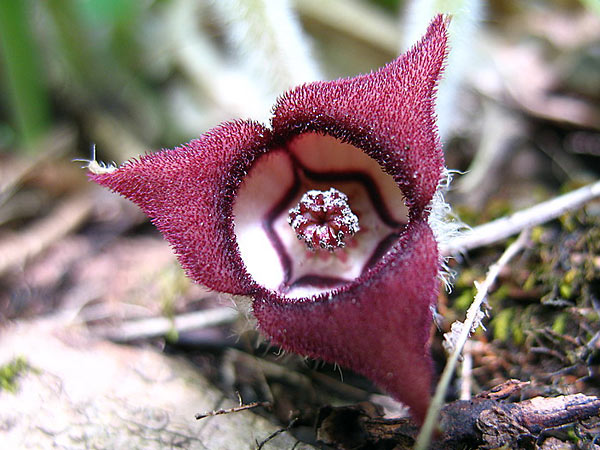 Asarum is a genus of plants in the birthwort family Aristolochiaceae, commonly known as ‘wild ginger’.  The plant is called wild ginger because the rhizome smells similar to ginger root, but the two are not related and the rhizome should not be consumed.

The leaves and underground stems (rhizomes) of some Asarum species give off a pleasant odour when bruised, and the dried strong-scented root of the wild ginger plant is a source of an aromatic oil used in perfumery.

The toxicity of Asarum 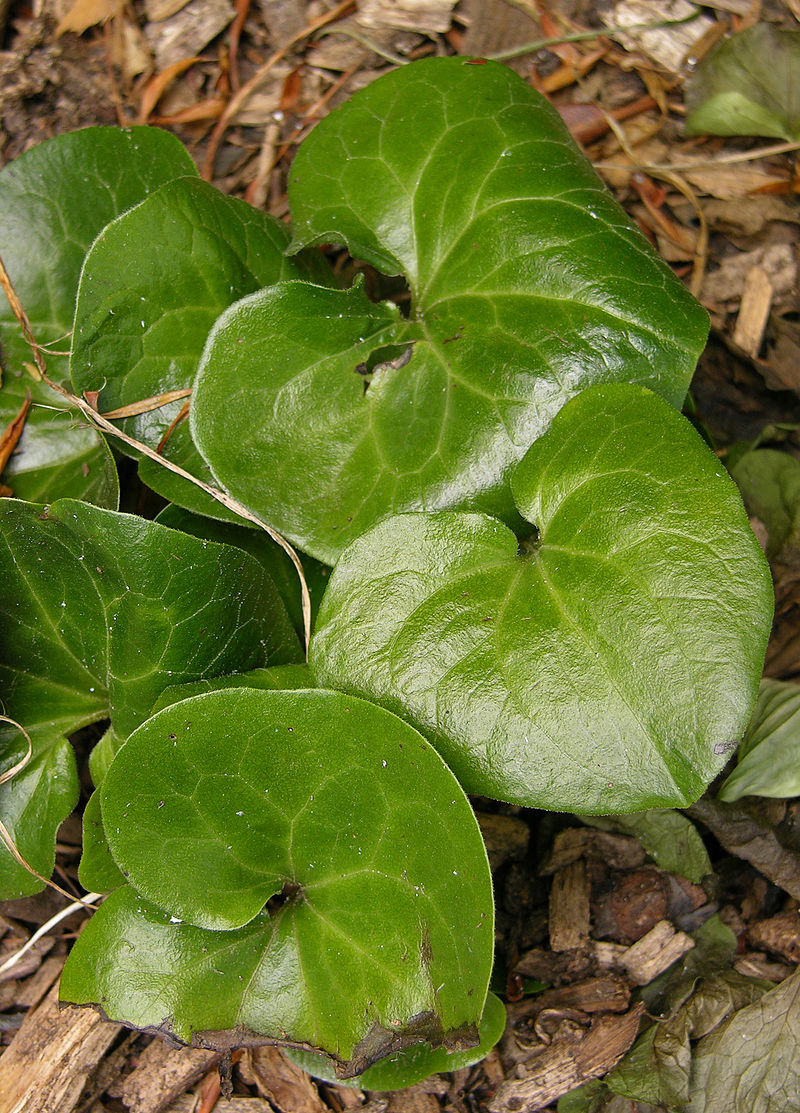 Aristolochic acids (AAs) widely exist in such plants as Aristolochia and Asarum. The renal toxicity of AAs as well as its carcinogenicity to urinary system have been widely known. In 2003 and 2004, China prohibited the use of Aristolochiae Radix, Aristolochiae Manshuriensis Caulis and Aristolochiae Fangchi Radix, and required administering other AAs-containing medicines in accordance with the regulations for prescription drugs.  PMID:  29493131

Some traditional Chinese medicines show only a small amount of detectable AA-I.  In contrast, the AAs content in Aristolochia (including Fructus Aristolochiae, kaempfer dutchmanspipe root) is relatively high.  The problem seems to be that the amount varies depending on the parts used, origins, processing methods, and extraction process.  This said, there are better alternatives than Asarum for many of the medicinal uses to which it was once put.

Both Mrs Grieve and Culpepper advise against their use internally - “Asarabacca was formerly used as a purgative and emetic also to promote sneezing - but it is now rarely used, having been supplanted by safer and more certain remedies”.

At first sight, therefore, these plants would seem to have no uses medicinally. But the Asarum genus do have a use as insect repellants, and it is this use we will explore.  In other words one does not ingest the plants.  Most of this activity, as one would expect, is found in the rhizome, as plants obviously want to attract insects to their flowers, whilst stopping them eating the roots. 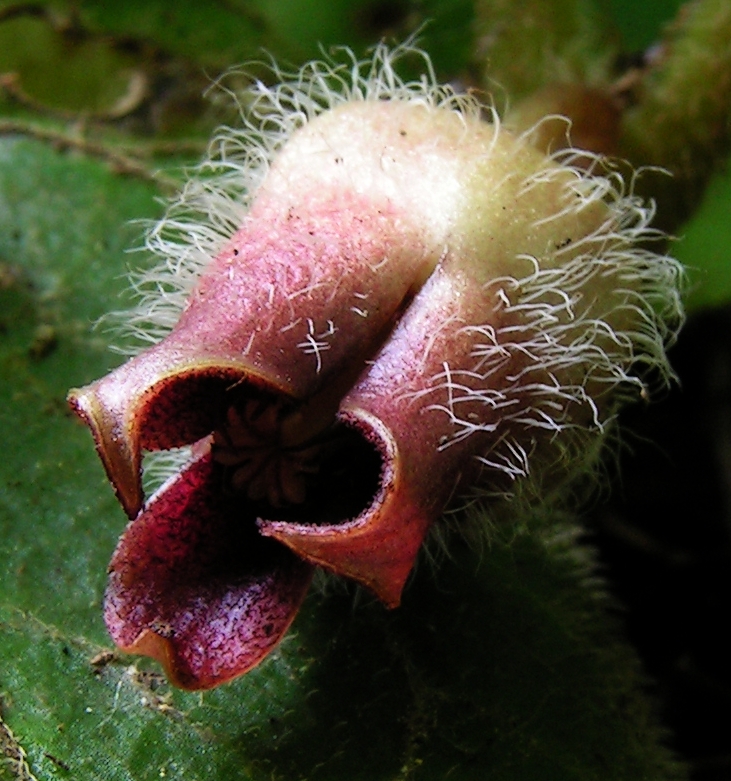 Traditionally, the genus Asarum was considered as a single genus with about 85 species. However, a trend exists among botanists to segregate the genus into separate genera, based on considerations of chromosome number and floral morphology :

Asarum is a genus of low-growing herbs distributed across the temperate zones of the Northern Hemisphere, with most species in East Asia (China, Japan, and Vietnam) and North America, and one species in Europe. Biogeographically, Asarum originated in Asia.   Wild ginger favours moist, shaded sites with humus-rich soil. 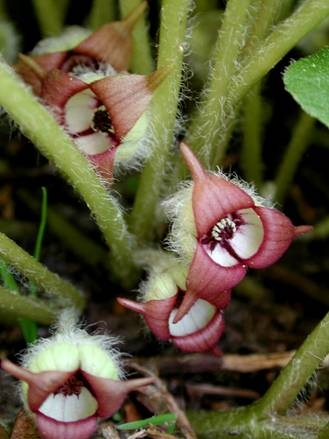 The Asarum genus has characteristic kidney-shaped leaves, growing from creeping rhizomes, and all bear small, axillary, brown or reddish flowers.  The calyx is woolly and cleft to the base, its segments spreading at the top.  The deciduous, heart-shaped leaves are opposite, and borne from the rhizome which lies just under the soil surface. Two leaves emerge each year from the growing tip. The curious jug-shaped flowers, which give the plant an alternate name, little jug, are borne singly in spring between the leaf bases.

Canada wild ginger - If we take Asarum canadense, commonly known as Canada wild ginger, Canadian snakeroot, and broad-leaved asarabacca, as an example, it is a herbaceous, perennial plant which forms dense colonies in the under-story of deciduous (rarely coniferous) forests from sea level to 1300 metres, throughout its native range in eastern North America, from the Great Plains east to the Atlantic Coast, and from south-eastern Canada south to around the Fall Line in the southeastern United States.  It grows to about 15 to 30 cm (6 to 12 inches) tall. Handling the leaves is said to cause dermatitis in some people.

It usually bears a single inconspicuous cup-shaped flower. The flower develops in the angle between two leafstalks at the surface of the ground.  In the USA, the flowers bloom from April through June, and have three sepals, tan to purple on the outside and lighter inside, with tapered tips and bases fused into a cup.  Pollinated flowers develop into a pod, which splits open when ripe to reveal seeds with elaiosomes, structures that are eaten by ants (myrmecochory).

European wild ginger, or asarabacca (A. europaeum), on the other hand, is a creeping plant with glossy leaves and bell-shaped brown flowers, and is native to Europe and Asia.  In Europe it flowers from May to July. 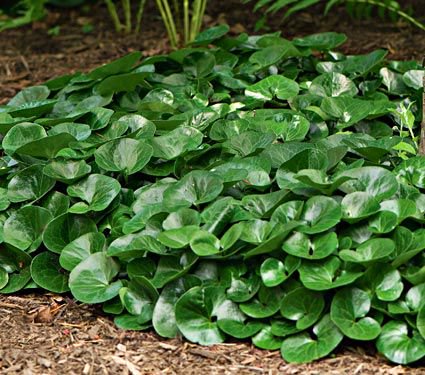 Propagation of Snake Root: Seed - best sown in a cold frame as soon as it is ripe in the summer. Stored seed will require 3 weeks cold stratification and should be sown in late winter. The seed usually germinates in the spring in 1 - 4 or more weeks at 18C. When large enough to handle, prick the seedlings out into individual pots and grow them on in light shade in the greenhouse for at least their first winter. Plant them out when large enough in late spring. Division in spring or autumn. Plants are slow to increase. It is best to pot the divisions up and keep them in light shade in the greenhouse until they are growing away strongly

Disadvantages - The Asarum genus are not ideally suited to  decorative gardens, despite the fact they are frequently grown, and they should not be introduced anywhere near vegetable gardens. 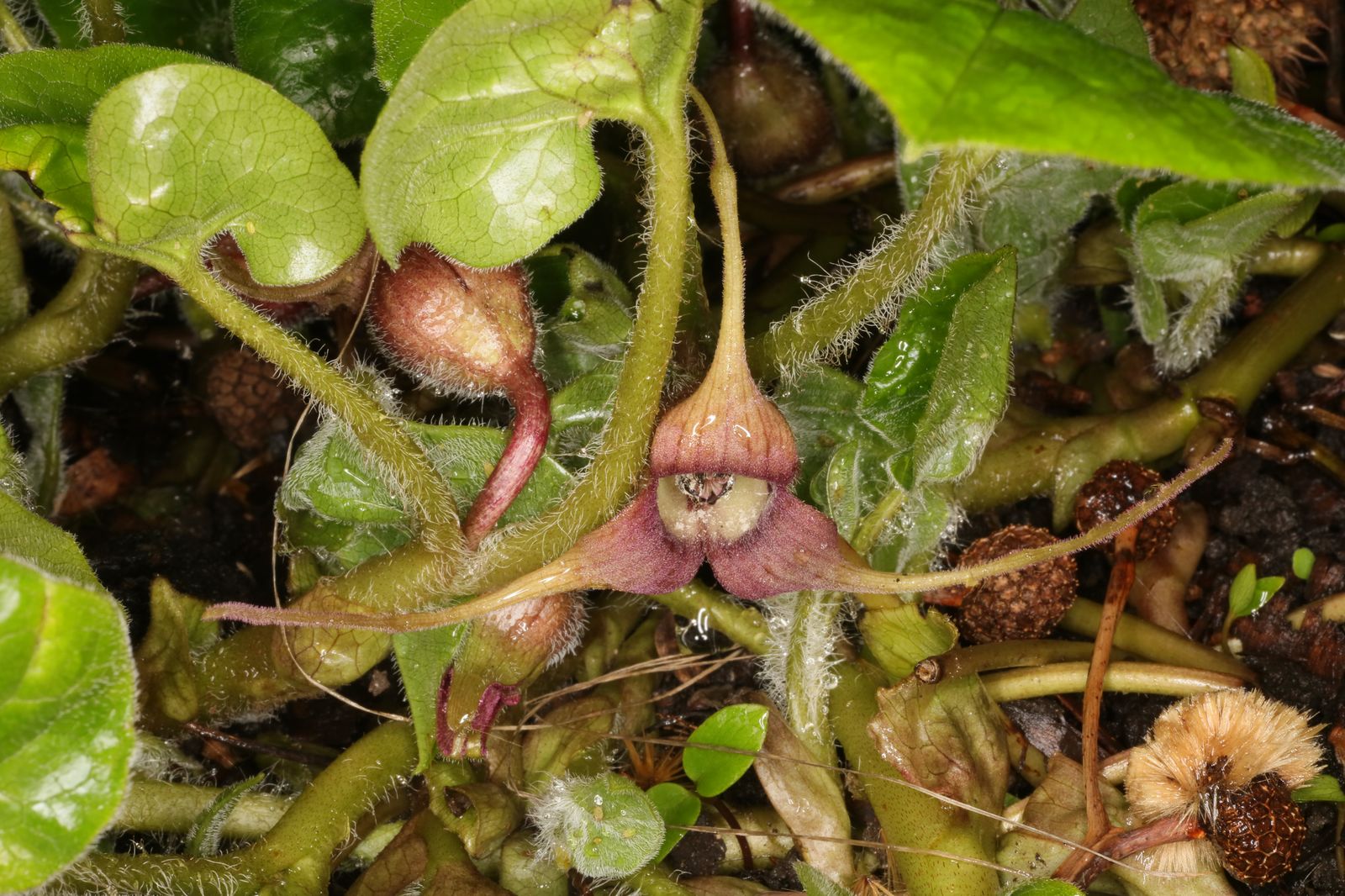 Alpha terpineol in the rhizome of the Asarum genus repels termites [known as a Termiticide].  They also appear to repel cockroaches.  As such by growing the plant near your house – or even under it – it may keep these insects away.

Furthermore, a number of the chemicals repel Dermanyssus gallinae (also known as the red mite, poultry mite, red poultry mite, roost mite and chicken mite).  The mite is an ectoparasite of poultry and has been implicated as a vector of several major pathogenic diseases. And, despite its common names, it has a wide range of hosts including several species of wild birds and mammals including humans.

Lasioderma serricorne, the cigarette beetle, is a pest of tobacco, both in the refined cigarette packet presentation and also as stored in hogsheads and bales, but is also a minor pest of oilcake, oilseeds, cereals, dried fruit, sage, flour, and some animal products.  Liposcelis bostrychophila is a species of booklouse and is known nearly worldwide as a common pest of stored products. It is especially prevalent in cereals.   As we can see from the observation, Asarum plants possessed significant fumigant toxicity against these two insects and acted as very effective repellants. 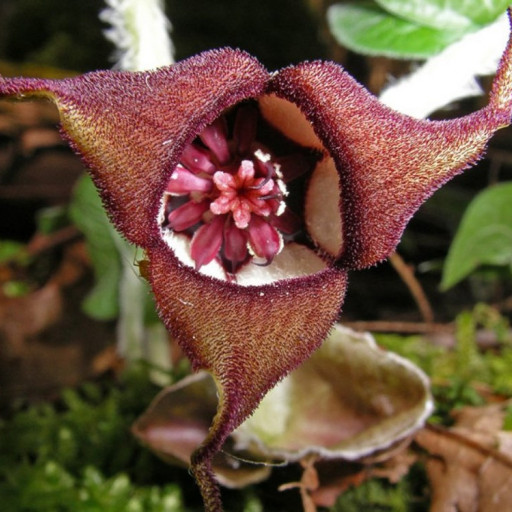 According to Grenand, P., Moretti, C., and Jacquemin, H. 1987. In Pharmacopees Traditionnelles en Guyane. l'ORSTROM, Paris. 569 pp;  Elemicin in the rhizome is a Schistosomicide, meaning it is capable of combatting Schistosomiasis -  Any one of various diseases of humans caused by parasitic blood flukes of the genus Schistosoma.  You may know the disease under the names of bilharzia.

And Geraniol in the Rhizome is a Trichomonicide LD100=300 ug/ml [Duke, James A. 1992. Handbook of phytochemical constituents of GRAS herbs and other economic plants. Boca Raton, FL. CRC Press].  A Trichomonicide is a chemical used to destroy trichomonads - parasitic protozoans with four to six flagella and an undulating membrane, infesting the urogenital or digestive system.

As such, despite the supposed Native American uses for this plant, the most useful activity is its repellent activity against some very serious disabling parasites and insects.  And remember

The United States Food and Drug Administration warns that consumption of aristolochic acid-containing products is associated with "permanent kidney damage, sometimes resulting in kidney failure that has required kidney dialysis or kidney transplantation. In addition, some patients have developed certain types of cancers, most often occurring in the urinary tract." 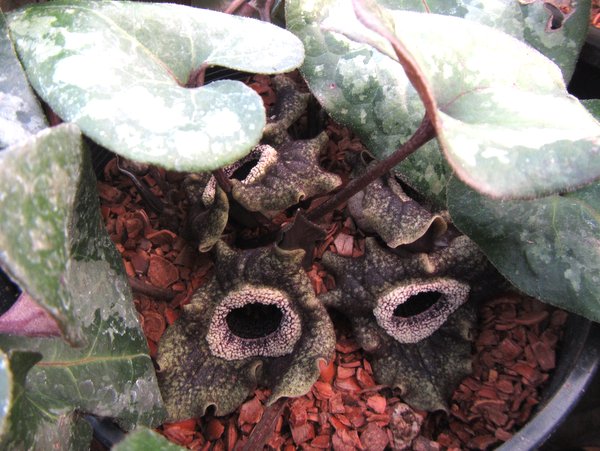 Species of the genus Asarum are used as herbal medicines in many parts of the world, including Europe and Asia. The Chinese Pharmacopeia lists the roots and rhizomes of Asarum heteropoides f.Mandshuricum (Maxim.) Kitag, and Asarum sieboldii Miq. under the Pin Yin name Xixin (Achenbach and Fischer, 1997). In Europe Asarum europaeumL. is used in homeopathic tinctures (Nitzsche et al., 2013) and in Canada and the USA Asarum canadense L. was used by NativeAmericans (Moermon, 2017).  Like the related genus Aristolochia (which is also listed in the Chinese Pharmacopeia), Asarum contain aristolochic acids and aristolactams (Mix et al., 1982; Kumar et al., 2003). These nitrophenanthrene derivates have nephrotoxic and carcinogenic effects (Michl et al., 2014). Species of Aristolochia have become a key concern in healthcare as they are associated with aristolochic acid nephropathy (AAN), a renal fibrosis often associated with upper urothelial cancer (UUC; Chen et al., 2012). It is estimated that in China alone 100 million people may be at risk of developing AAN (Hu et al., 2004; Grollman, 2013)