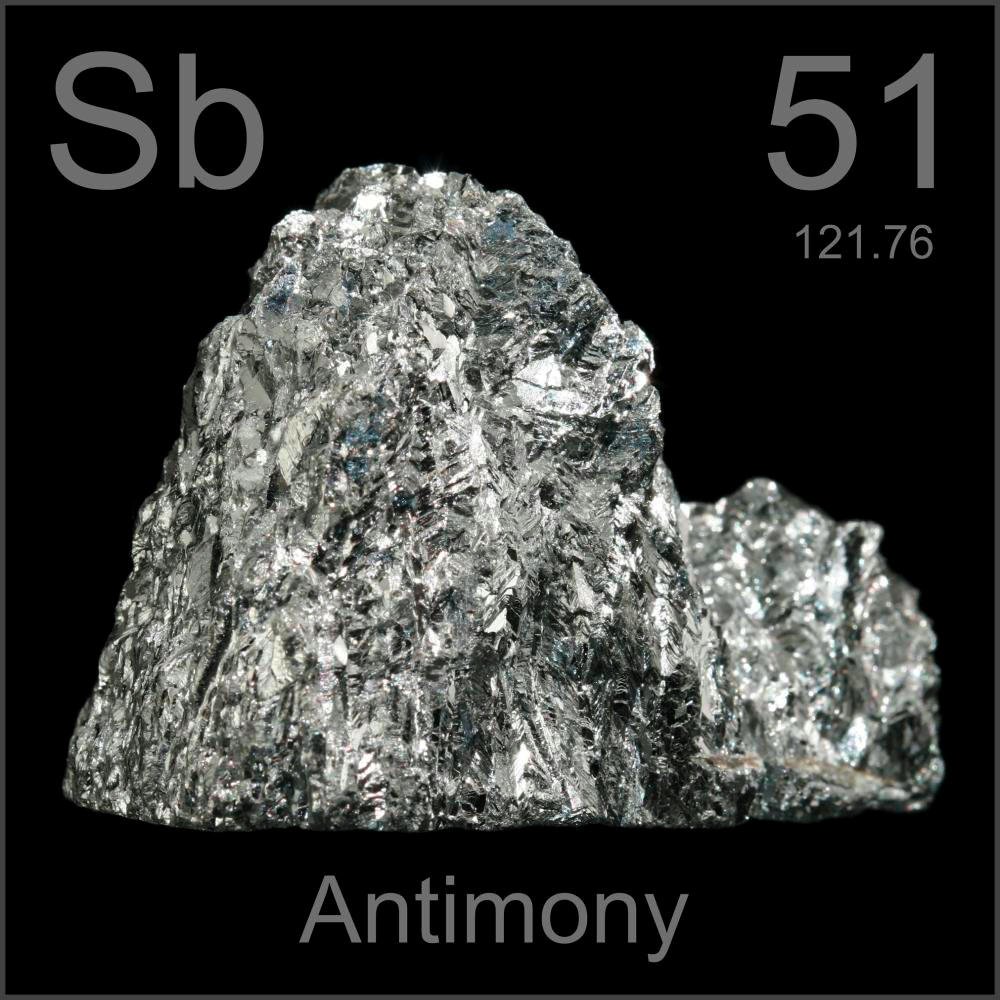 Antimony is a ‘metalloid’ element with chemical symbol Sb.  It is the 63rd most abundant element.

It can exist in two forms – the metallic form is bright, silvery, hard and brittle; the non-metallic form is a grey powder.  Antimony is stable in dry air and is not attacked by dilute acids or alkalis.  The word metalloid is used because antimony is not a ‘true’ metal and in many ways it resembles lead, being a poor conductor of electricity.

Antimony levels in the soil and in the atmosphere have been increasing in parallel with lead levels [Lead often contains traces of Antimony] and have been increasing more rapidly in the last century as more uses have been found for this element.  Levels in 2004 were around a hundred times higher than in the mid 1800s. 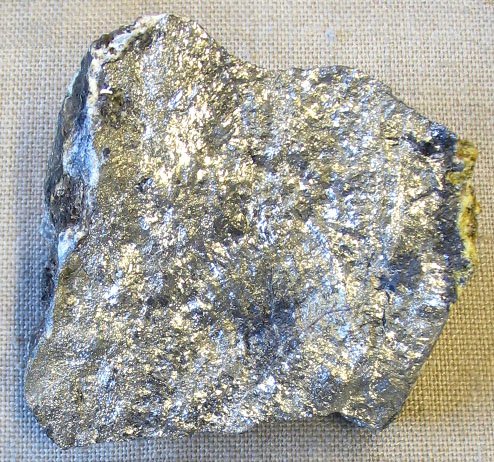 Antimony has no biological role.  It can be found in human beings from the plants they eat, as tiny amounts of antimony are present in soil and when the antimony is in soluble form it is taken up by the plants.

But the level in food crops is generally very low - of the order of parts per trillion  - and as such, as long as the levels do not continue to increase, plants that have taken up antimony pose no threat to human health.

In contrast, Antimony in higher levels poses a real risk to plants.  It stunts their growth.  For example:

The role of antimony (Sb)--a non-essential trace metalloid--in physiological processes running in crops is still poorly understood.  This present paper describes the effect of Sb tartrate (SbIII) on growth, Sb uptake, photosynthesis, photosynthetic pigments, and leaf tissue organization in young sunflower plants grown in hydroponics. We found that growth of below- and above ground part was reduced with increasing concentration of Sb in the medium. Although Sb was mostly taken up by sunflower roots and only small part (1-2%) was translocated to the shoots, decline in photosynthesis, transpiration, and decreased content of photosynthetic pigments were observed. This indicates that despite relatively low mobility of Sb in root-shoot system, Sb in shoot noticeably modifies physiological status and reduced plant growth. Additionally, leaf anatomical changes indicated that Sb reduced the size of intercellular spaces and made leaf tissue more compact.  PMID:  26194244

Thus antimony is an environmental threat, if this research is typical. 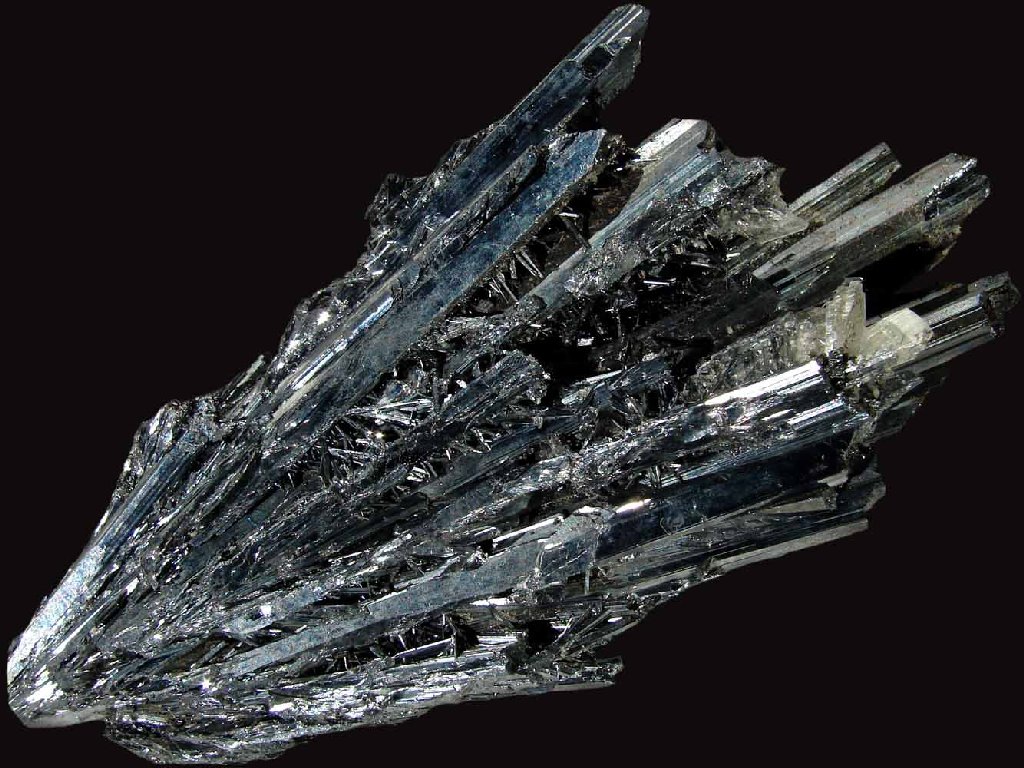 Some extremely unfortunate misunderstandings arose from the use of Antimony as a symbol in alchemy.  Alchemy was a spiritual process – the turning of a base person [lead] into a spiritual person [gold].  The symbolism was needed because of the persecution of anyone wanting to adopt the mystical path. 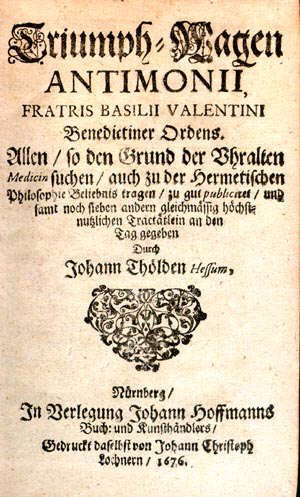 Antimony chemically resembled gold in that it could only be dissolved by the most powerful acid then known ‘aqua regia’.  Thus symbolically a person who had reached the stage of being ‘Antimony’ was quite a good candidate for transmutation into ‘gold’.  Simply put – a promising adept who had clearly a great deal of potential, robust against possible attack.

Basil Valentine produced a book in 1604 entitled The Triumphal Chariot of Antimony which is a confusing mixture of symbolic and actual – deliberately so.  But the medics and the fledgling materialistic chemists, knew nothing of the symbolism, so took the whole as literal, in the same way they took the instructions for mercury to be literal.

And from this point, medicine took a dive from which it has never recovered and people started to be given compounds which were exceptionally toxic.

A little uncombined antimony occurs naturally and is found in silver bearing lodes.  It generally occurs, however, as antimony sulphide which is insoluble.  The extraction of antimony from ores depends on the quality of the ore and composition of the ore. Most antimony is mined as the sulfide. 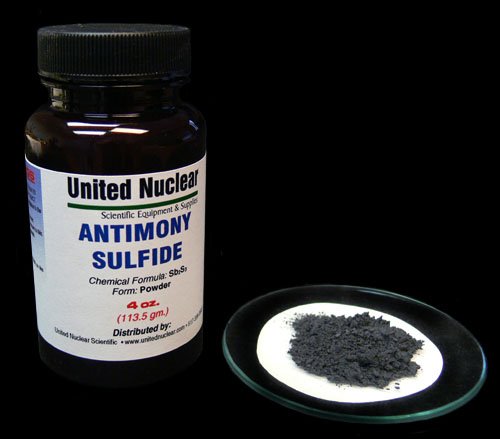 Antimony can be isolated from the crude antimony sulfide by a reduction with scrap iron.  The sulfide is converted to an oxide and advantage is often taken of the volatility of antimony(III) oxide, which is recovered from roasting.  Antimony(III) oxide is an inorganic compound with the formula Sb2O3. It is the most important commercial compound of antimony. It is also found in nature as the minerals valentinite and senarmontite. Sb2O3 dissolves in aqueous solutions.

When heated with carbon, the oxide is reduced to antimony metal. Thus it is this material that is often used directly.  Isolating antimony from its oxide is performed by a carbothermal reduction.

Antimony is still an important metal commercially despite its toxicity.  The map below shows some of the sources.  The other chief ores are stibnite and tetrahedrite, the latter being a mainly copper ore, but it yields antimony as a by-product.  In the USA about half the antimony that is used is recovered from lead batteries. 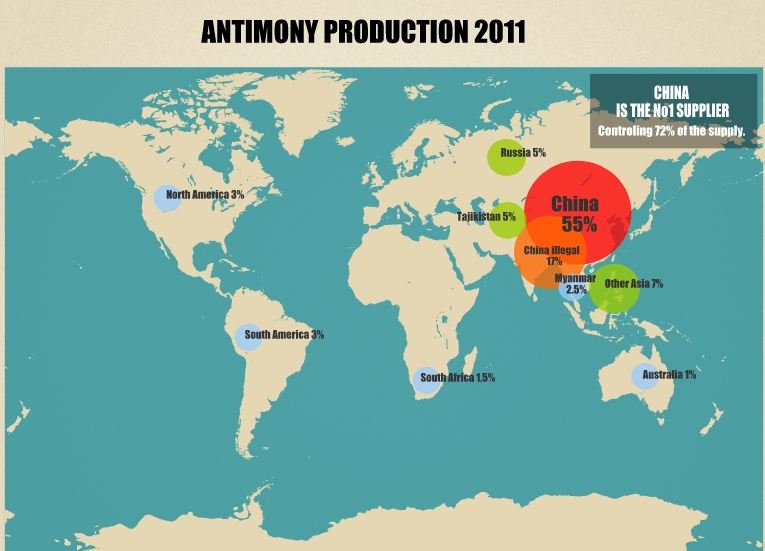 Many of the former uses of Antimony have been discontinued because of its now recognised toxicity, nevertheless, where old uses have died out, new uses appear to be springing up.  We will provide some historical details of its old uses as it is something of an eye opener.

In the Middle Ages antimony pills were sold as ‘resuable laxatives’.  Those suffering from constipation would swallow one pill about the size of a pea and then wait for its toxic action to aggravate the intestines, causing them to ‘become more active’ in order to expel the pill.  Although this may sound unbelievable the pill was retrieved from the excrement and used again.  As Dr John Emsley says “there are even reports of such pills being passed from generation to generation”. 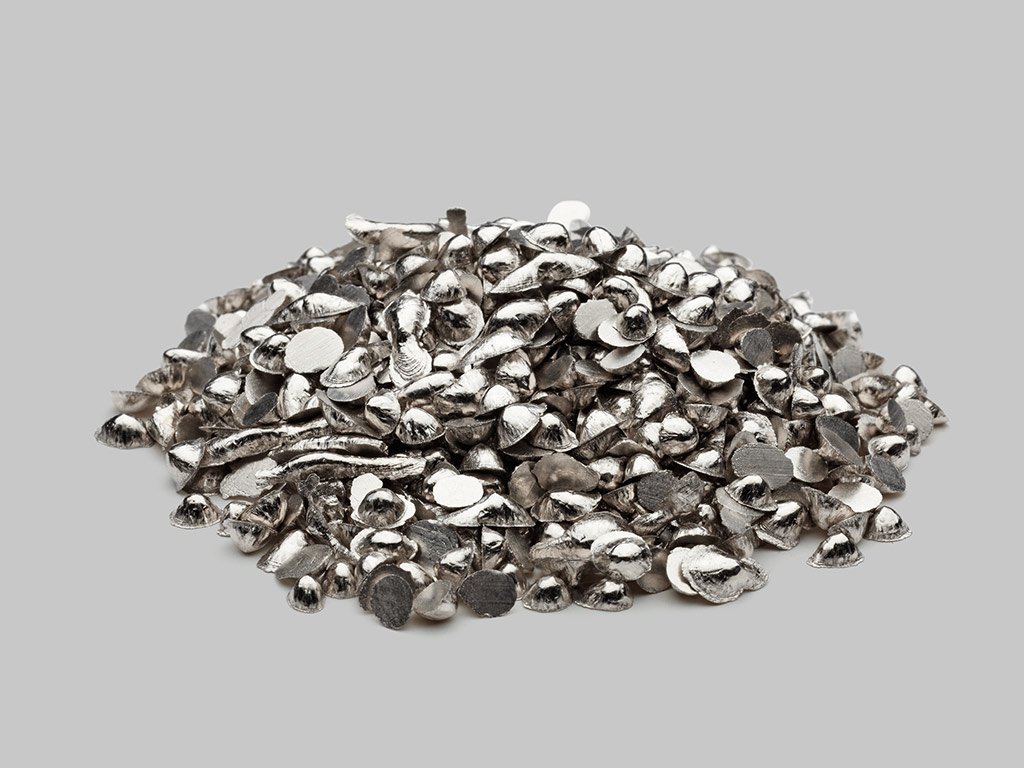 Tartar emetic and other ‘medicines’

Tartar emetic is the antimony potassium salt of tartaric acid.  As its name suggests it produces very rapid vomiting.  One way of generating this compound was to leave wine standing in a cup made of antimony. 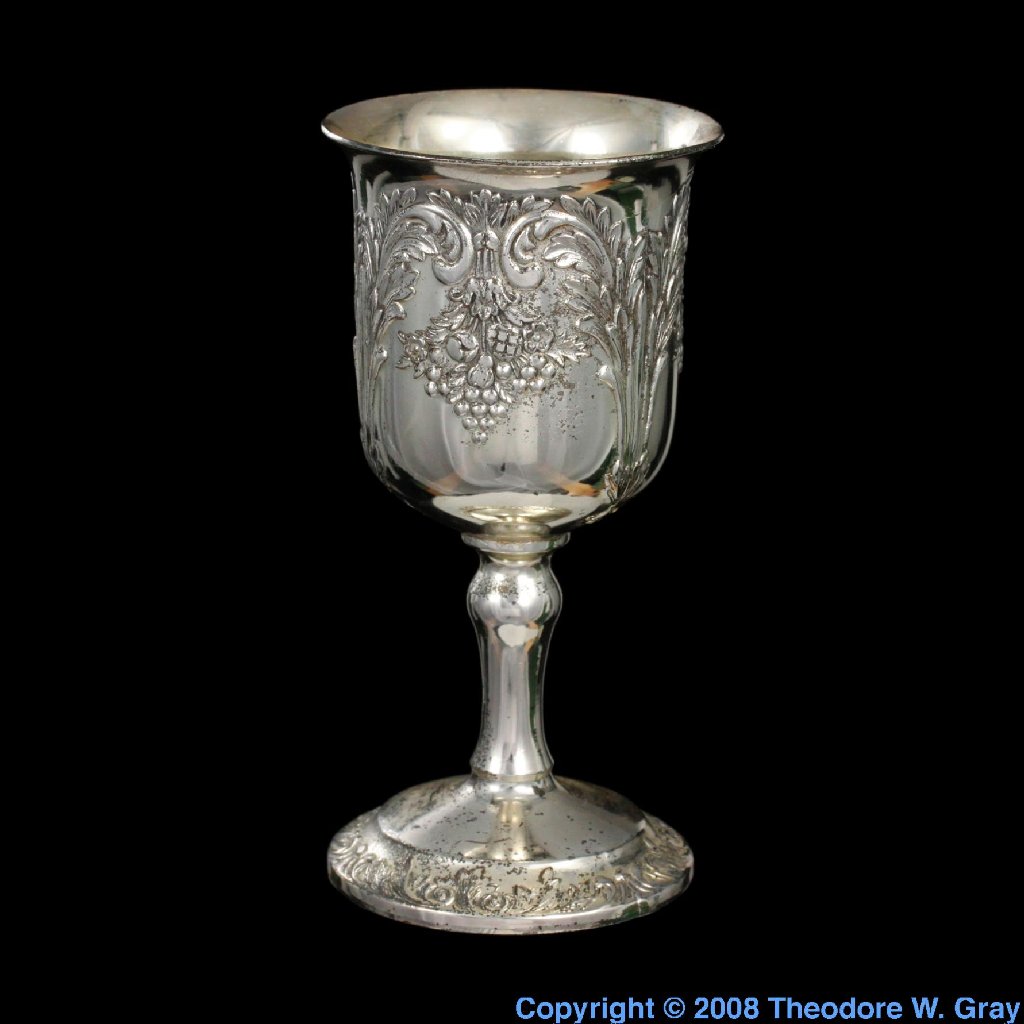 There was a belief that “monks were forced to drink this concoction when they had overindulged”.  Tartar emetic was also at one time a ‘popular hangover cure’.  Even small doses of antimony of around 5 mg produce profuse sweating, whilst larger doses caused vomiting.  Medics in the past regarded these as very helpful and called it ‘purging’.

In 1657, the young 19 year old King Louis XIV of France fell ill with typhoid fever and was treated with an antimony medication known as Earl of Warwick’s Powder – its active ingredient was antimony oxide.  He was apparently cured – sweating and fever can kill viruses and bacteria, so the ‘cure’ was not without a cause.  Unfortunately this then resulted in a flood of new medicines, all with antimony in them claiming to cure everything.  A popular example was Dr James’s Powder which consisted of calcium phosphate and antimony oxide – it was prescribed to cure fevers.

Antimony wine was also sold in the 1700s and consisted of antimony oxide sulphide dissolved in Madeira wine.  It was prescribed as a ‘tonic, a slimming aid [sic], and a sweating agent’.  The Age of Enlightenment.

Antimony has been used as a type of anti-parasitic against a number of very unpleasant parasites.  Rather sadly these parasites have started to become resistant to the use of antimony – though research is ongoing

Antimony (Sb) resistance in leishmaniasis chemotherapy has become one of the major challenges to the control of this spreading worldwide public health problem. Since the plasma membrane pore-forming protein aquaglyceroporin 1 (AQP1) is the major route of Sb uptake in Leishmania, functional studies are relevant to characterize drug transport pathways in the parasite. PMID:  27161624

the section on Antimony poisoning has some useful additional data on this aspect of use.

Antimony oxide – Sb2 O3 – is still used as a flame retardant.  It is used in the plastics used in cars, toys, seat covers, cables, roof sheeting and cot mattresses.  This use accounts for about two thirds of all consumption.  The oxides quench flames by reacting chemically with the hot plastic to form a viscous layer that smothers the flame.  Antimony oxychloride is a fire retardant used in textiles

The black form of Antimony sulphide (Sb2S3) which occurs naturally as the mineral stibnite, is used as a type of mascara known as khol.  The most famous user was the ‘temptress Jezebel’.

The colour Naples Yellow, occasionally found in acrylic paints and at one time used in glazes for ornamental bricks is yellow lead antimonite.. It is made from lead oxide or lead carbonate and antimony oxide. 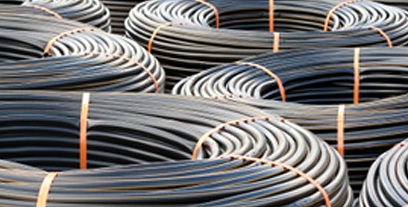 In the days when printing was done with metal typeface, an alloy of 60% lead, 10 tin and 30% antimony was cast to give a high quality typeface.

Antimony lead alloys are used in storage batteries and in bearings and cable sheathing, although these uses are declining as lead gives way to other materials.  Babbitt metal is a tin-antimony alloy used on metal surfaces which come into contact wilst moving, for example, turbines and crankshafts.  It reduces friction between the two surfaces

Some so called ‘pewter’ is not made with lead, but an alloy of 89% tin and 7% antimony, and 2% copper and bismuth.

Semi-conductors have been made with gallium arsenide antimonide and it can thus be found in a number of electronic devices.

Antimony also is used in the making of bullets and bullet tracers. 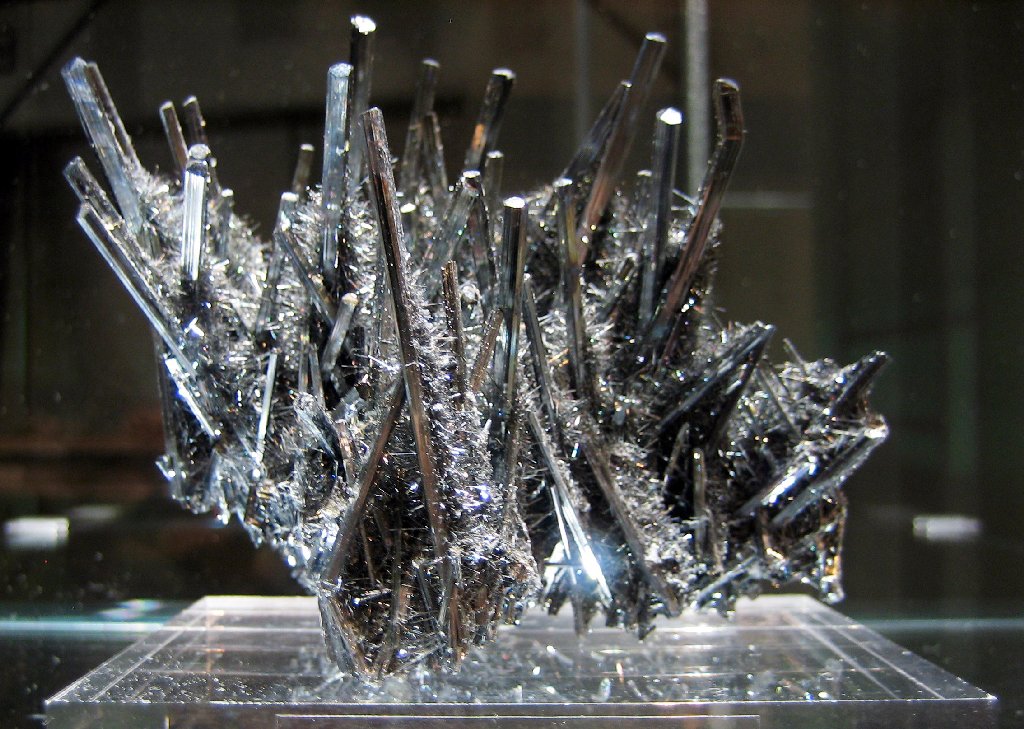 Nature's Building Blocks - An A-Z Guide to the Elements - Dr John Emsley - an invaluable reference book, the book contains far more information on this element if you wish to delve further.