Angiotensin is a peptide hormone that causes blood vessels to constrict. In combination with adenosine, angiotensin controls what blood gets to our bodies in a general way. By balancing the flow in various ways we can regulate how much blood gets to the various organs in our system. It is thus useful in normal bodily function in a number of ways, for example:

The following rather simplistic picture shows the main sequence of flows and the effect of release of angiotensin. 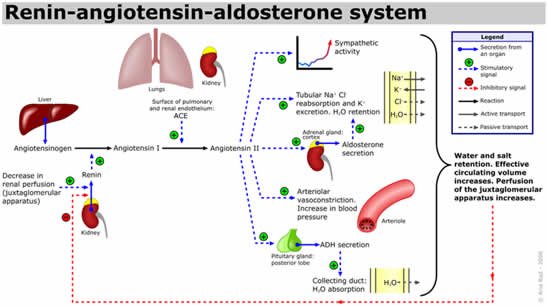 As can be sen from the diagram, Angiotensin I is converted to angiotensin II by the enzyme angiotensin-converting enzyme (ACE, or kinase), primarily through ACE within the kidney.

ACE also has a high density in the lung. ACE is a target for inactivation by ACE inhibitor drugs, which decrease the rate of angiotensin II production.

ACE inhibitor drugs are supposedly major drugs against hypertension, but of course this assumption is highly simplistic and ignores the other effects of angiotensin when it comes to mineral balance and muscle action and effectiveness.  They may cause