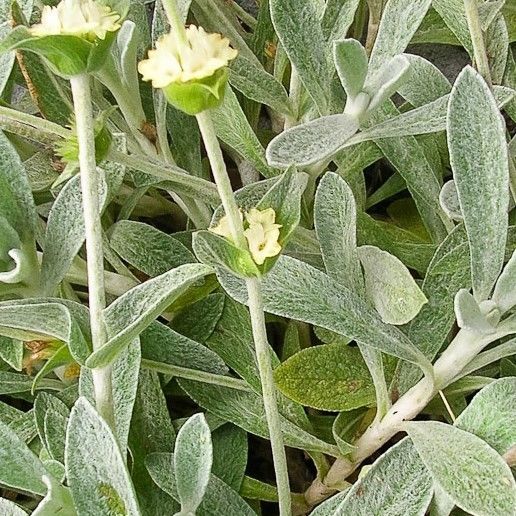 Sideritis (Gr: σιδηρίτις), also known as ironwort, mountain tea and shepherd's tea, is a genus of flowering plants well known for their use as herbal medicine, commonly as an herbal tea. The plant was known, for example,  to ancient Greeks, specifically Pedanius Dioscorides and Theophrastus.

They are abundant in Mediterranean regions, the Balkans, the Iberian Peninsula and Macaronesia, but can also be found in Central Europe and temperate Asia.

These plants are hardy flowering perennials that have adapted to survive with little water and little soil. Only one variety of this plant, Sideritis raeseri, is cultivated, typically in Greece, Albania, Macedonia, and Bulgaria.

The genus is composed of short (8–50 cm), xerophytic subshrubs or herbs, annual or perennial, that grow at high altitudes (usually over 1000 m) with little or no soil, often on the surface of rocks.  A Xerophyte is any plant adapted to life in a dry or physiologically dry habitat (salt marsh, saline soil, or acid bog) by means of mechanisms to prevent water loss.  The plant is covered with short soft downy hair, either shaggy or in a fine, woolly layer of microscopic intertwined hairs.

Sideritis inflorescence is verticillaster, meaning the flowers are arranged in a seeming whorl, consisting in fact of a pair of opposite axillary, usually sessile, cymes. 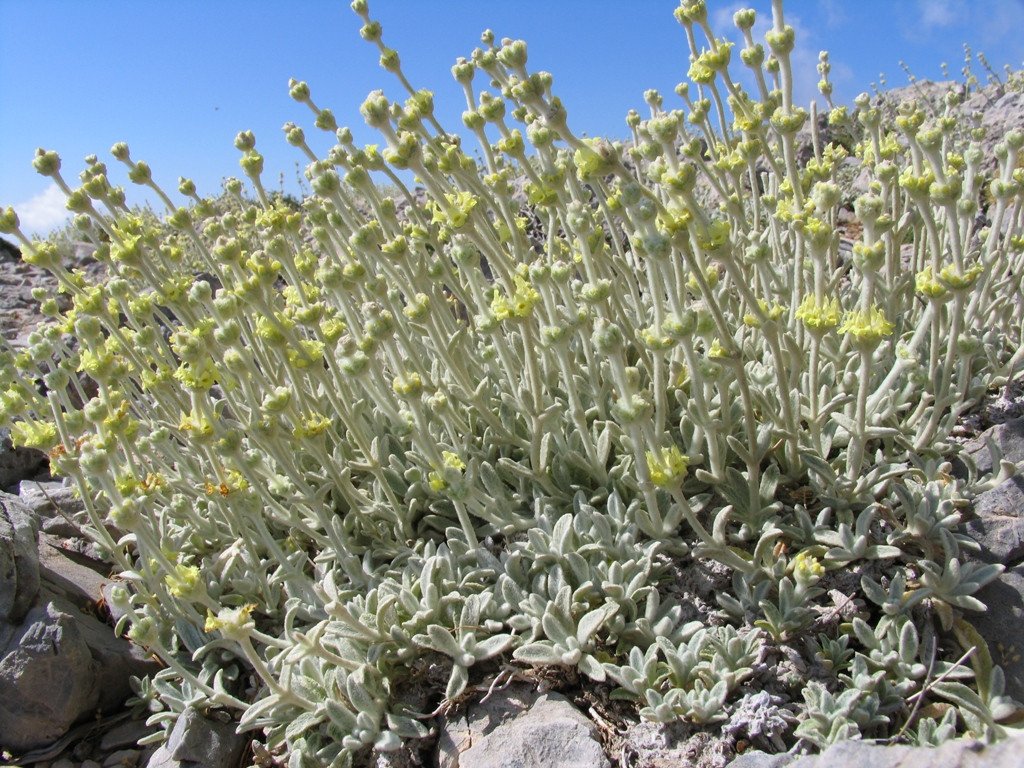 Botanists have encountered difficulties in naming and classifying the varieties of Sideritis due to their subtle differences. One particularly confusing case is that of S. angustifolia Lagasca and S. tragoriganum Lagasca.  There are also problems caused by their similarity to Stachys.

Some example species and subspecies include:

·       Sideritis scardica Gris. - also known as Pirin or Olympus tea after its native areas of Pirin and Mount Olympus

·       Sideritis euboea Heldr - found in the island of Euboea

Sideritis raeseri is the most commonly cultivated Sideritis in Bulgaria,  Greece, Albania and Republic of Macedonia, where advanced hybrids also exist. Planting is recommended during two periods (October–November or February–March in the Northern hemisphere) and gathering in July, when in full bloom. The plant is typically dried before usage.

Very popular in Greece, Turkey, Albania, Kosovo, Bulgaria and the Republic of Macedonia, Sideritis scardica is used as a herb either for the preparation of herbal teas, or for its aromatic properties in local cuisines. 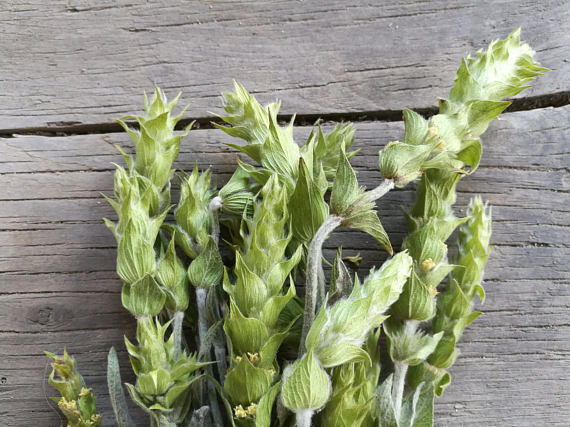 Ironwort has been traditionally used to aid digestion, strengthen the immune system and suppress common cold, the flu and other viruses, allergies and shortness of breath, sinus congestion, even pain and mild anxiety.

Researchers have suggested that the popular pronouncement of ironwort as panacea may have some basis in fact. Studies indicate a positive effect on many common ailments. Ironwort is known scientifically to be anti-microbial, anti-inflammatory, and anti-oxidant. Active elements include diterpenoid and flavonoids.

Significant research has been done on ironwort confirming its popular use to prevent colds, flu, and allergies. Most of this research has taken place in universities in the Netherlands and in Greece, Turkey, Republic of Macedonia, Bulgaria, and Albania, where the plant is indigenous. 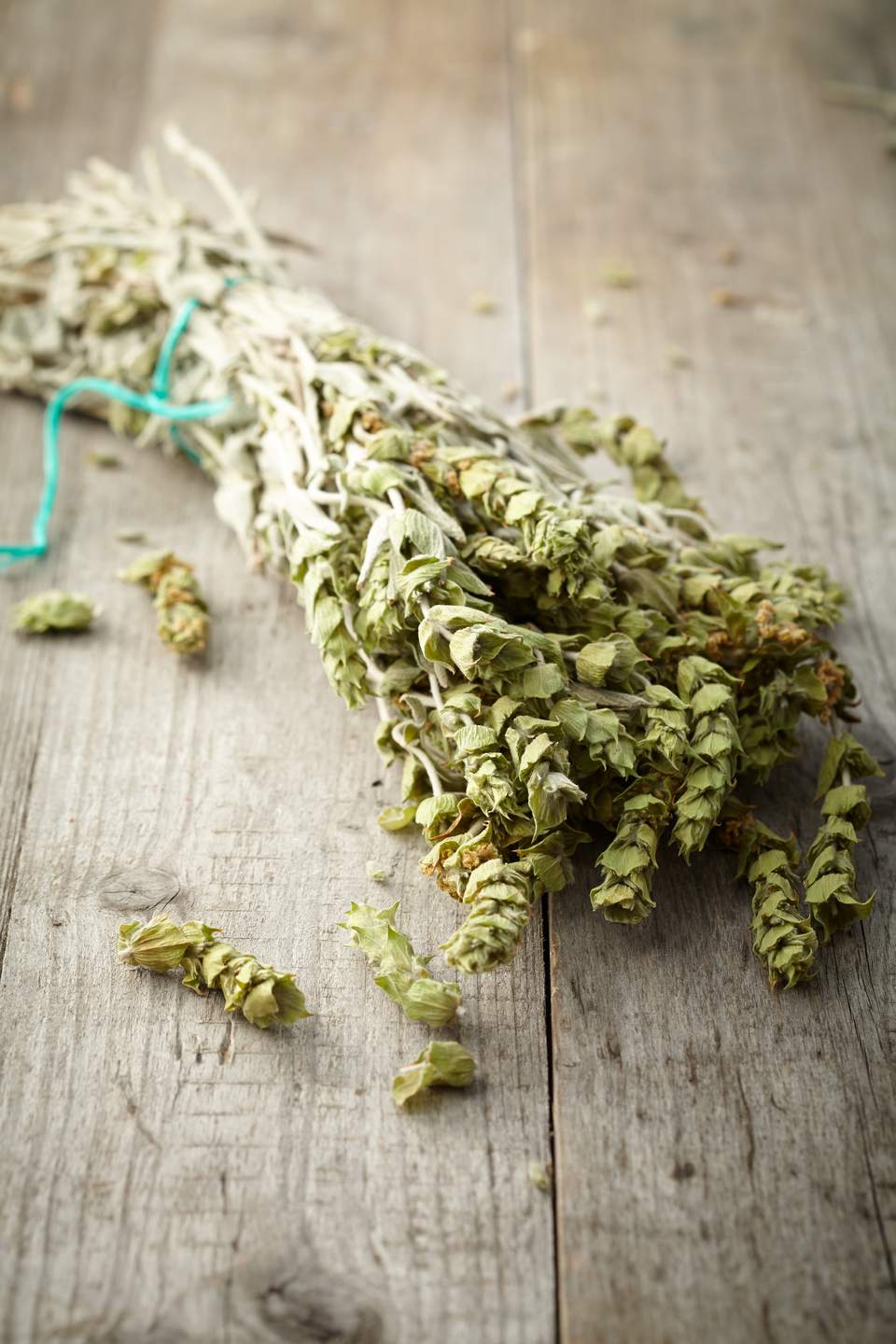 Greek Mountain Tea is made using the dried leaves and flowers of Sideritis plants (ironwort).  The tea made from Sideritis raeseri  is credited with easing a wide range of physical ailments.

On Crete, the common name for Mountain Tea is malotira, and almost every region of Greece has its own name for the brew, such as Olympos tea and Parnassos tea, reflecting the name of the mountain where it grows. The most common English name other than Mountain Tea is Shepherd's Tea because Greek shepherds use the plants to make a brewed tea while tending their flocks high in the hills.

The tea is packaged as loose tea, not as tea bags. Unlike most teas, the flavor is enhanced by boiling the leaves and flowers. For a 10-ounce or 1.5 cup serving:

·       Allow the tea to boil for 3 to 5 minutes depending on your strength preference.

·       Pour the tea mixture through a strainer directly into your cup

Serving suggestion: Serve Mountain Tea at breakfast or before retiring at night with Kalamata olives, feta cheese, and crusty bread.

Mountain Tea is enormously popular in Greece and is brewed most often in winter when levels of physical activity decrease and colds, aches, and pains increase. It is said to have a positive effect on almost anything that ails you but mostly it is used to combat colds, respiratory problems, indigestion and mild anxiety. It is said to bolster the immune system and is valued for its antioxidants, as an anti-inflammatory and to reduce fever.