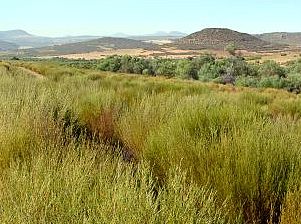 Rooibos (Aspalathus linearis), meaning "red bush"; is a broom-like member of the Fabaceae family of plants growing in South Africa's fynbos. The specific name of linearis comes from the plant's linear growing structure and needle-like leaves.

The leaves are used to make a herbal tea that is called by the names: rooibos, bush tea (especially in Southern Africa), or redbush tea (predominantly in Great Britain), which has medicinal properties only now being fully explored. The tea has been popular in Southern Africa for generations, but is now consumed in many countries worldwide. It is sometimes spelled rooibosch in accordance with the old Dutch.

The South African Department of Trade and Industry issued final rules on 6 September 2013 that protects and restricts the use of the names "rooibos", "red bush", "rooibostee", "rooibos tea", "rooitee" and "rooibosch" in that country, so that the name cannot be used for things not derived from the Aspalathus linearis plant. It also provides guidance and restrictions for how products which include Rooibos, and in what measures, should use the name "rooibos" in their branding. 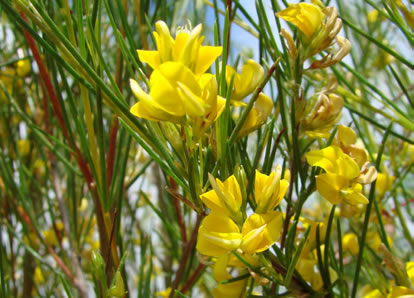 Rooibos is usually grown in the Cederberg, a small mountainous area in the region of the Western Cape province of South Africa.  It grows in a symbiotic relationship with local micro-organisms.

For some time, the plant was not cultivated but gathered by hand in the mountains and Dutch settlers to the Cape learned to drink rooibos tea as an alternative to black tea.  In 1904, Benjamin Ginsberg ran a variety of experiments at Rondegat Farm, finally curing rooibos. He simulated the traditional Chinese method of making Keemun by fermenting the tea in barrels.

Attempts to grow the plant commercially began in 1930, when District Surgeon and botanist Dr Pieter Le Fras Nortier began conducting experiments at Clanwilliam on his farm Eastside and on the farm Klein Kliphuis.  Dr. Nortier's research was ultimately successful and he subsequently showed all the local farmers how to germinate their own seeds. The secret lay in scarifying the seed pods.  Over the next decade the price of seeds soared to an astounding £80 a pound, the most expensive vegetable seed in the world, as farmers rushed to plant rooibos. Today, the seed is gathered by special sifting processes. 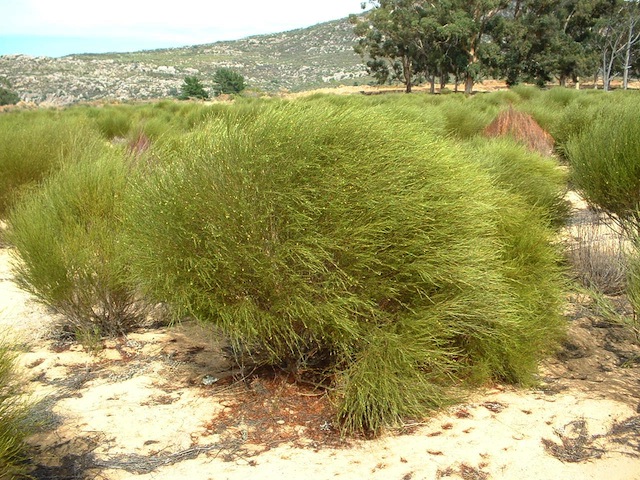 Thanks to Dr Nortier’s research, rooibos tea, originally just an indigenous drink, became a national beverage and then a globalised commodity. Rooibos tea production is today the economic mainstay of the Clanwilliam district.

Researchers speculate, however, that climate change may threaten the future survival of the plant and the R600-million (approximately €43-million in March 2017) rooibos industry. Some claim that increasing temperatures and decreasing rainfall may result in the extinction of the plant within the next century.

As a fresh leaf, rooibos has a high content of ascorbic acid (vitamin C).  Rooibos tea does not contain caffeine and has low tannin levels compared to black tea or green tea.   Rooibos contains polyphenols, including flavanols, flavones, flavanones, dihydrochalcones, aspalathin and nothofagin.  The processed leaves and stems contain benzoic and cinnamic acids. 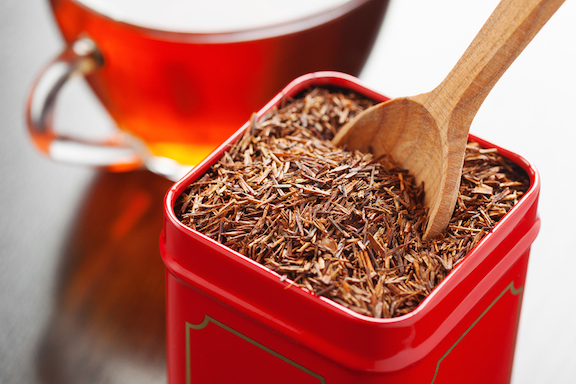 …… rooibos and honeybush are produced for the herbal tea market, …….. A comprehensive discussion of in vitro, ex vivo and in vivo biological properties, required to expand their applications as nutraceutical and cosmeceutical products, is included, with the main emphasis on rooibos.
PMID:  18621121

Rooibos is rich in polyphenols with rooibos a rare source of the dietary dihydrochalcones, aspalathin and nothofagin. 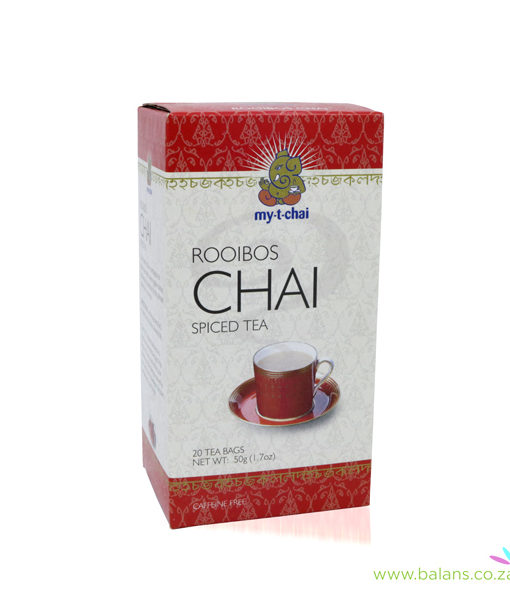 The tea has a taste and colour somewhat similar to hibiscus tea, or an earthy flavour like yerba mate.

Generally, the leaves undergo an oxidation (often termed "fermentation" in common tea processing terminology). This process produces the distinctive reddish-brown colour of rooibos and enhances the flavour. Unoxidised "green" rooibos is also produced, but the more demanding production process for green rooibos (similar to the method by which green tea is produced) makes it more expensive than traditional rooibos. It carries a malty and slightly grassy flavour somewhat different from its red counterpart.

Rooibos tea is commonly prepared in the same manner as black tea and milk and sugar are added to taste. Other methods include a slice of lemon and using honey instead of sugar to sweeten. It is also served as iced tea.

Rooibos grades are largely related to the percentage "needle" or leaf to stem content in the mix. A higher leaf content results in a darker liquor, richer flavour and less "dusty" aftertaste. The high-grade rooibos is exported and does not reach local markets, with major consumers being the EU, particularly Germany, where it is used in creating flavoured blends for loose-leaf tea markets. 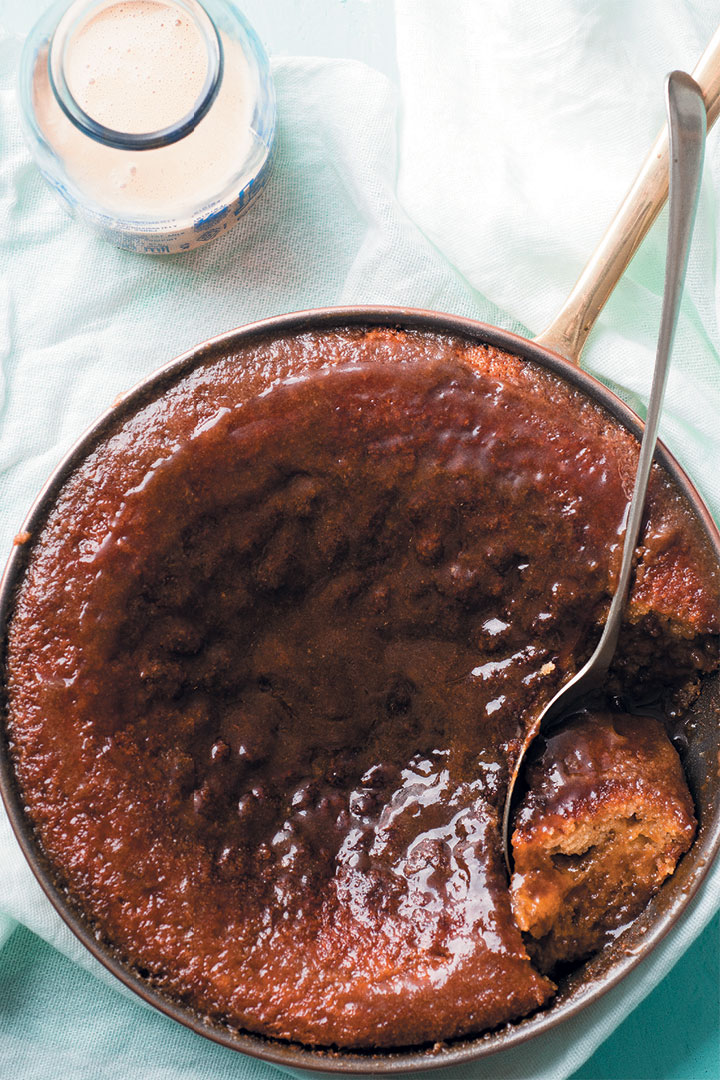 Place the 400ml milk, vanilla essence and Rooibos tea bags in a medium saucepan and bring to a boil.

Remove from heat and discard the tea bags.

Combine the 40g castor sugar, 4 eggs and pinch salt and stir through the warm milk mixture.

Place in a bowl over steaming hot water (not boiling) and stir with a wooden spoon until thickened, about 7 minutes.

(Do not allow the water to touch the bottom of the bowl.)

Strain through a fine sieve and serve with a warm pudding.