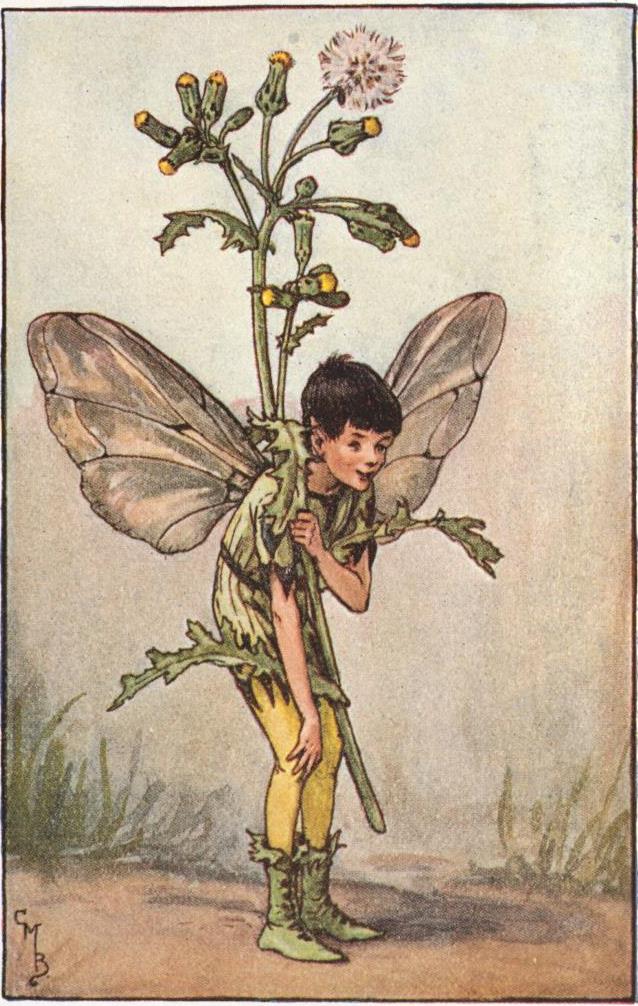 Senecio vulgaris, often known by the common names groundsel and old-man-in-the-spring, is a flowering plant in the daisy family Asteraceae. It is an annual herb, native to Europe and widely naturalised as a ruderal species in suitable disturbed habitats worldwide.

If dicky-birds should buy and sell
In tiny markets, I can tell
The way they’d spend their money.
They’d ask the price of cherries sweet,
They’d choose the pinkest worms for meat,
And common Groundsel for a treat,
Though you might think it funny.

Love me not, or love me well;
That’s the way they’d buy and sell

Senecio vulgaris is an erect herbaceous annual growing up to 16 inches (45 cm) tall. The inflorescences usually lack ray florets, the yellow disc florets mostly hidden by the bracts giving the flowers an inconspicuous appearance. Senecio vulgaris is very similar to Senecio viscosus but S. vulgaris does not have the glandular hairs and ray florets found in S. viscosus. 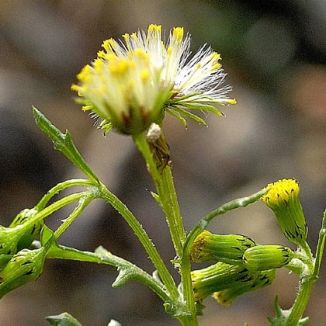 Leaves and stems
Upper leaves of Senecio vulgaris are sessile, lacking their own stem (petiole), alternating in direction along the length of the plant, two rounded lobes at the base of the stem (auriculate) and sub-clasping above. Leaves are pinnately lobed and +2.4 inches (61 mm) long and 1 inch (25 mm) wide, smaller towards the top of the plant. Leaves are sparsely covered with soft, smooth, fine hairs. Lobes typically sharp to rounded saw-toothed.

The hollow stems branch at the tops and from the base. Stems and leaves can both host the Cineraria leaf rust.

Open clusters of 10 to 22 small cylinder shaped rayless yellow flower heads ¼ to ½ inch (6 to 13 mm) with a highly conspicuous ring of black tipped bracts at the base of the inflorescence as is characteristic of many members of the genus Senecio. There is a radiate form of Senecio vulgaris, which is the result of cross pollination with the closely related Oxford ragwort, Senecio squalidus. The name for the genus Senecio is probably derived from senex (an old man), in reference to its downy head of seeds; "the flower of this herb hath white hair and when the wind bloweth it away, then it appeareth like a bald-headed man" and like its family, flowers of Senecio vulgaris are succeeded by downy globed heads of seed. The seeds are achene, include a pappus and become sticky when wet. Laboratory tests have suggested maximum seed scattering distances of 4.2 and 4.6 yd (1.9 and 2.9 m) at wind speeds of 6.8 and 10.2 mph (10.9 and 16.4 km/h) respectively (affected by plant height), suggesting that it was more than wind that spread these groundsel seeds throughout the world.

The average weight of 1000 seeds is 0.21 gram (2,200,000 seeds per pound) and experienced a 100% germination success before drying and storage and an 87% germination success after drying and 3 years of cool dry storage. In simple models for seed emergence prediction, soil thermal time did not predict the timing and extent of seedling emergence as well as hydrothermal time (warm rain).

The root system consists of a shallow taproot. This plant spreads by reseeding itself. It appears that at one time grounsel was employed externally for skin complaints such as ulcers, for example:

This article tells the story of an eighteenth-century medical pamphlet called An essay on the nature and cure of the King’s Evil, deduced from observation and practice. This was written by John Morley (d. 1776/7), a wealthy Essex landowner who advertised free medical treatments. The pamphlet is one of many short tracts on scrofula produced after the ceremony of ‘the royal touch’ ceased with the death of Queen Anne. However, it merits special attention from historians of medicine and historians of the book because it was edited and reprinted many more times than other surviving scrofula tracts: 42 editions appeared between 1760 and 1824. This suggests significant popularity...................... in one instance, an ulcer on the ankle is treated by Morley with a vervain root, jalap, scraped carrot and a poultice of groundsel, mallow, pork lard and oatmeal (Morley, 1774, p 58).

see the observations for more examples