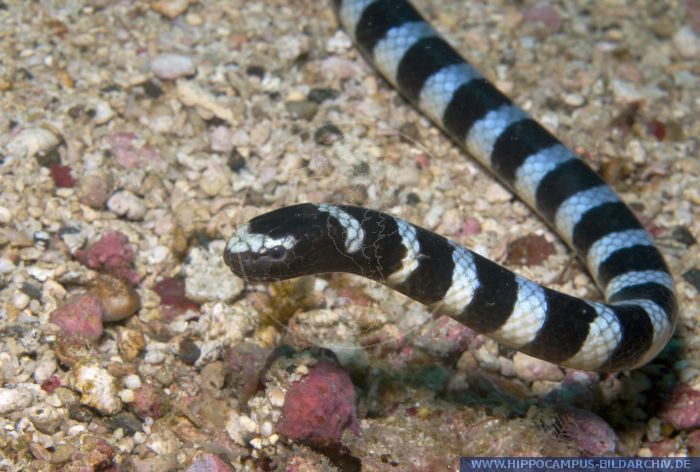 The black-banded sea krait, or Chinese sea snake (Laticauda semifasciata), known in Japan as erabu umi hebi (ja:エラブウミヘビ), and Okinawa as the irabu, is a member of the Laticauda genus of sea snakes. It is found in most of the warm wāters of the western Pacific Ocean.

This high snake frequents coral reef areas. It has a short head, thick trunk, and no easily discernible neck. The tail is simply extended skin, spread wide like a fin, and unsupported by any projection. The stomach is comparatively wide. Massing together near the shore, they breed between narrow cracks in the reef and in caves. It is a nocturnal snake, rarely seen during the day. It breathes air, so breaks the surface at least once every six hours.

It is too slow to catch fish in a straight chase, so it hunts for fish hiding in the coral. Alternately, gathering in the hundreds, black-banded sea kraits form hunting alliances with yellow goatfish and bluefin trevally, flushing potential prey from narrow crannies in a reef the same way some moray eels do.  The bite is highly venomous and paralyzes the prey. 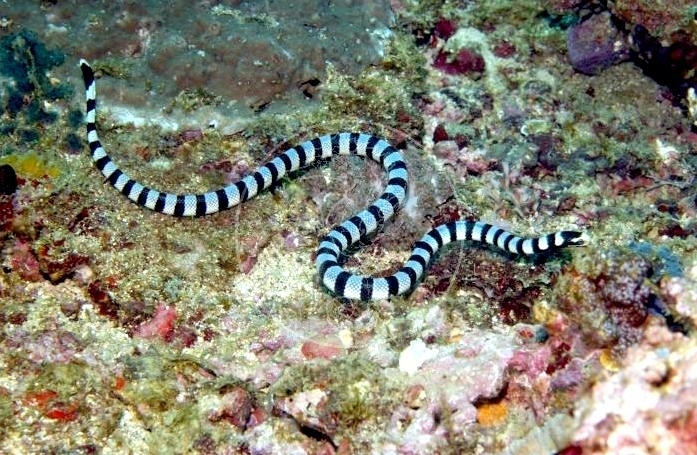 Females lay their eggs on land.

Generally, the species is found in Fiji, southern Japan and Singapore. Their venom is ten times stronger than that of a cobra, making them extremely dangerous. This snake does not bite humans unless it feels threatened.

The erabu snake is a winter staple in southern Japan, where it is believed to replenish a female's womanhood. Irabu soup irabu-jiru (ja:イラブー汁)[4] is said to taste like miso and a bit like tuna. This soup was a part of the royal court cuisine of Ryukyu Kingdom; it is thought to have analeptic properties.

It also has a place in Chinese medicine, the observations provide more background.