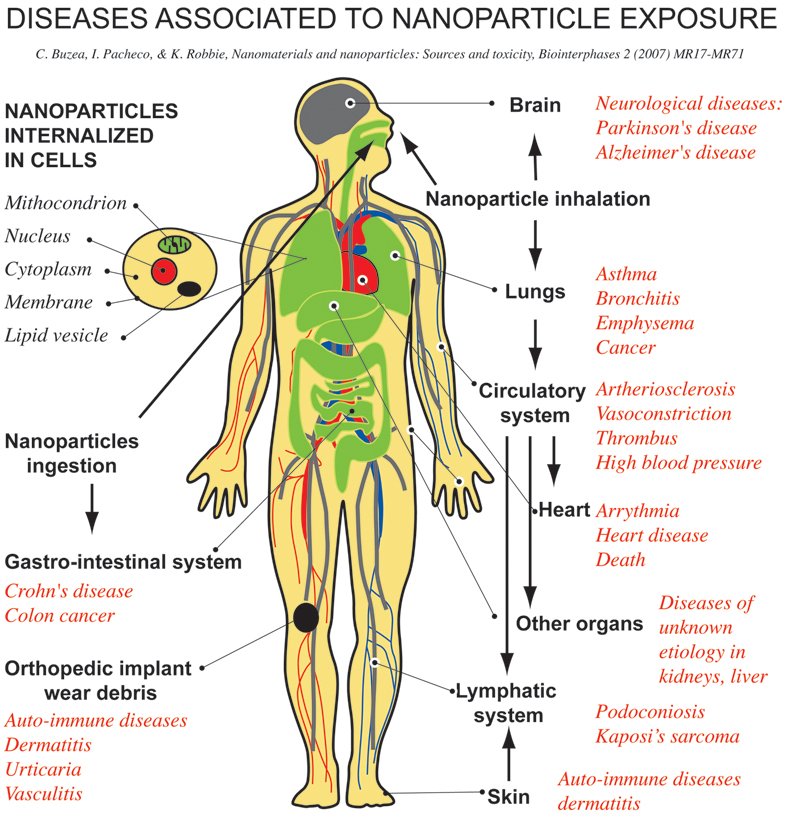 A particle is defined as a small object that behaves as a whole unit with respect to its transport and properties. Particles are further classified according to diameter:

In effect according to the IUPAC definition a nanoparticle is 'A Particle of any shape with dimensions in the 1 × 10−9 and 1 × 10−7 m range.  Nanoparticles are also sometimes called  "ultrafine particles" (UFP).

Nanoparticle research is currently an area of intense scientific interest  with scientists imagining a wide variety of potential applications in biomedical, optical and electronic fields.  This research has been further fuelled by The National Nanotechnology Initiative, which  has led to generous public funding for nanoparticle research in the United States.

But alarm bells have already started to ring in the 'green' sector over the effects these particles have on the environment and on health.  Papers have started to appear already on the links between nanoparticles and cancer, lung diseases such as COPD, eye problems, and brain damage – amongst many other effects.

The following is but one example, and explains the problem well

Metal oxides may hold, as nanosized particles, a toxic potential to human health and the environment that is not present in the bulk material. Due to the high surface-to-volume ratio, small amounts can lead to strong oxidative damage within biological systems, impairing cellularfunctions as a consequence of their high surface reactivity. We report here on a new nanosized V203 material that has a needle-like structure with diameters of less than 30 nm and variable lengths. The potentiated toxicity of nanoscale vanadium oxide (V203) compared to bulk material is demonstrated here in human endo- and epithelial lung cells, and might be due to the higher catalytic surface of the particles. Reduction in cell viability is almost ten times stronger and starts with lowest concentrations of "nanoscaled" material (10 microg/mL). Vanadium oxide leads to an induction of heme oxygenase 1 (HO-1) in a dose dependent manner in ECV304 cells whereas a reduction in protein levels can be observed for the epithelial cells (A549). Lipid peroxidation can be observed also for "nanoscaled" vanadium oxide to a much stronger extent in macrophages (RAW cells) than for bulk material. The observed effects can not only be explained by oxidation from V2O3 to V2O5 as there are significant differences between the novel nano vanadium and all used bulk materials (V203 and V205). It appears rather to be a nanoeffect of a high surface reactivity, here coupled with a yet unknown toxicity potentiating effect of a technically important catalyst.  PMID:  17265967

....DNA damage occurs chemically or physically by nanomaterials. Chemical and physical damage are associated with point mutation by free radicals and double strand brake, respectively. The failure of DNA repair and accumulation of mutations might occur when inflammation is prolonged, and finally normal cells could become malignant. These free radicals can not only damage cells but also induce signaling molecules containing immunoreaction. Nanoparticles and asbestos also induce the production of free radicals. .... Taken together,... a variety of diseases [may be] induced by nanomaterials. PMID: 25097864