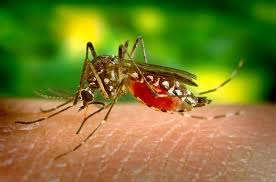 Yellow fever is an acute viral haemorrhagic disease transmitted by the bite of female mosquitoes (the yellow fever mosquito, Aedes aegypti, and other species).  It is found in tropical and subtropical areas in South America and Africa, but not in Asia.  The only known hosts of the virus are primates and the mosquito.

Since the 17th century, several major epidemics of the disease have been recorded in the Americas, Africa, and Europe. In the 19th century, yellow fever was deemed one of the most dangerous infectious diseases.

The WHO estimates that yellow fever causes 200,000 illnesses and 30,000 deaths every year in unvaccinated populations; today nearly 90% of the infections occur in Africa. 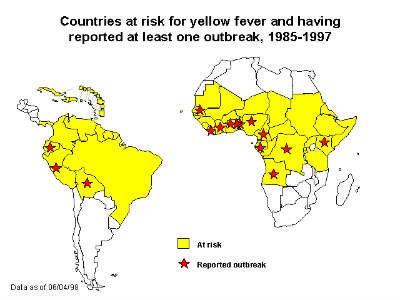 Since the 1980s, the number of cases of yellow fever has been increasing, making it a re-emerging disease. Part of the problem appears to be that the virus is mutating.

Yellow fever causes fever, chills, anorexia, nausea, muscle pain (with prominent backache) and headache, which generally subsides after several days. In some patients, a toxic phase follows, in which liver damage with jaundice (which is what gave the disease its name) can occur and lead to death.

Because of the increased bleeding tendency (bleeding diathesis), yellow fever belongs to the group of haemorrhagic fevers.

The yellow fever virus (YFV), the first proven human-pathogenic virus, although isolated in 1927, is still a major public health problem, especially in West Africa where it causes outbreaks every year. Nevertheless, little is known about its genetic diversity and evolutionary dynamics, mainly due to a limited number of genomic sequences from wild virus isolates. In this study, we analyzed the phylogenetic relationships of 24 full-length genomes from YFV strains isolated between 1973 and 2005 in a sylvatic context of West Africa, including 14 isolates that had previously not been sequenced. By this, we confirmed genetic variability within one genotype by the identification of various YF lineages circulating in West Africa. Further analyses of the biological properties of these lineages revealed differential growth behavior in human liver and insect cells, correlating with the source of isolation and suggesting host adaptation. For one lineage, repeatedly isolated in a context of vertical transmission, specific characteristics in the growth behavior and unique mutations of the viral genome were observed and deserve further investigation to gain insight into mechanisms involved in YFV emergence and maintenance in nature. PMID: 23269797

A vaccine against yellow fever has existed since the middle of the 20th century, and some countries require vaccinations for travellers. As Wikipedia says "Since no therapy is known, vaccination programs are of great importance in affected areas, along with measures to prevent bites and reduce the population of the transmitting mosquito".

The fly in the ointment is that the virus is mutating and it is clear that the vaccines aren't always effective.  They may even be helping with mutation.  This poor person got encephalitis from the vaccine

The virulence of a yellow fever (YF) virus (P-16065) isolated from a fatal case of vaccine-associated viral encephalitis was investigated. P-16065 appeared identical to its parent vaccine virus (17D-204 USA, lot 6145) when examined with monoclonal antibodies except that YF wild type-specific MAb S24 recognized P-16065 but not 17D-204 USA 6145. Thus, a mutation of at least one epitope on the envelope (E) protein had occurred. Unlike 17D-204 USA 6145 and other 17D vaccine viruses, P-16065 was neuroinvasive and virulent for mice after intranasal inoculation, and neurovirulent for monkeys after intracerebral inoculation. The E protein of P-16065 differed from 17D-204 USA by two amino acids at positions 155 and 303. Changes at amino acid position 155 are found in other YF vaccine viruses that are not neurovirulent, and it is therefore postulated that the change at position 303 is involved in the alteration of the phenotype of P-16065 and may be important for virulence of YF virus. PMID: 7908925 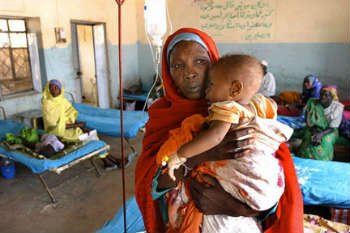 Fever and hyperthermia is the principal cause of spiritual experiences, exacerbated by  loss of blood and haemorrhaging

I have provided only one observation which is clear cut because the waters are muddied considerably in the older observations by the influence of opium – notably laudanum.

It is not widely recognised I suspect just how influential opium was in giving our Victorian ancestors a view of heaven.   By the 19th century, laudanum was used in many patent medicines to "relieve pain... to produce sleep... to allay irritation... to check excessive secretions... to support the system... [and] as a soporific”

Innumerable Victorian women were prescribed the drug for relief of menstrual cramps and vague aches. Nurses also spoon-fed laudanum to infants. The Romantic and Victorian eras were marked by the widespread use of laudanum in Europe and the United States.

Large sections of the population were actually addicted.