United Nations Convention Against Torture (an advisory measure of the UN General Assembly)
[tortue is defined as ]...any act by which severe pain or suffering, whether physical or mental, is intentionally inflicted on a person for such purposes as obtaining from him, or a third person, information or a confession, punishing him for an act he or a third person has committed or is suspected of having committed, or intimidating or coercing him or a third person, or for any reason based on discrimination of any kind, when such pain or suffering is inflicted by or at the instigation of or with the consent or acquiescence of a public official or other person acting in an official capacity. It does not include pain or suffering arising only from, inherent in, or incidental to, lawful sanctions.

Torture is actually prohibited under international law and the domestic laws of most countries. It is considered to be a violation of human rights, and is declared to be unacceptable by Article 5 of the UN Universal Declaration of Human Rights. Signatories of the Third Geneva Convention and Fourth Geneva Convention officially agree not to torture prisoners in armed conflicts. Torture is also prohibited by the United Nations Convention Against Torture, which has been ratified by 147 states.

But, of course, it still happens.

National and international legal prohibitions on torture derive from a consensus that torture and similar ill-treatment are immoral, as well as impractical – impractical because in a sense they don’t work.  A tortured person who ‘confesses’ has simply spoken to stop the pain.

The following examples of what man did to his fellow man in the past should send waves of horror up your spine.  My pal Tony found them for me, knowing full well that I would have been too sensitive to search for this sort of stuff and also knowing full well that this is not a subject that should be trivialised.  If ever there was hell, this is it and man created it.

The examples shown here were used from the Middle Ages to 1975.  Yes you have read this right 1975.  And the last man to suffer torture by these methods was innocent, although using any of these on anyone is unforgivable - 'innocent' or 'guilty'.

There is 'over representation', shall we say, by the Catholic Church and the Inquisition. 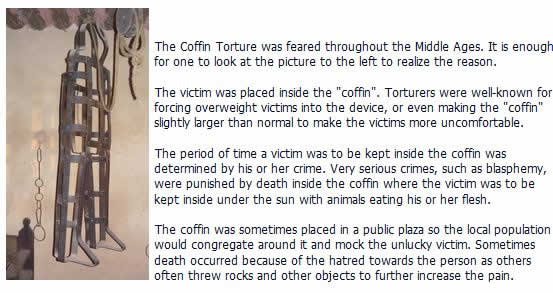 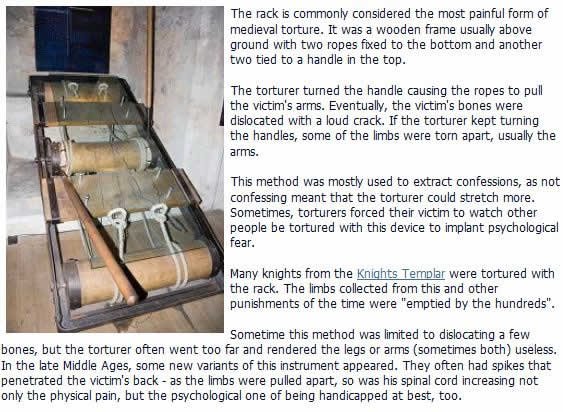 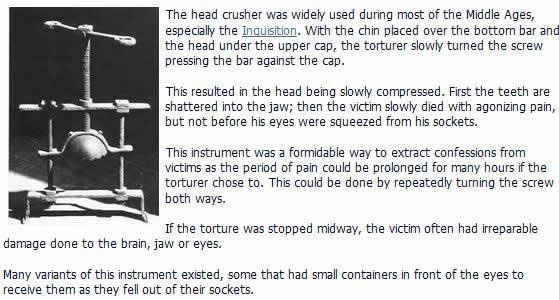 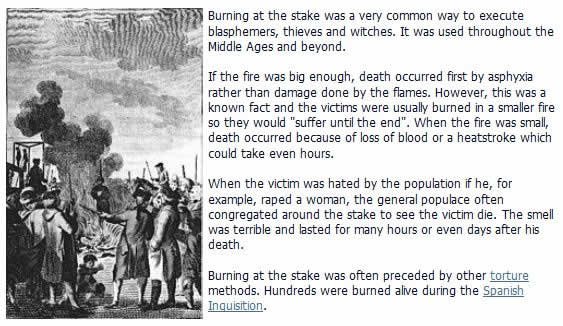 The two mechanisms used the most for torture are the use of extreme pain - perhaps more correctly described as unimaginable pain - and overwhelming fear and terror, however, sleep deprivation is also used and caused by torture.

All have caused some quite profound experiences.

In one of the ironies of this event, many religious people have inflicted upon themselves, tortures almost as bad as those inflicted by their Churches and obtained no experiences at all, except the occasional hallucinations of demons.  In contrast those their Church has tortured, have had any number of experiences, out of body, angels, visions and so on.

One of husband's ancestors was burnt at the stake for 'heresy' - an early Quaker.  May she rest in peace.