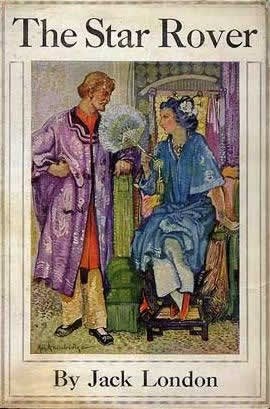 The Star Rover is a novel by American writer Jack London published in 1915. It is fiction but based on a series of interviews that Jack London had with a prisoner in San Quentin – so fact.

The story is told in the first person by Darrell Standing, a university professor serving life imprisonment in San Quentin State Prison for murder. Prison officials try to break his spirit by means of a torture device called "the jacket," a canvas jacket which can be tightly laced so as to compress the whole body. Standing is sensorily deprived as well as befuddled by the pain he experiences and as a result of the torture experiences an out of body state, in which he walks among the stars and experiences portions of past lives.

Each chapter describes a different experience and although the book is supposedly fiction, the wording and power of the language make one feel that behind the fiction is quite a substantial quantity of fact – as was common with London’s writing.

The jacket itself was actually used at San Quentin at the time and Jack London's descriptions of it were based on interviews with a former convict named Ed Morrell. Innocent Ed Morrel spent five years in solitary. Thanks to Jack London, Morrel's case got re-opened and he was subsequently released.

I trod interstellar space, exalted by the knowledge that I was bound on vast adventure, where, at the end, I would find all the cosmic formulae and have made clear to me the ultimate secret of the universe. In my hand I carried a long glass wand. It was borne in upon me that with the tip of this wand I must touch each star in passing. And I knew, in all absoluteness, that did I but miss one star I should be precipitated into some unplummeted abyss of unthinkable and eternal punishment and guilt.