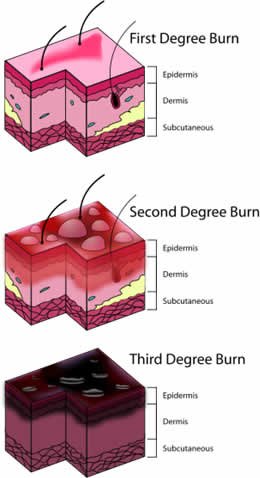 A burn is damage generally to the skin and the underlying epidermal tissue and dermis caused by heat, electricity, chemicals, light, radiation or friction.

Really serious burns may go deeper and affect the tissue underlying the skin – muscle [and fat] blood vessels and even down to the bone.

Anyone who has burnt themselves on for example, a cooker, or scalded themselves with boiling water will know without being told that they are excruciatingly painful.  They can result in shock and respiratory distress when serious.

The seriousness of burns is generally classifed into three [or four in some cases].  The classification is based on the depth of penetration of the burn and as a consequence the degree of damage and destruction to the skin and its underlying layers.

The  diagram on the right shows the three major classes.  A third degree burn [and fourth degree if this classification is used] is the most serious and does a great deal of deep damage.

A person who has suffered third degree burns will generally be hospitalised, as they lose the top layer of skin and some of its underlying tissue, leaving themselves very vulnerable to infection.  Doctors these days use artificial skin or skin grafts in an attempt to cover the open wounds, however, the risk of infection is still very high even with these protective measures.

The other serious consequence of a third degree burn is the loss of fluid.  If the wound is extensive, fluid loss can be significant, along with electrolyte loss.  Treatment of burns patients involves the protection of the wound from infection, but also attempts via the grafts and artificial skin to stem fluid loss.  In the meantime, fluids together with electrolytes are usually administered via a drip [along with pain killers].

Burns of 10% in children or 15% in adults (or greater) are potentially life threatening injuries (because of the risk of shock) and require formal fluid resuscitation and monitoring in a burns unit. Burns units will use surface area to predict severity and mortality. 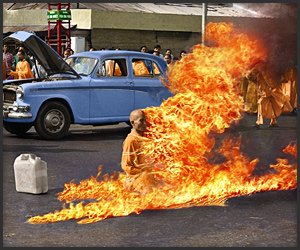 The spiritual experience is not caused by one single factor but is usually caused by a combination of factors, the chief of which are  in physical terms:

Functionally, however, being burnt as badly as this and suffering from all the effects above, is understandably regarded by the body as a threat.  The messages being received from all the sensory systems is HELP HELP HELP – we are dying!!!!  DO SOMETHING!!

During the lead in to the experience, there will be a gradual shut down of function that will be evident in reduced reasoning power and memory.  A body in this much distress is, in effect, gradually shutting down. And in cases where the body is shutting down it reverts to core autonomic system functions – the functions it needs to maintain itself.

The Will gets all these messages but is unable to do anything.   But it is being bombarded by messages of total panic from the body –  HELP HELP HELP.

At which point it gives up and the composer takes over.  And we have a spiritual experience.